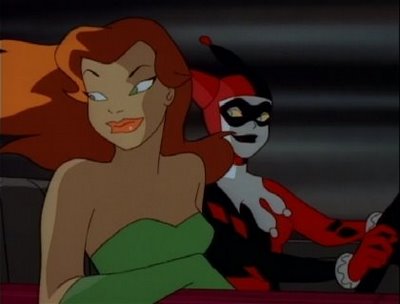 “Harley and Ivy,” is one of the more poignant episodes in “Batman: The Animated Series,” though it’s execution isn’t the best. The premise is Joker is being his usual abusive self to Harley Quinn. He kicks her out and she begins to go on a stealing spree to impress him that changes into a stealing spree for herself when Poison Ivy takes her under her wing and the two team up to be quite a crime duo. From here the story unfolds.

Pros: The Joker – The Joker’s abusive sociopathicness is captured really well in this episode. You see how he never recognizes how much Harley helps and how Harley is his punching bag and that he sees Harley Quinn as property. If you already didn’t have reason to hate the Joker, this one is it. In this episode he represents every abusive partner or spouse. You see how much he depends on her to keep his life running since his fort goes to hell in regards to how the Hyenas’ view him and how disorganized it is once she is gone.

Batman – Batman is just kind of there, but it is great to see him fall to Harley and Ivy when teamed up but beat the Joker. He is also the one to find out where Ivy’s hideout is through detective work verses the Joker tracking the call.

Renee – Is meant to be the counter to Harley and Ivy since she is the woman who takes them both down after they’ve taken down Batman. She does it in a Batmanesque way too by booby trapping the street to stop their car.

Harley Quinn – Is the co-dependent partner and “Spouse” of the Joker. After every abuse she comes back and keeps thinking they can work it out. It is powerful how she is a character that was inspired by a real person and that real people like her exist who can’t get out of those types of situations. When she’s going through empowerment via the tutorship if Poison Ivy she is on top of her game…stealing, overturning Old Boys Clubs and even managing to nearly destroy Batman. It is a shame that she never comes out from under the Joker’s shadow until much later in life in the cannon.

Poison Ivy – Is the mentor to Harley. She misses that women can be bad too but nails the abusiveness prevalent among men as represented by the Joker. She is always presenting the alternative view and doing all she can to help Harley move on. Sadly she doesn’t succeed, but it isn’t from lack of trying.

The Friendship and Romance – It is played up in the comic of the same name but Harley and Poison Ivy are implied to be Bisexual. This is the first time we really see this too. Though in this episode Harley does play as more of a friendship because of her obsession with the Joker. There are romantic moments and tension though, which is great! It is a shame it isn’t more common in comics. These two are a great paring due to how well they compliment each other like Batman and Robin.

The Message – The message has a great intent. Don’t put up with abuse and embrace freedom of the self. The main issue I’d say is it being through the eyes of villains which may hurt the argument…The theme of the empowerment of women is pulled off pretty well in this episode though.

Okay: Show Don’t Tell – Poison Ivy’s quips end up taking away from the message of the episode. We see them being powerful and doing acts to upset the patriarchy. It doesn’t really need to be announced every time, it would have been more powerful without that actually. This is the one reason I can’t give it full points. Showing not telling is the best way to tell any story.

I definitly recommend this episode. The message is great even if the execution of it could be better and Harley and Ivy are great characters who I wish could have teamed up more.