“Quarantine” begins with the words – “In 2011 the ‘Simian Flu’ Virus spread across Major U.S. Cities. With no known cure, global efforts focused on containment.”

“Quarantine” is powerful, showing a couple in love at the beginning just trying to live, it takes place in year 1 of the outbreak…during this year there is the birth of their daughter and the mother being put in containment. From here we see the Father’s downfall as he breaks into a man’s home to still his food for his dying wife. The visuals are great, and my biggest problem is the electronic music in the background…it distracts from the scenes that are taking place, and we never see the daughter’s reaction to her father beating a man to death. Though we do get a flashback of the mother when she was dragged to containment. Still a good short film though. 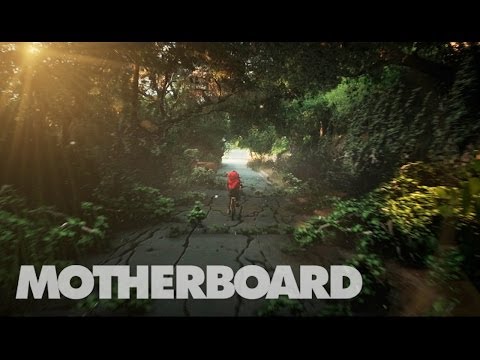 “All Fall Down,” achieves what it needs to do to show that this is no longer the world of the humans. This takes place in Year 5 of the outbreak. We see a single mother raising her son…recounting to us how nearly all of humanity is dead and that there is danger lurking in the darkness. We see what the world has become “With people trading things they need for what they want…memories of a world they will never have again.” It is powerful and ends with an ape raiding the mother’s food (which we never see the ape proper…just it’s eyes from the darkness). It ends with the feel of humanity under siege. It does just what it needs to do to capture the desolation of humanity and the foreboding danger of the rise of the apes.

“Story of the Gun”

“Story of the Gun,” tells the story of the fall of man over the course of 10 years using a gun as way to do so. We first begin 10 years later with a man running from apes shooting wildly, before we flash to the past. The first owner is a boy who is learning how to hunt with his dad, after he trades the gun away for supplies and medicine it goes to a mother infected with flu trying to protect her kids after her a U.S. Marshall gets the gun and goes from law abiding to attacking a Latino family for supplies…he is later killed by one of the roving gangs. After the owner is a slightly mad conspiracy nut who ends up killing himself after his gang gets killed and he realizes he is alone in the home they’ve commandeered…last is the man we saw the beginning who is trying to protect his adopted daughter. They are in the forest when we hear the apes attack, he drops the gun and we see an ape’s shadow standing over it.

This film is the most ambitious, and it mostly succeeds. It’s biggest problem is it should have been longer. The second woman who owns the gun gets no exploration at all and we don’t see what the conspiracy guy was like before the fall in his memories…same goes for the last guy who mostly functions to show the threat of the apes and functions less as a character.

These are all solid productions and I’d rate the whole overall as a 9 / 10.