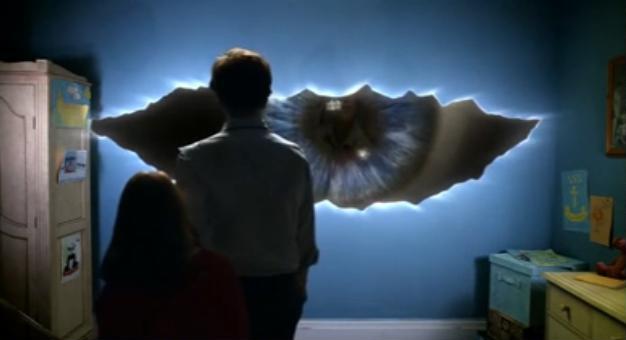 We continue 12 Days of Doctors with “The Eleventh Hour” the first episode in Series 5 and the introduction of Matt Smith as the 11th Doctor as well as his main companion for this season, Amy Pond. The episode was written by Steven Moffat, who became the showrunner after this point (for better and for worse) and was directed by Adam Smith.

The story of “The Eleventh Hour,” is that the Doctor’s TARDIS is nearly destroyed after his regeneration so he needs to get it fixed and healed up, so he arrives at the home of Amelia Pond where his TARDIS crashes and she helps him heal. They than go to her room where the Crack in Time is and the Atraxi send out a warning that Prisoner Zero has escaped. The Doctor than jumps forward to fix his TARDIS, but jumps forward too far and Amy is no longer a little girl. Together they must stop Prisoner Zero from causing the Atraxi from destroying the Earth as well as re-establishing that he is the same Doctor she met as child and their current relationship.

The Pros: The 11th Doctor / The Eleventh Doctor – Matt Smith is the Peter Pan Doctor, he is the Doctor who will whisk you away from reality and takes joy in the little things, and also the one who is openly pretty full of himself and confident, as well as oblivious. It is thanks to Amy Pond that he survives his regeneration when he is trying to find his footing and how Prisoner Zero is defeated. He has eccentricities and also has some of the Tenth Doctor’s savvy, though he is much more of the child-like Doctor than David Tennant’s as everything is extreme with him, and he is earnest, even when he lies…which he does a lot. Matt Smith definitely deserves his place among the Doctors and is one of the most joyful to watch.

Amelia Pond / Amy Pond – We see Amy when she is a little girl, alone in her house with a haunting crack in her wall, and grown up when she’s a kiss a gram with a boyfriend. After watching this episode, I think some of the criticism against her character isn’t as deserved. She is Independent, to the point that she takes action when her boyfriend Rory does not, she risks the adventure at the end with the Doctor and she holds her own against Prisoner Zero…her boogeyman from childhood beyond the mysterious crack throughout the episode. The Doctor is only able to defeat Prisoner Zero because of Amy facing her fears making her an active agent with a lot of agency in this episode. Also, as a small thing…she’s the one pulling the Doctor and telling him to run, which is a nice subverting of the usual Doctor/Companion relationship. Karen Gillian is fantastic.

Rory – We only see him briefly, but he helps fight against Prisoner Zero with the evacuating of the hospital and he is the one who helps the Doctor figure out Prisoner Zero is masking itself from the Atraxi by tapping into people’s dreams who are in a coma. You see how powerless he feels for a lot of it too, as Amy doesn’t admit they are a couple to the Doctor. He still does quite well though and respects Amy.

Prisoner Zero – What an awesome baddie, this enemy who committed unknown crimes is the haunting space eel thing that can shape shift into multiple people, but can’t match the voices to the bodies. It is a good threat and wants to let the world burn rather than be caught again, so it’s motivation makes sense. It also gives the Doctor the warning that “Silence Will Fall,” which is a major plot point over Eleven’s Arc. The fact that it takes the Doctor and Amy together to defeat it along with the Atraxi is a testament to it’s power. Also it has the Moffat playing with senses deal as it’s true form can only be seen from the corner of your eye.

The Atraxi – Giant Space Crystal’s with large eyes…unless that is what their ships are…these guys are good Galactic Police as they cannot see beyond their own people until the Doctor reminds them that they can’t bully other planets or the Earth in their hunt for criminals or simply just because. He shows them the planet is defended.

The Doctor Revealed – The best reveal of the Doctor as a Time Lord happens in this, both as him visiting Amy as a child and when she is grown and his unawareness of how much time has passed, and at the end when the Atraxi scanning screen reveals how all the Numbered Doctors from 1-10 have defended the Earth. We see their images, ending on a big picture of Ten before Eleven walks through and tells them, “Basically, run.”

The cinematography – Is the best it’s ever been. This is a beautiful episode and it captures the mystery and subtext of scenes very well, as well as the threats of the Atraxi and Prisoner Zero.

The Music – This is some of Murray Gold’s best work, from Amy’s scene, to the Doctor Triumphant and the music inbetween. Definitely one of my favorite composers.

I highly recommend this episode. It keeps the fairy tale theme that is referenced in the episode, but unlike the fairy tale theme…the princess doesn’t need to be saved. The Doctor and Amy work together, and Rory too defeat the threats that appear and they are treated like fully fleshed out characters. Prisoner Zero is a great threat as are the Atraxi in their obliviousness and Matt Smith as the Peter Pan Doctor is a pleasure in all the joy he takes out of things. Definitely the best episode thus far…I’m curious how “Deep Breath” and the 12th Doctor are going to compare now…we shall see. Until then, bow ties are cool.

10 / 10. Good enemy, great Doctor, companions are partners against the threat, great music and cinematography, and establishes the Doctor as a Time Lord, that there were Doctor’s who came before, and his role as defender of the Earth.