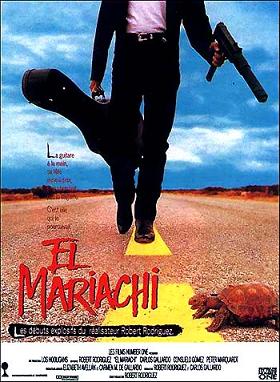 Robert Rodriguez is one of the directors I’ve come to really respect. He has a unique style to his work, and he was one of the first people who’s movies I reviewed, and the first first of his “Mexico Trilogy” I reviewed, as “Desperado” is one of my earliest reviews on this blog:

So it was great to go back and see the movie that started his style and made him an indie name that later made his doing “Sin City” and other larger films possible.

“El Mariachi” as said above was directed by Robert Rodriguez, who also produced and wrote the film. The other producer credit goes to Carlos Gallardo who also played El Mariachi.

The story begins with a case of mistaken identity as a wandering El Mariachi (Carlos Gallardo) tells about his arrival in a town and how he travels playing at bars to experience. In this town a drug criminal named Azul (Reinol Martínez) escaped and is dressed similar to him and is out for revenge against the mob boss Moco (Peter Marquardt) for putting him in prison in the first place. After he kills Moco’s men El Mariachi arrives in town and all believe him to be Azul. From here the story unfolds as El Mariachi tries to adapt to his new situation and survive as Azul seeks revenge.

Here is the assessment of the film:

The Pros: The Music – The music in the film is one of the best parts, though it isn’t always consistent. It does a good job of creating tension though and all the mariachi songs are really beautiful, like in “Desperado.” I think the reason it isn’t consistent is a lot of people were working on music: (Eric Guthrie, Chris Knudson, Álvaro Rodriguez, Cecilio Rodriguez
Mark Trujillo). Again, when it is good it’s really good, when it’s not it feels very raw and rocky…much like the film itself.

The Action – The action is better in “Desperado” but considering this is Rodriguez’s first movie, it still manages to have good action. There are a lot more stunts and blood splatters but most of the great action takes place in confined spaces giving a greater sense of urgency to scenes. Also the first fight El Mariachi gets in where he manages to kill 4 men in self defense is well done, he uses his guitar case as a bludgeon and the weapons of his enemies against them.

El Mariachi – Antonio Banderas is a much better El Mariachi but Gallardo still does a good job. His Mariachi is much more like a teenager who has innocence to all of his actions and the overconfidence of a guy who knows he’s good looking. Antonio’s El Mariachi is a mixture of danger and sensitivity, while Gallardo’s is all kindness and adaptability. He lives for being a musician which makes when he loses his lover Domino to Moco out of spite and loses his hand…his killing of Moco makes sense. This film is really about El Mariachi’s loss of innocence, and shattered dreams…and it’s pulled off decently.

Azul – This guy is one of the most dangerous and funniest criminals. He sleeps with three women who are all highly armed, he goes into bars to have a drink in a bottle before paying and leaving…and at his core he is kind. He points out to Moco how evil Moco is, “I would never kill an innocent, but you…” Moco says that’s why he was put in charge before killing him making his death a tragedy. He really is one of the most well rounded characters in this movie and Reinol owns this role.

Domino – Awesome protagonist! Her death means something largely because her slowly falling in love with El Mariachi feels real. She almost castrates him when she thinks he’s Azul, but comes around due to Mariachi’s kindness and talent on the guitar. She helps Azul get to Moco too in the final showdown but doesn’t make it out as Moco hates her for falling in love with El Mariachi. Conseulo Gomez does a good job. Also as great as she was Salma Hayek was better, Hayek was much more active as a character and as an actress she has more charisma in her role as Carolina.

Okay: Cinematography – The cinematography is choppy. At times it is sped up and the speeding up makes sense, other times the speeding up clashes with everything. You can tell it is Rodriguez’s first work as it does feel really raw. This isn’t bad per say, but it isn’t a pro in it’s favor either.

Con: Moco – Moco is bland. We seem him with a woman in every scene as he sits and preens and looks bored. He never shows emotion except at the end when he finds out Domino hooked up with El Mariachi and that El Mariachi killed his men. When he dies it isn’t as strong as it could have been because I was never invested in him as a villain. Bucho in “Desperado” is a much more interesting villain.

So ends the first of the “Mexico Trilogy” films. Now all I have is “Once Upon a Time in Mexico” to complete the reviews of all three. Like the space between this one and “Desperado” I’m going to wait though, before I do a look back on them all after they have all been reviewed. This is Rodriguez’s rocky stark, there is a lot here to like even if the problems in the film are obvious. It was his first time writing, directing and producing a film so I give him major credit for pulling that off. His sequel “Desperado” is better though.

Final Score: 7.8 / 10. Reason it isn’t solidly good (Score of 8) is because of how raw it is and all the scenes that clash with what really works. Also Moco as a villain really brings it down and Gallardo doesn’t quite have enough charisma to make the final scenes work.