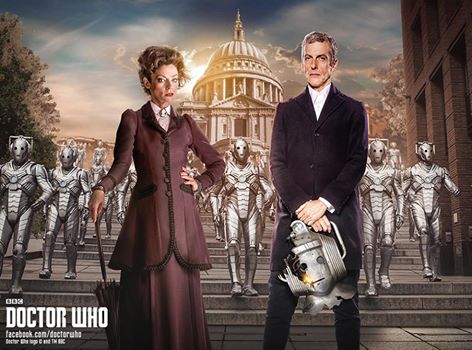 I’m just going to say it now, Michelle Gomez makes a great Missy, what I mean by that will be revealed in the assessment as it is nearly impossible to review this episode without giving spoilers as who Missy is, is the entire point of this episode really. The other relationships are side compared to her manipulations that she’s had set in motion since this series started.

This episode was written by Steven Moffat and directed by Rachel Talalay.

Clara calls Danny to confess all the things she’s lied about to confess her love for him, and he gets hit by a car. This kicks off the episode as Clara shows how far she is willing to go to get Danny back which leads the Doctor to use her and Danny’s psychic link to get them to the Nethersphere/Heaven. It is here they meet Missy and the story unfolds as they learn about 3Ws and their agenda in regards to the dead and some of what Missy has in store for her overall plan.

The Pros: Clara and Danny – These two are secondary in the episode and really the lesser plot at this point so I will cover them first. These two have trust issues, especially Clara. There is one point in the Nethersphere where she is talking to Danny through a Skype-like contraption and we see how Danny doesn’t know her that well (he isn’t able to answer the question about Clara about something only he knows about her…this is partially because of Clara’s lack of sharing. Their relationship is a bit one sided at times), and her willingness to create a Paradox to bring Danny back to life even if means destroying the TARDIS and Doctor. It’s a very River Song “Wedding of River Song” thing to do. I thought it was great as it revealed their flaws and failure to see the big picture going on around them (A Cybermen is being revealed as they talk and Clara isn’t aware of it until it’s too late).

The Nethersphere – The idea behind the place was cool and when we see it in action (Danny talking to a child he killed during war) and the dead who are revealed when the Dark Water goes away that they are Cybermen…the dead chose to give up their trauma and embraced becoming Cybermen because living was too hard is what the episode implies. All their minds are in a Gallifreyan device called the Matrix Data Slice, which than downloads the memories of the modified dead into the Cybermen giving Missy an amazing army. This is the first time we’ve seen the Cybermen used as tools of a higher power, and I love it since it captures the tragedy which is made all the more tragic as the dead chose their fate.

The Doctor – The Doctor is much like Clara and Danny and when Clara shows she’s willing to betray and destroy the Doctor to bring Danny back he still helps her. He doesn’t trust her anymore but he clearly still loves her. This speaks depths in regards to the question of the Doctor being a good man. He clearly is and Capaldi owns his scenes. This comes to the head in the end when Missy makes out with him making him completely vulnerable as he doesn’t like being touched and becomes worse when Missy reveals her identity and the Doctor realizes he helped create this situation. What it means fully remains to be seen as he is powerless to warn the people as the Cybermen invade. We’ll know more of their relationship in the next episode.

Missy / Mistress / The Master – Michelle Gomez is wonderful and I love the implications of her kissing the Doctor. The Master has always felt affection for the Doctor and this confirms it. The kiss shows that their relationship did have an unspoken other dimension and it adds a lot to both their characters (the Doctor and the Master). We also see the just how brilliant the Master is for creating the Nethersphere and tricking the dead into becoming slaves by forcing them to face the pain they experienced in life. She’s brilliant and deadly and I hope she survives this series. Much of the after scenes make more sense now, like her hope the solar flare would destroy Earth…now all that’s left is why she chose Clara and what Clara’s connection is to the Mistress. The wonderfully deadly Time Lady. Also I love how this episode sets up the potential for a female Doctor further down the line.

The Cons: Nethersphere Human Minions – These guys are just there and don’t really do much but give exposition. When Missy kills one of them it doesn’t really establish anything except her cruelty, which we already knew from the implication of the Cybermen being the dead who chose slavery.

Slow in Parts – The episode does lag in parts, for example the Clara and Danny conversation is the same thing stated again and again. “Prove you’re Danny.” “I love you.” This cycle just goes on and on, a few of the scenes of this could have been cut out. Danny doesn’t know Clara and Clara doesn’t trust…just like the Doctor.

Can’t wait to see where this episode goes as the Master Arc from Series 3 is one of my all time favorite arcs in the New Doctor Who Series and the Missy Arc could end up being just as good if it’s handled right. It all depends on the next episode as I usually don’t count the Christmas Specials in the arc, just like Davies Specials they are more often than not their own thing that focus more on character stories…with sometimes some pretty great baddies. Moffat, please don’t mess up Missy. I thought she might be the Master, now is the time to fully explore what her relationship to the Doctor and Clara is and what she has in plan with her invasion and the Matrix Data Slice. “Death in Heaven” could still save things by being good, but a lot is at stake now as the Cliffhanger has raised my expectations for how Missy is handled as she and the Doctor are far more interesting than the Clara and Danny arc going on currently.

Side Note: I had hoped Missy might be Romana or the Rani but the Mistress being the Master is still very good if predictable reveal in my book and shows so much more potential for future exploration of what it means to be a Time Lord and the relationships between Time Lords. “The Doctor’s Wife” had left this open as an option (Time Lords changing Gender via mention of The Corsair) but it’s great to finally see it happen!

I’ll do a score of the arc together before I talk about the series as a whole at the end of the next episode (as well as giving “Death in Heaven” it’s own score as a single episode). But this episode was a favorite.

Final Score: 9 / 10. Solidly great and setting up some great potential for the Mistress.