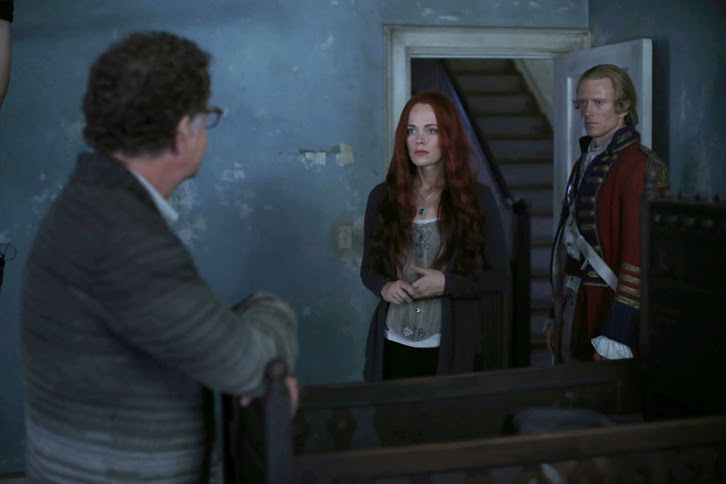 “Heartless” was an episode that has a Succubus as the enemy of the week, and keeping with this theme of attraction covers love, trust and how it can start or come back. I expected this episode to be worse but was very much surprised that I enjoyed it.

The episode was written by Albert Kim and directed by David Boyd.

The episode starts with War summoning a Succubus to our world who is than tasked with collecting souls to feed baby Moloch. As she does this the demon nearly kills Hawley which brings things to the forefront as Ichabod and Hawley must deal with their issues with one another and Katrina and Abbie must too, in order to stop the Succubus.

The Pros: The Succubus – The idea of the Succubus this time was handled really well. The creature is attracted to secret desire and preys off hidden feelings people share. It’s brilliant and leads to quite a few kills before it is finally taken down. Plus it takes all of Team Sleepy to do it as Nick and Ichabod kill it’s body and Abbie and Katrina kill it’s heart. The concept that it can only be killed when it’s heart is killed reminds me of a Lich and it is great seeing that concept used in television.

Abbie – Abbie is still the only one who gets it that Henry is dangerous and needs to be killed. Even after the Succubus kills multiple people…Katrina doesn’t get that that and the other killings in Sleepy Hollow are on Henry. Abbie is probably going to be the one to make that hard choice since Henry’s parents are very much like the Doctor in regards to the Master on the issue and still believe in the good in him. She is the one who finishes Katrina’s spell and delivers Katrina’s message to Ichabod when Katrina decides to go and kill Moloch while he still vulnerable.

Katrina and Ichabod – I’m putting them together because even after this there blindspot is still Henry. The main thing that sets them apart is Ichabod starts to sympathize with Nick when he finds out Nick likes Abbie and also how much work he needs to do with Katrina when the Succubus points out his love has soured. Katrina is also learning to trust Abbie and we see they both love reality television. The episode ends with Ichabod trusting Katrina to go undercover to defeat Moloch since she is a good spy. This is contrasted by the fact that the necklace that lets her see Abraham makes her see Moloch as a human baby and her initial reaction is sympathy. Things move forward on all fronts but there are trials ahead.

Horseman of War / Henry Parish – Has a small scene at the end but we mostly see him looking at baby Moloch with joy and feeding him the souls that the Succubus brings. He also is kind to his mother once he knows she is wearing the necklace as her caring for Moloch seems to have been part of his plans.

The Cons: Nick Hawley – I know we’re supposed to like this guy but I feel the same way towards him as Ichabod did. He’s annoying and selfish and I hate how they are trying to hook him up with Abbie, especially given the history he already has with Jenny. It looks like cheap drama to create a love triangle and Nick like Abbie just doesn’t feel believable. She is everything he’s not in being a law officer and on the grid (and respectful, kind, etc.). He is none of those things. I do hope this character dies this season. Someone else can be the go to on the Supernatural stuff.

This episode was pretty good in it’s exploration of love and trust. From Katrina and Ichabod learning to communicate, to Katrina recognizing she needs to act and that letting War make all the moves is not going to lead to anything good. I am curious where this will all lead, especially in regards to Baby Moloch and the apocalypse. Suffice to say, this episode was fun.