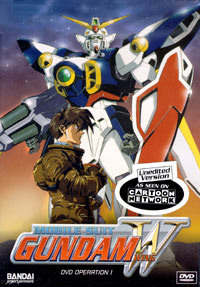 It looks like I’ll be returning to the “Gundam” series sooner than expected. After talking about “Gundam Wing” with one of my close friends, and the amount of times it has been recommended to me has lead me to start reviewing episodes and the series. “Mobile Suit Gundam” is one of my favorite series and dealt so intelligently with arcs, consequences of war and politics, from the sound of it “Gundam Wing” does it better.

“Gundam Wing” is in a different universe but still follows the basic design with Gundams and some of the characters are have parallels to the prime universe. The series ran for 49 episodes and ended with the OVA “Endless Waltz” like “Zeta Gundam” and “Char’s Counterattack” those reviews will come later. The series was directed by Masashi Ikeda and written by Katsuyuki Sumizawa.

I am looking forward to getting to these reviews after seeing the pilot episode, which I’ll talk more about in a review that will be coming soon. Suffice to say it isn’t as clear gut as “Mobile Suit Gundam” was as “Gundam Wing” has many more factions and our protagonists are not good people…they are broken characters and weapons of the rebel colonies against the United Earth Sphere Alliance (UESA). The factions and politics make it almost “Game of Thrones”esque and the fact that there are very few noble characters makes the faction conflicts interesting. I’ll get into more of what I mean when I post my review of the pilot. Until then, it’s great being back reviewing anime.