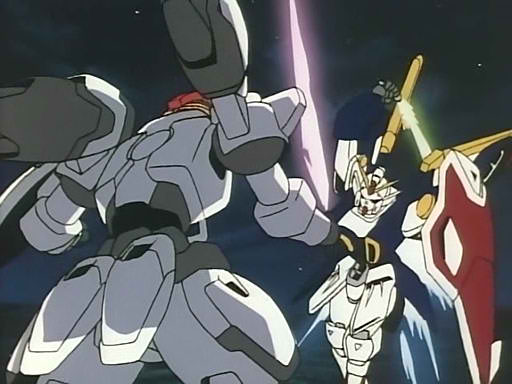 “Gundam Wing” has a lot more complexity in factions and characters than the original “Mobile Suit Gundam,” and we see some of this of the factions arising within OZ in regards to the different mentalities of combat and what entails victory. This made the episode intriguing, as well as us experiencing a loss very early on…We are only on Episode 10 after all.

“Heero, Distracted by Defeat,” was directed by Nana Harada, Shinichi Sakuma and Hitoshi Waraya and written by Katsuhiko Chiba.

The episode begins with a meeting of the OZ leaders (Lady Une, Noin, Treize and Zechs), from here Treize meets them all individually and puts Lady Une in charge of dealing with the rebels and the transfer of the Taurus Mobile Suits to a secure location and dividing the Colony Gundams by having a decoy band traveling by land while the read transport travels by air. From here the story unfolds as the Gundams fall into the trap.

The Pros: Zechs – Zechs shows once again why he is one of my favorite characters in this episode as he rejects his birth name and being named a Count choosing only to remain a soldier, knowing that he will have to do much more things that will make him unworthy to lead if there is ever to be peace. It is fascinating and he lets Heavyarms take Heero to safety after Heero sacrifices his Gundam to protect the colonies. He also matches Heero in the fight as he fights in Tallgeese against Gundam Wing.

Noin – Resists Lady Une throughout the episode in small ways, such as not letting her talk to Treize and shutting her down with Treize’s words as Treize disproves of her brutal and harsh methods. She also is supportive of Zechs and what he is going through during the mission.

Treize – Treize speaks Zechs true name and wants him to lead, but respects Zechs’s choice not to lead. He also puts Lady Une in charge, though why remains to be seen as she is brutal and gets the job done, but everytime it comes at a cost. The reasons he wants people to hate OZ right now has yet to be explained.

The Gundam Pilots – The Gundam pilots lose this one and Wufei doesn’t join the battle, which costs them victory. He feels unworthy after losing to Treize and the only reason they weren’t annihilated was because of Heero’s sacrifice.

Dr J. – Reveals he is behind the fight against OZ and surrenders. Whether he is telling the truth or not remains to be seen, but it shows he puts the Colonies first, and it was great seeing him again.

Okay/Con: Lady Une – Is jealous and small thinking, which is a shame because her methods of blackmailing the Colonies could be critiqued for other reasons rather than her character. She was called out afterall. Right now there isn’t anything to like about this character now, she isn’t even good to her allies. She’s a bit crazy at this point as she was ready to destroy Colonies to get them to surrender.

This episode was really good, but not a favorite. Treize and Lady Une are still vague in their motivations and the Gundam Pilots didn’t get enough exploration in this one. They have brotherhood but they didn’t get an individual chance to shine this episode. These issues brought the episode down.