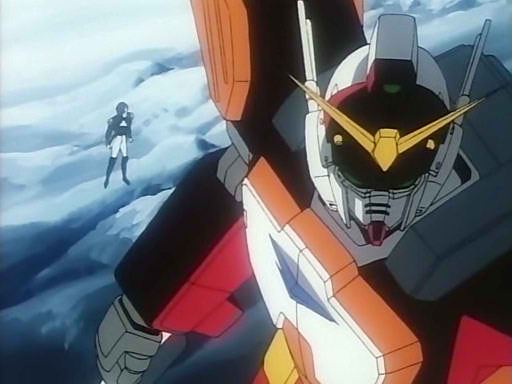 You can’t trust the Romafeller Organization, though that was true after last episode. At this point they have adopted the Zion role that Zion played in “Mobile Suit Gundam.” They are royalist fascists who care nothing for honor or ability which puts them at a stark contrast to Noin and Zechs who they turn against this episode.

“To the Battleground Antarctica” was directed by Tsukasa Dokite, Shinichi Sakuma and Hitoshi Waraya and written by Toshifumi Kawase.

The episode picks up where the last one left off with Heero leaving the home of the last Noventa and being picked up by Noin who tells them that Zechs wants to meet them and promises them safe passage. Around this time Relena learns that Heero accidentally killed the Noventa leader during OZ’s coup and seeks out the wife of the leader who sends her a letter to give to Heero as she was seeking Heero too. Inspector Acht attacks them in transit and Trowa and Heero are forced to make a choice of either letting Noin die to remain undiscovered to to do the right thing and reveal the Gundams are near Zechs.

The Pros: Noin – She fights for her soldiers and is loyal to Zechs and his goals as well as very much being her own person. She holds the Gundam pilots responsible but also respects them and understands them as she is a pilot herself though she hasn’t been through the same level of trauma they have.

Zechs – He wants to meet the pilots even though it puts him at risk. My respect for this character continues to increase.

Trowa – Trowa is the focus as he decides against his judgement to save Noin and the soldier she is protecting from Romafeller forces. We see that he has regret though as we have no idea of Inspector Acht was able to get his message that the Gunams were in Antarctica out in time. Suffice to say he feels guilt though, which is what he’s been living with this entire time, much like Heero. Those two are similar.

Okay: Relena – She’s researching and being active but we aren’t seeing her play politics yet. After last episode this one felt very small in comparison.

The Cons: Inspector Acht – Wants to defeat the Gundams to show he is the best but panics when Heavyarms appears. This character was just a waste, and he was supposed to be a person of power too.

This episode has a lot of setups. We see the guilt the pilots live with and that they will do the right thing even when they put themselves and the colonies at risk, we see that Zechs is more complicated than he appears to be, as is Noin and that the war is slowly breaking everyone down.