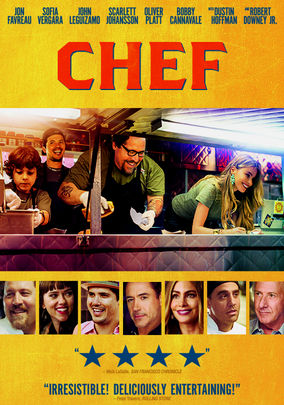 Besides “Iron Man” this is probably my favorite film so far that Jon Favreau has directed. He also stars as the main character this and wrote the film, which gives me even more respect for the guy. This film clearly came from a place of passion and love of for the creation of good food. This film also does a great job of showing how social media shapes how films can be presented too, but I’ll get into more of the details of what I mean in the  actual assessment. One final note here as well, as someone who lives in Oregon, I have a great passion for food trucks and this movie does a wonderful job showing what they do and can do.

“Chef” was directed, written and produced by Jon Favreau, with the other producers being Karen Gilchrist and Sergei Bespalov.

The premise of the story involves Chef Carl Casper (Jon Favraeu) losing it after a critic Ramsey (Oliver Platt) gives him a bad review after his boss Riva (Dustin Hoffman) pressures him to keep the menu safe, rather than to experiment. This leads to him quitting when his boss refuses to let him cook anything beyond traditional menu leading him to seek out help from his ex-wife Inez (Sofia Vergara) and returns him to the dream of owning a food truck and having full control over what he gets to cook, over the course of this he finally builds a relationship with his son.

The Pros: The Cinematography – Like I said at the beginning, there is a beautiful presentation and love of the food that is cooked. Whether it is a simple grilled cheese sandwich, an Italian dish or a rich meat dish…all the food is presented beautifully on screen. Kramer Morgenthau did a great job with it all.

The Soundtrack – I really enjoyed the soundtrack! It has a lot of jazz of all kinds, Cuban music and drums that give it a very active feel, which fits as it doesn’t show being a Chef as easy. It shows just how difficult the work is and the pressure of people waiting as their dish is completed. Lyle Workman did a fantastic job!

The Characters – The strongest part of this film are the characters. No one is really a bad person in it and everyone is given exploration, even the critic. This is something that you usually wouldn’t see in a movie that follows these beats as it would usually end with the critic or antagonist being shamed, this film doesn’t though because it gives the critic as much respect as Carl.

Molly – Scarlett Johansson is great in this role! She is the lover of Carl but in the end mostly more of a friend. We never see her in the romantic role except when Carl makes them dinner once and she is there to help kick him back into gear when he depressed and explodes at the critic who gave him a bad review.

Riva – Review is the owner of the business in which Carl is the Chef for. He’s not a bad person, but he’s afraid of change and that creates tension with Carl who is always experimenting. Dustin Hoffman adds a lot to a role that could have been just a cruel man afraid of change, instead we have a man who cares about his restaurant and the customers and that is the reason he fears change.

Marvin – Marvin is the ex-husband of Inez who has a cheating problem (it implies he has a lot of bastards probably) but is also a nervous wreck afraid of dirt and everything else. He respects Carl though and funds his Food Truck idea. He has a small role but his character is interesting as he is like a man trying to learn how to feel. Robert Downey jr. of course does an amazing job!

Ramsey – This is another role that could have just been antagonistic, but we soon learn that their drama arose out of Carl’s lack of freedom in his job and lack of tech. savyness when he replies on Twitter and thinks that it is an email. They resolve things at the end though and Ramsey mentions how he was backing him from the beginning but wasn’t going to lie about the terrible experience at the restaurant, Carl deserved honesty…and he’s right. I like when critics are given constructive roles like this and aren’t just demonized. Though I am biased, being a reviewer myself. Oliver Platt is great.

Inez – I haven’t seen Sofia Vergara in anything outside of “Modern Family” but I hope that I can see her in more after this. She is really good as the Single Mother who is a professional who is still friends with her past relationships. She is the most mature character in the film and the one who most knows herself and her dreams. For Carl it is a discovery.

Martin – It’s been a while since I’ve seen John Leguizamo in anything, but he is great in this! He is both Carl’s co-worker and friend and when he hears the passion about the food truck Carl has, he goes to join him and together they are the main team that travels the United States together. He is a good guy and is more relaxed than Carl, giving them a nice contrast. He also acts as an older brother to Carl’s son too.

Carl – Jon Favreau really has a lot of range and is talented for pulling off everything so well with this production. You can see how much he cares about food and the characters as there aren’t any one dimensional antagonists. Everyone has reasons that are shown and not told and Carl represents that really well. His character starts out as a man unhappy in his job and disconnected from those around him to one who is really connected by the end has has built his relationships and with it his self respect. It really is a great movie to see.

The Message – The main message is that you have to respect yourself first and foremost and that is how others will respect you. Ramsey the critic echoes this at the end and points out that there was no love in the meal he at Riva’s restaurant, while here he can taste how good it is and now wants to back it. It is powerful and shows what self respect and perseverance can accomplish.

Okay: The Ending – The ending was a little too happy and felt a little rushed. I wouldn’t have had Inez and Carl get back together, or if they had too I would have shown them actually communicate more and have it be a process. We never see that process so it’s almost more of a wish fulfillment for there son when we never get to know why the relationship ended in the first place or what changed for them to get back together again.

I would highly recommend this movie. If you have a love of food or complex characters, you will probably enjoy this film. The fact that my only real issue with it is that it is too happy is saying something. Everything else is spot on and characters change and grow. The one thing that could have made it perfect beyond the ending would have been to give us more time with characters and their relationships as those moments were so strong as it was, we just needed more of them to complete a perfect picture. Regardless, this is a favorite film and I can’t wait to see what project Jon Favreau does next.