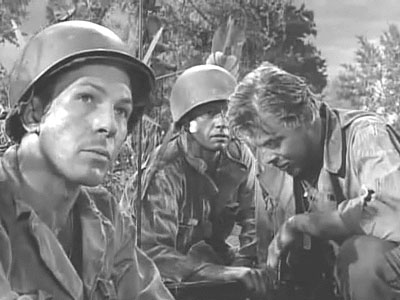 This episode has officially got me interested in watching the rest of “The Twilight Zone.” I really enjoy shows that make me think…it’s one reason I love the “Star Treks,” enjoyed the episode of “Black Mirror” I reviewed and tend to enjoy films like “Inception.” This was a good episode to kick off Leonard Nimoy week too, as he plays a small but key role in this episode of “The Twilight Zone.” This was one of his earliest works as Nimoy starred in this episode in 1961.

“A Quality of Mercy,” was directed by Buzz Kulik and written by Rod Serling and based off a story by Sam Rolfe.

The premise begins at the end of World War 2 where a bunch of American soldiers have some sick Japanese troops trapped in a cave and have had them trapped their for a while. A lieutenant arrives on the scene named Katell who wants to wipe them out as to him every Japanese is an enemy regardless of circumstances. The men protest but in the end follow orders. As they prepare for the attack though Katell wakes up in another man’s body in 1942, A Japanese lieutenant named Yamuri who is being ordered by his commander to wipe out the American’s trapped in the same cave.

The Pros: The Premise – The idea of body swapping to see things from another point of view is cliche but a really awesome idea that is done really well here. They put Dean Stockwell in make-up to look Japanese but it works in this instance because he isn’t being used to bash Japanese, he is there so he can reveal that they are the same people stuck in a horrible situation in a circumstance in which mercy is what is needed and not seeing the other side as purely just “The enemy.”

The Cinematography – The cinematography is beautiful in this episode and presents how tired the soldiers are in the wars being fought as well as showing closeness in relationship in how characters are placed in different scenes. Using the broken binoculars to show past and present was a brilliant use of cinematography too.

The Soldiers – The soldiers in both situations are presented as complex people which lends strength to the story. Nimoy’s character is a cool headed communications officer who calls out Katell on his bloodlust while the others are calling him out for being so green and point out they’ve lost 3 commanders already because they came in so arrogant and were easy for the Japanese to pick off. They all have great chemistry together and their Sargent played by Albert Salmi is stand-up guy. Dale Fujiwaka did a great job playing the Japanese captain who sympathized with the alienate on not killing the Americans and was supportive while their superior was driven by the need to kill.

Dean Rockwell – Dean Rockwell does a great job in acting in this! He plays the overconfident man who hates the Japanese and when he finds himself as a Japanese man he feels vulnerable and scared and when he realizes that Americans are going to be killed using the philosophy he used to justify killing the Japanese, he panics and realizes that he hopes he never kills. This episode really teaches the value of human life.

The Message – The message in this is powerful. It shows how the soldiers in wars are often just fighting to survive or due to orders and that it is important to stand up to protect the weak, even if they seen as the enemy and that mercy is important, for without it we lose our humanity. It also showed how soldiers are parts but often times it’s bigger things like the Bomb that end the war implying an even bigger question of ethics.

Okay: Sgt. Yamazaki – I wish we could have got this guys motivations more, he wasn’t green like the lieutenant so I wanted to know why he was so driven to kill the defenseless. He was the only person this episode who could have been handled better.

This was a great way to kick of Leonard Nimoy Week! His character is small in this, which makes sense as this was when he was just getting started as an actor, but his cool demeanor is a nice contrast to the trigger happy lieutenant and his compatriots who joke around a lot more. The episode was powerful too as the point it made is one that is timeless and reminds us to empathize with those who don’t have power and the importance of seeing things from other points of view, as well as how important mercy is, especially when there is the option to kill.