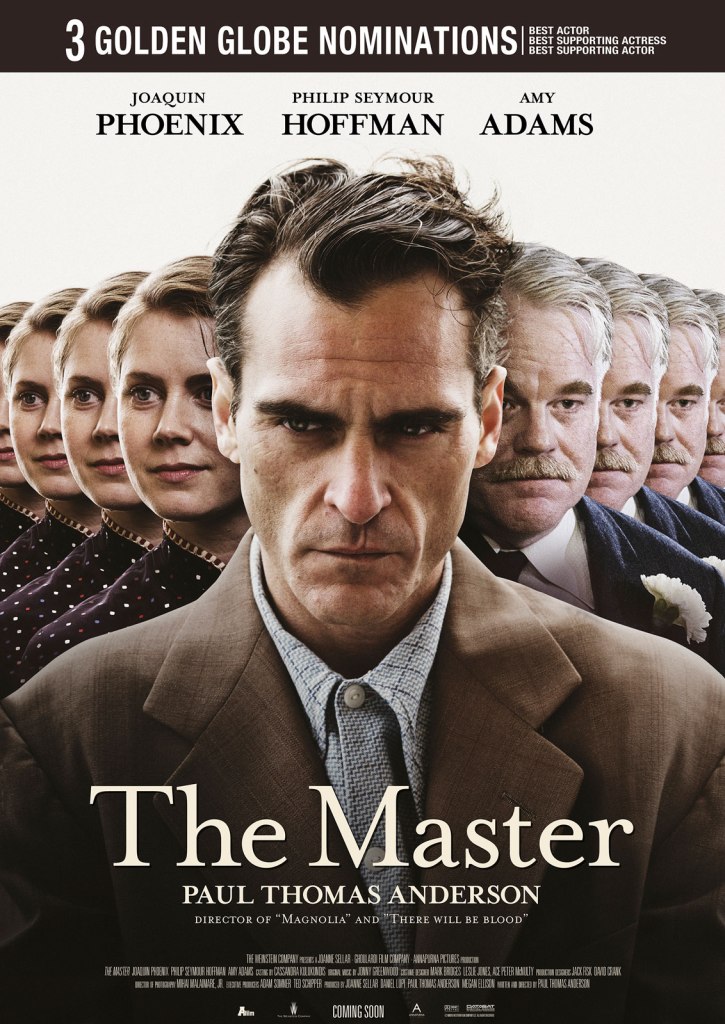 This film was a trip, but I would not expect any less from Paul Thomas Anderson. He is one of those writers and directors who have really good quality films but none of them are really favorites. I think a big reason for this is the actors do a great job but the characters they inhabit are so horrible it is hard to have sympathy for the plights they face. This is very true of this film as well where we follow a Cult Leader and Drunk as the primary characters of the narrative.

“The Master,” was directed, written and co-produced by Paul Thomas Anderson with the other producers being JoAnne Seller, Daniel Lupi and Megan Ellison.

The story follows Freddie Quell (Joaquin Phoenix) who is a drunk drifter who makes special liquor with paint thinner as he alienates every environment after World War 2 ends. He starts out as a photographer, loses the job after he fights a client, a laborer until he accidentally poisons an old man and ends up hopping on the boat that the Cult Leader Lancaster Dodd (Philip Seymour Hoffman) is on. From here is taken in by “The Cause” as he tries to be a part of it while dealing with his rebellion against any form of authority over him as the drama of the Cult unfolds through the story.

The Pros: The Soundtrack – The soundtrack is beautiful. There are elements of 50’s Jazz and the instrumentals are great as well. It really captures the desolation of the characters too and how they all feel alone.  Jonny Greenwood did a good job.

The Cinematography – The movie was filmed in 70mm which ended up giving it some great wide shots and making the film feel large, even if most of the seasons were very personal scenes. It allowed glimpses into the characters’ minds. Mihai Malaimare jr. did great work.

The Themes – The big themes of it are that power corrupts (The Master Lancaster is always using people to his own end and ego), humans have a need for leaders and are lost without them (the drifter Freddie never changes and never finds purpose except when he was taking photos with “The Cause”), and to not believe those who claim things that cannot be proven (The most reasonable characters are those that are yelled at by Lancaster or beaten up by Freddie for questioning Lancaster Dodd).

The Message – There are few messages that the themes explored. The human need for authority and how those in authority, especially religious authority often use it to their own ends and that authority unchecked is dangerous. Within this is the theme that authority should be questioned, especially when it makes claims it cannot prove. There is also the importance of direction as Freddie has none and never finds peace which seems to be something he’s trying to find throughout the film.

The Actors – Amy Adams does a great job playing the manipulative “girl next door” type character, Hoffman was masterful as the demagogue who had a calm confidence that was lost whenever he was questioned and Phoenix played the drifter really well as he contorted his body and murmured every line like he wasn’t ever fully present in anything. These performances were great, but I couldn’t stand the characters.

The Cons: The Characters – The Master and his family are only out for themselves and believe they are saving the world and are therefore entitled to others wealth. You see this constantly in how they turn on those who question their claims and try to shout over them rather than answering the questions. They claim science without actually using it. Freddie isn’t any better as he is always picking fights, poisoning himself and others and never committing to anything. He is the drifter in a nutshell in the worst way as he never grows and has no arc. He like the Master is the same person he was when they met. Because I couldn’t like any of the characters it’s a major con for me as characters are what keep me interested in the story and caring about what happens.

Paul Thomas Anderson is a director whose movies may grow on me with time. For now though, the unlikability of his characters is a major con that keeps his films I have watched (including this one) from being favorites. It was good, it was well made,had relevant and great themes that were shown and not told, well filmed and acted…but if I’m not invested in the characters than I’m not invested enough in the plot and what happens to the characters. This is a major problem for me and what made the film good and not great.