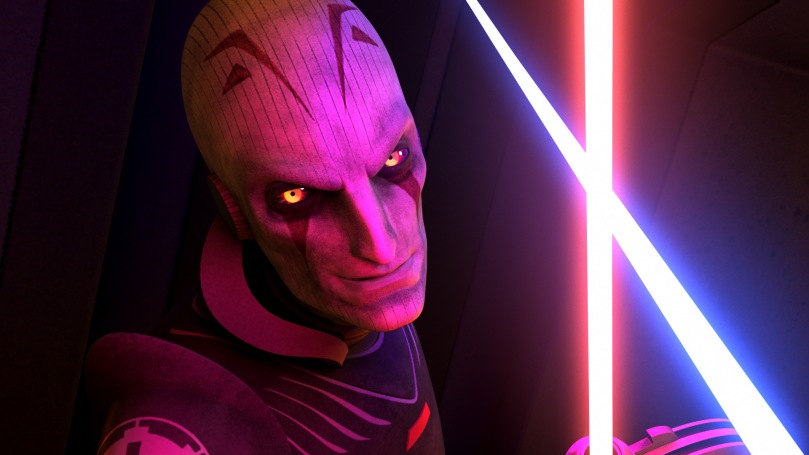 This episode establishes the new threat of The Inquisitor really well as well as implying that Order 66 and the aftermath has been very successful. The only folks around now are untrained Jedi like Kanan who were never able to finish their training and now are the best hope for people like Ezra who are force sensitive but have no experience or discipline. It is a great stakes episode.

The episode was directed by Steward Lee and written by Henry Gilroy.

The story begins with Kanan training Ezra but it going wrong and Kanan realizing he doesn’t know enough about being a Jedi himself.  After they receive information that Jedi Master Luminara is captured by the Empire they decide to mount a rescue for her. This leads to Ezra feeling like Kanan doesn’t want him and the things soon become complicated as their information about the prison is outdated and they are forced to improvise.

The Pros: The Infiltration – Finding a way in to the base is one with high stakes all the way through. They have to drop in a shuttle, go in least guarded door, make it look like nothing happened and get to Luminara before the alarms are sounded. Nothing goes as planned and when Ezra and Kanaan reach the location they find Luminara dead and that she was a trap laid by The Inquisitor to capture and kill them.

Kanan – Kanan is very human in this. We see his insecurities in this and realize he was never fully trained but we also see that he uses the force like Ezra. They are most in contact with it when protecting others. In this case Kanan saves Ezra and after they rescue the crew using the force before he begins training Ezra without being insecure.

Ezra – Ezra is arrogant per usual but has a good head. He has no desire to join the dark side and is very attached to his new family. We see him get schooled by the Inquisitor but at least providing a distracting while Kanan fights. He also is key in their escape from the base and says he wants Kanan as a Master.

Sabine and Zeb – Sabine helps them escape the turbo lift and is key in the escape. Zeb trolls Ezra at the beginning of the episode but comes around at the end is key with Sabine. There is also a moment where they make fun of Kanan in front of Kanan about how the plan keeps getting worse and that he never makes good plans.

Hera – Uses her skills as a pilot to use the fact that Ray like beasts want to mate with the ship to be her Calvary against the Imperial forces attempting to stop the Crew from escaping. She does a good job in this and is once again the solid base for all of them.

The Inquisitor – Jason Isaacs is wonderful in this role! This guy is confident, deadly and from what we can gather has killed quite a few Jedi already. He’s the kind of guy you don’t want to mess with and he is so powerful Kanan and Ezra get their buts handed to them and the crew is forced to run away from him. He’s just that dangerous that victory means escaping him not defeating him. Can’t wait to see what they do with this guy. He has a great design with Sith tattoos and the grey skin of his species, the Pau’an.

I really enjoyed this episode. It establishes the threat of The Inquisitor and The Empire and we see just how outmatched our heroes are, considering their only victory is in surviving not stopping or preventing anything. The Jedi religion is pretty much dead at this point and you really feel it. The Jedi are survivors (those few that are left) and are hunted, there is no safety when the Empire controls all.