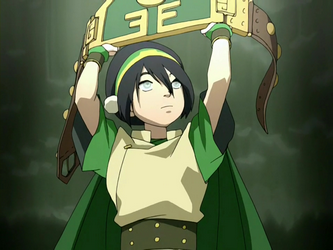 “The Blind Bandit” is our introduction to Toph and also shows us what Pro-Bending was like during Aang’s era. It is a great episode of world and character building and we see characters make choices that change them as well as how sometimes the greatest tyrants can be those closest to us, like our parents.

The story involves Aang’s arrival Gaoling, the town that is home of the wealthy Beifong family. It is here he seeks an Earthbending Master, first at Master Yu’s academy where he soon learns advancement is about money which leads to him looking elsewhere. This leads him to an Earth Rumble VI where he witnesses the Pro-Bending of that era and is drawn to the Blind Bandit, who is the laughing girl he saw in his vision in the swamp. From here he tries to convince her to be his Earthbending Master and goes up against her not wanting to do it and her parent’s wishes.

The Pros: Earth Rumble VI – The Earth Rumble VI is done in the style of WWE type match except the damage is real as it is a bending tournament. It is fantastic as each of the fighters has a theme from Fire Nation Pride, to really big and looks like a hippo to a mask. It is fun to watch too especially when The Blind Bandit Toph schools them all.

Katara – Katara waterbends the bullies who were mean to Aang to find out about the tournament and keeps tabs on them so they don’t treat others like crap either. In this she is the one acting with awareness whee Aang is completely focused on recruiting Toph.

Sokka – Sokka loves Pro-Bending we discover and is a big fan of the The Boulder. This doesn’t blind him to the Boulder when the Boulder kidnaps Aang and Toph but it was cool to see Sokka fanboy over someone.

Aang – Aang is completely focused on Toph and even enters the match to face her to try and convince her and beats her with Airbending as well as receiving the name Twinkle toes from her as he is so light on his feet she has trouble sensing him and therefore is not able to fight him. She eventually comes around as Aang offers adventure and we see him happy as he fully appreciates and respects her abilities as a bender.

The Beifong Family – Toph’s parents are really controlling. When she shows she can take care of herself they take it as them being too lenient and decide to put her under guard. Their not listening to her is what convinces her to run away which leads to them paying Master Yu and the Pro-Bending owner to bring her back.

The Boulder – The Boulder speaks his name in everything he does. He is hilarious and was fun to see beating others and finally beat by Toph. I hope this character appears again, if only for the comedy.

Toph – Toph is smart, rebellious and witty. We see her shutdown men three times her size in combat and words with her only hold up being her fear of her parents. Saving the Aang changes this though and in the end she goes her own way, leaving her family behind. She has always wanted freedom and adventure and with Team Avatar she finds it.

Toph is one of my favorite characters on this show as she is a complicated character. We see this in her introduction to Team Avatar and their conflict and her conflict with her family. In the end she makes a choice though and from there becomes an important member of the Team and Aang’s Earthbending Master.