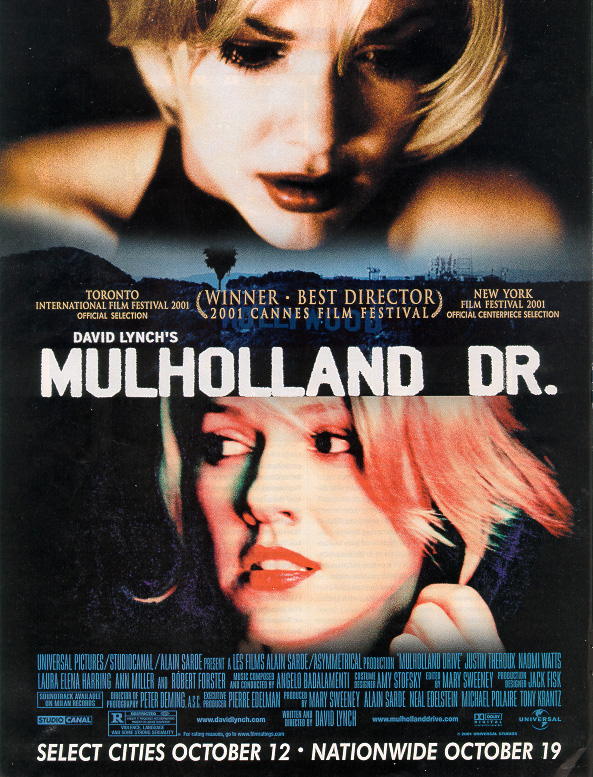 “Mulholland Drive” was amazing! I tend to be a fan of films that play with the nature of reality and the fact that this happens in the context of a mystery noir where we never quite know which reality is real makes for a whole host of interpretations, all of which have merit and lend strength to the story. It also has the dark that makes David Lynch so fun and has some fantastic acting by the leading actresses.

The film was directed and written by David Lynch and produced by Neal Edelstein, Tony Krantz, Michael Polaire, Alain Sarde and Mary Sweeney.

Before the story begins we see a jitterbug competition before we cross onto a silent road where a woman (Laura Harring) is being to Mulholland Drive where is about to be shot. After some teens crash into the car she has no memory and is taken in by Betty (Naomi Watts) an aspiring actress as together they try to figure out who she was. Things are not as they appear to be as we see mysterious forces pressuring a director to a cast a film and changes in reality as the film progresses.

The Pros: The Tone – The tone is dark and mysterious and kicks off with a man being haunted by an unseen force behind a building and this force continues in the words of “Silencio” and a man with a tiny head who controls Hollywood from a stage.

The Cinematography – The cinematography is dark and haunting as well as dreamlike, playing into the themes of dreams, many realities and delusions. Peter Deming did a fantastic job on that.

The Soundtrack – The soundtrack compliments the situations really well with some great Spanish Capella, somber instrumentals and of course the jazz feel throughout. Angelo Badalamenti gave great variety to a score that complimented the story really well.

The Characters – The characters are complicated, especially the director, “Rita” and Betty who each have a few different versions of themselves that we see over the course of the film.

The Hitman – A young Mark Pellegrino plays the hitman who Diane pays to kill Camilla and who in the first reality takes out a young actress who was Rita’s roommate. We see him much more active in the first timeline as he messes up an operation to get a black book of info. and ends up having to kill a whole bunch of other people to hide it up. He is good at playing the punk who is out of league and keeps getting into worse situations.

Rita and Camilla – Harring does a great job as the possible former prostitute turned heroine in Rita who is figuring out the world around her and discovers the truth and disappears in the process after finding love with Betty, and Camilla the arrogant premodana who manipulates others for her own ego and amusement. Harring does the two different roles so well.

Betty and Diane – I can see why Naomi Watts won an award for this role. We see her playing roles within roles as she plays characters in scenes as she is applying for parts in Hollywood and we see her as the kind, caring and curious Betty as well as the unstable, angry and broken Diane. Betty’s arc comes full circle at Silencio and Diane’s ends when Silencio is said too as Betty finds peace in her love with Rita and Diane goes insane from a whole bunch of things and takes her own life.

The Interpretations – There are quite a few ways to see what the film is and I’m going to share the interpretations that make the most sense to me.

The Dream – The story is all a dream and nightmare dreamed up by Betty and she is still asleep as all her fears and hopes of having a new life in Hollywood play before her in her mind. We never know if she wakes up or is just jumping between dreams…given the dream jitterbug dream sequence at the beginning and the nightmarish vision at the end with the same people at the end of the Jitterbug opening give credence to this interpretation.

Delusion – The character of Betty is a delusion by the character of Diane who has a crush on Camilla who is getting married to the director. Making Camilla the damsel in distress in her mind was the only way to cope with her situation that eventually lead to her being a prostitute on the streets ready to kill her former friend and lover who had found happiness with another. This is one of the darker ones and the counter to it is the Key and “Silencio” which seem to hint at other realities.

Alternate Realities – There is a supernatural element that pervades the story, from the man behind the building to any seen in Hollywood where we see unhinged characters with power and no people skills who are capable of destroying livelihood. This element is true through both realities making me think that Diane and Camilla are one reality that is true and that the Rita and Betty romance also happened and is true as well but we leave that reality when Rita opens the box to the reality where Camilla and Diane are. I liked this one the best as the mystery is still there and it doesn’t forget the strange forces we’ve seen at work from the beginning of the production.

If you like David Lynch or Noirs, chances are you will really enjoy this film. It is a favorite and I liked it more than “Eraserhead” which was a really good film. This film was great at exploring the mind and the themes of illusion, dreams and realities are hard to pull off, but Lynch does so seamlessly. The actresses are amazing too and I really like Rita’s and Betty’s romance as it had so much richness to it as they grew together. This contrasted by the second reality gave the first one strength and gave room for interpretations, which I liked. I tend to like films with clearer answers, but this one was great in how open it was and how it truly let the viewer decide what happened.