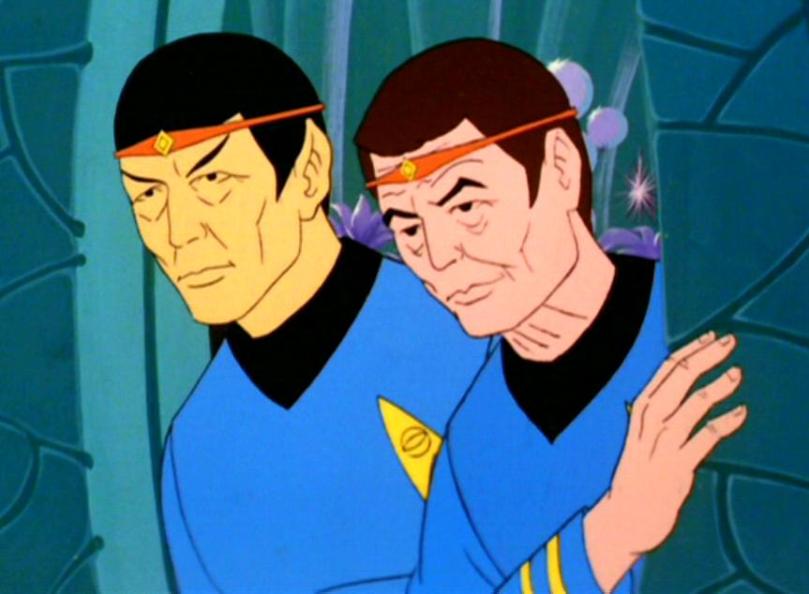 “The Lorelei Signal” is an episode that would have had a lot more problems had Rodenberry been the writer. Given “A Wolf in the Fold” had a woman posses Kirk because she wanted to be a captain but couldn’t through the sexist Federation (So glad this didn’t carry over to “TNG” for Starfleet Rules) and his general approach on that issue I’m glad that he wasn’t writing the Siren like Taureans who actually get some exploration and are more than just Vampires who suck the energy out of men. There was so much that could have gone wrong in this episode, but instead we got a fun adventure thankfully.

The episode was directed by Hal Sutherland and written by Margaret Armen.

The story involves the Enterprise being pulled to the Taurean world by a strange musical signal. When Spock, Kirk and McCoy and Carver beam down they are taken hostage and are used as an energy conduit for the immortal species of women. From here they must plot their escape while Uhura takes control of the ship to go about figuring out to rescue them.

The Pros: Spock – Spock is the one who is able to figure out that they are drawn to men to suck away their energy and gets the information to Uhura before passing out, warning them to bring an all women away team. He is the one analyzing every situation they are in and the least attached even though even he is drawn in and hears Vulcan Wedding Drums from their singing.

Uhura – Uhura suspects something is up from the beginning and gets them away from the planet the moment she sees that the crew is getting worse. She also negotiates a treaty with the Taureans rather than killing them showing just how much of a Starfleet Officer she is and worthy of the Captain’s Chair.

The Taureans Motivation  and Treaty – The new technology they created led to their men dying off so the only way to live was to bring more over to take their energy. They find another way when the crew learns that they can mate with other species so they leave the planet to make a life elsewhere and are glad to give up Immortality and it’s cost.

The Cons: Siren Trope – They pull the men there and hypnotize them because of their beauty. This trope is so overdone and I hate how it defines women so narrowly and gets rid of diversity within a population. This was my issue with the Taurean concept as a species and where I could have seen this being one big “Taming of the Shrew” type episode.

This episode was enjoyable though it was not able to approach the Female Species only exist to “draw men in due to looks and sex and is only using the men.” This thought process is a huge reason that sexist societies use to justify keeping women out of power, since they are only seen as weak with their bodies and minds as their only ways to get any sort of control and are looked down on that as those with power use these poor reasons to justify the sexist status quos.