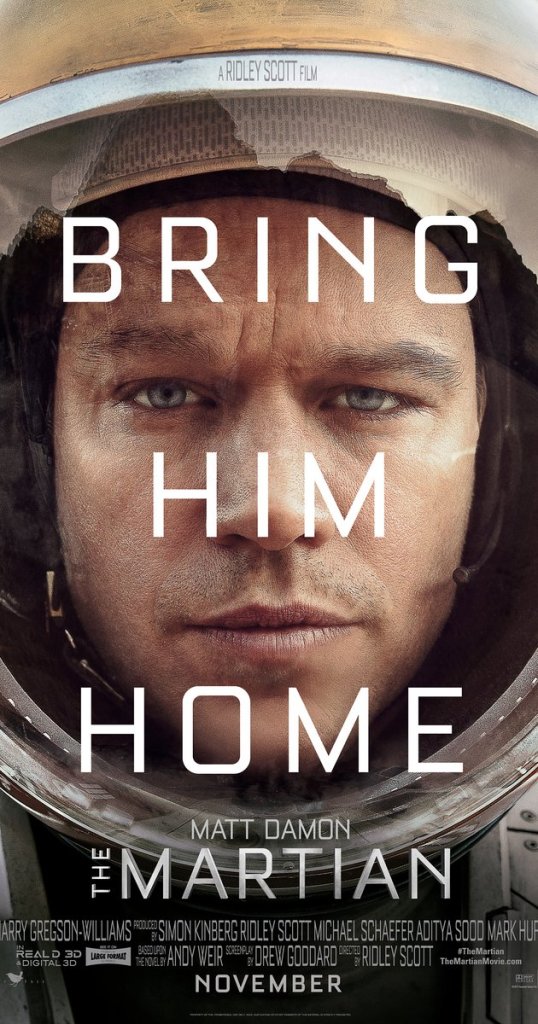 “The Martian” is a film that truly captures the terror and wonder of space travel as well as giving us very real and complex characters who are worth rooting for. Ridley Scott has done it again (though I haven’t watched some of his more recent films so I understand there was a drop in quality at one point). Suffice to say though, I really hope this film will kick in the love of exploring space again in the populace.

The film was directed by Ridley Scott who was also one of the producers, written by Drew Goddard and produced by Michael Schaefer, Aditya Sood, Mark Huffam and Simon Kinberg. It is also based on the book of the same name (that I want to read now) by Andy Weir.

The film involves astronaut Mark Watney (Matt Damon) accidentally being left behind on the first mission to Mars called the Ares III mission and him having to survive and make contact with NASA in order to mount a rescue before he dies.

The Pros: The Cinematography – Dariusz Wolski captures beautiful scenes in this that show the desolation and danger of space but also the beauty and wonder of space and Mars.

The Soundtrack – Harry Gregson-Williams gives the soundtrack a very “2001: Space Odyssey” feel giving us both classic instruments, synth and even a mixture of 70’s and 80’s music intermixed throughout the score.

The Writing – Drew Goddard did a good job on this script! It all show rather than tell and the times where it gets you information you need (how Watney sciences) it is done a comedic or interesting way that drives the action forward. This alone puts it above “Interstellar.” I really want to read the novel after this.

The Characters – The characters are compelling with only two characters not really getting too much exploration but still have arcs! This is a show where even the minor characters make choices that have consequences.

Teddy Sanders – Jeff Daniels does an amazing job as the Director of NASA who has to make difficult choices throughout the course of the film as Mark surviving makes things more complex as far as getting funding and at one point he has to decide sending the Ares III crew back and risking them all or just sending the probe with supplies. He choose the latter and you get the reasons for that too. His arc involves him being willing to take risks to save Mark, even it means losing his job.

Mitch Henderson – Sean Bean is the man in charge of the astronauts and he is a great guy who is willing to go behind Sanders back to protect his men and he sends them the data they need and the plan that Purnell created. He stands by it the entire time and for him space travel being about people is key as if people are forgotten, than what is the point of sending them out there in the first place? I really liked his character and he was one of my favorites. There is also a point where he explains the Council of Elrond where Purnell’s idea is first discussed…which is a great “Lord of the Rings” callback.

Vincent Kapoor – Chiwetel Ejiofor is truly a master of his craft as he plays a guy who isn’t much of a people person but truly becomes invested in people beyond just the idea of travel and missions over the course of the film. He is very much the Vulcan Spock to Sanders being Kirk and he is there supporting Mark through the course of his isolation on Mars.

Rich Purnell – Donald Glover plays the man who comes up with the idea of using the Ares III to save Mark and is not a people person at all as he doesn’t even register his non-communication with his boss or the director of NASA. He is a lot of fun and was my favorite character in the film as he was fully in to finding a way to bring Mark home and was a put of an eclectic scientist.

Ares III crew – Two of the crew fall in love and we see it slowly grow over the course of the film and when is a funny dad. These characters don’t receive the same level of development as Ramirez the pilot and Lewis the leader though.

Rick Martinez – Michael Pena is wonderful as Martinez who is the pilot as well as Mark’s best friend. He is a guy who jokes around, is ex-military and loves what he does. He is the one who helps the others realize what it means to go back and he is willing to leave his wife and son behind longer to bring back Mark as he knows Mark would do the same to him. He has a strong moral code and is the glue that holds the crew together. He is also the clown and Pena’s wonderful sense of humor has a chance to come out.

Melissa Lewis – Jessica Chastain plays the most serious character in the film besides Jeff Daniels’s Sanders. She carries guilt over leaving Mark behind and this drives her to action and risking herself in the end to save Mark as she won’t risk her crew. She is a great commander for this reason and we get to see her tender side with her husband as well as her closeness to Mark who is her closest friend on the mission too. Her arc is moving past her guilt to help save Mark.

Mark Watney – Watney is a sarcastic botanist and Damon truly carries this film. In this we see him have to survive in impossible conditions using only the resources NASA left behind and that Mars has. He does a great job too as we see him use Botany to grow potatoes using his own crap and the Mars soil and we later see him “Science the shit” out of everything around him in order to survive. In the end he survives and he truly owns it too as we see it is his willingness to take risks that brought him out there in the first place. Him swearing at NASA for not telling his crew he was alive was brilliant too as on multiple occasions we see he isn’t a fan of authority at all and enjoys having a good time being “the best.” His arc is facing death and moving past it to find a solution each time.

Space Travel is Wondrous, Dangerous and Worth It – This is the core message of the film as at the end Mark is teaching new astronauts in training and tells them that message. He also has no regrets as he loves what he does and what he did and is a huge promoter of more missions as he knows it is the future.

The Strength of the Human Will – There are a lot times characters want to give up, but it is when they face the challenges and rise above them that they are able to find ways to solve each of the crises they face.

This is easily one of the greatest films of the year and one I’d highly recommend. I plan to add the book to my reading list and I will be eventually buying and seeing this film again as it truly captures so much of what I love about this galaxy, space travel, adventure and science fiction and all the possibilities of the future that come with it. I’m rooting for us eventually colonizing Mars and I hope this movie will ignite the interest in space travel and colonization again.

One thought on “The Martian (2015): A Masterpiece Celebrating the Wonder of Science, Discovery and Survival”