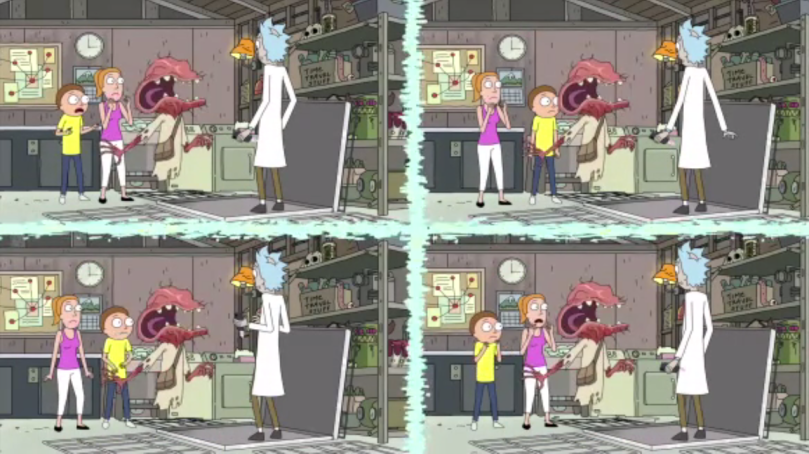 “A Rickle in Time” kicks off Season 2 and actually stands really strong on it’s own. In this we get a glimpse of Rick’s good side as well as giving us the full consequence of what happens when you mess with time. It’s really well done.

The story involves Rick, Summer and Morty dealing with the consequence of time being frozen as it fractures around them leading to them possibly being erased from reality while Jerry hits a deer facing Beth and Jerry to solve the issue and deal with Beth’s control issues.

The Pros: Fourth Dimensional Beings – These guys are in charge of policing time and it is one of them who gives Summer, Morty and Rick the collars they eventually use to escape back to reality. They have sentient guns and are powerless without the guns as one is beaten by Rick, though they are immortal so even if they are beaten they cannot die.

Summer – Summer deals with not being Rick’s favorite (no one is) and we see that she is as much part of the adventure as Morty now as she is the first to escape the collapse.

Morty – Morty nearly dies in this but Rick risks his life to save him helping Morty realize that deep inside Rick really does care…which further develops his relationship to his grandfather.

Jerry – Jerry’s cowardice is shown (he says if the police ask Beth should be blamed since his Ice Cream was Rum Raisin) but we see he can be smart as he gets some guys and fakes a Federal law to get the deer away from a hunter and his lawyer. Jerry really comes through as a good guy in the end.

Rick – Rick’s selfishness is on full display (him trying to kill his grandkids and himself) to his selflessness (risking his life to save Morty) showing just how complex he is and the fact that he is growing and does care about Summer and Morty, even if he denies it.

This is an episode that really kicks off Season 2 on a high note and is well worth checking out. The character moments are awesome and all the family members get some sort of development. The animation is also in top form as is the comedy per usual.