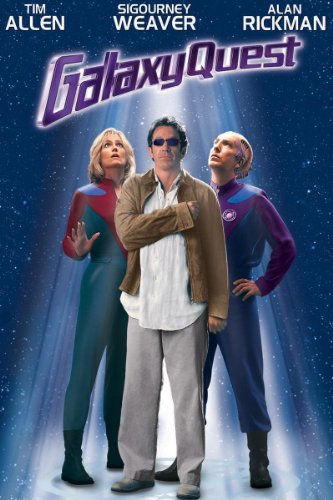 “Galaxy Quest” is one of the greatest honoring of sci. fi. and nerd culture to come out of cinema. It works because it’s characters are mostly fully fleshed out and the situations are comedic without doing away with tension, and the main cast is a lot of fun. As someone who is a huge Trekkie you can see the inspiration drawn from “Star Trek” in the characters and situations the characters are in, as well as the sci. fi. convention where a lot of the story takes place. These are just some of the elements I really enjoyed about the film, I’ll get into more depth later.

The film was directed by Dean Parisot and written by David Howard and Robert Gordon while being produced by Mark Johnson and Charles Newirth.

The story is about a cast of a once famous sci. fi. television show called “Galaxy Quest.” They soon find themselves in over their head when Jason Nesmith (Tim Allen) the Commander on the show makes a deal that they will help a group of aliens called the Thermians who are being hunted to an extinction by an evil alien warlord called Sarris.

The Pros: The Convention – The convention felt like many of the ones I’d been to as a child and do hope to visit again. There is an excitement and celebration of characters and story that make a great convention great. The ending entrance into the largest convention was awesome too.

Brandon – Is the convention goer who cosplays being a captain in the “Galaxy Quest” universe. He and his friends know the ins and outs of all the missions and episodes which leads to him helping the Commander through the situations he is under.

The Missions – Take place after the crew have been taken in by the Thermians. From getting another Sphere, to repairing the ship and using the mines in the minefield against Sarris. Most of the crew get to use their skills to their greatest ability.

The Thermians – The Thermians are a naive octopus like people who can give themselves the illusion of human form. They have

Mathesar – Mathesar is the Thermian leader and is a kind and good officer. He rises to the challenge and defends himself (his species is a peaceful one) showing how they’ve grown beyond that and can defend themselves when they need to.

The Crew – The crew is largely fantastic and has arcs that are greater than themselves. Alan Rickman (R.I.P.) as Dr. Lazarus is my favorite of them.

Guy Fleegman – Sam Rocwell is great as the character was a redshirt (side crew who dies on an away mission, there are many throughout “Star Trek” and other sci. fi. shows). Luckily he is able to subvert this trope and his awareness helps save them and he ends up becoming the security chief on the rebooted show. His story is awesome.

Tommy Webber / Lt. Laredo – Mitchell plays the Wesley Crusher wiz kid who didn’t get scarred by being on the show. He’s pretty down to Earth as a character and we see him get involved with helping where he can as well as learning how to actually fly the ship properly so that they can defeat Sarris.

Fred Kwan / Tech. St. Chen -Tony Shalhoub is awesome! He is the only character who is fine when meeting the Thermians and ends up hooking up with one of them. For him the strange is normal and it leads to some great interactions as he takes over as Engineer on the ship without a second thought while the rest of the crew is panicking and torn between their roles as actors versus those on the show.

Jason Nesmith / Commander Taggart – Nesmith is a Shatner type narcissist whose arc involves him getting pride in his work and not looking down on himself as well as appreciating his crew. He goes from only caring about being the star to knowing that they only survived because of the roles all his crewmembers played. Allen does alright.

Alexander Dane / Dr. Lazarus – Rickman does amazing as the actor who was into drama before his role as Dr. Lazarus ruined his career. His arc is making peace with the fact that people see him this way (as Nimoy had to do with Spock) and when he sees his famous quote bring hope to people fights for them and helps the Thermians rise up against their enemies. He mellows out a lot by the end too as before he is really wound up and anxious at the conventions and when he’s with the cast.

Celebrating Science Fiction – This film celebrates sci. fi. from beginning to end. From “Galaxy Quest” having a rich lore and people who celebrate it’s fandom…the the actual lore of the Thermians taking inspiration from the show.

Celebrating the Fans – The film also celebrates the fans. Brandon saves the crew with his friends as it is their knowledge of past episodes that helps them rescue the Thermians and stop Sarris. At the end Nesmith thanks them all as well and in the end they what they wanted…a rebooted “Galaxy Quest.”

Okay: Gwen DeMarco / Lt. Madison – She is sadly sidelined and her arc is her love story with Nesmith. On the show she just says what the computer says and is sexed up and it’s done even more-so in the reboot. This is an issue with television that could have been addressed but never is. Everything she does is in Nesmith’s shadow versus the other crewmembers who each get their own individual chance to shine.

Cons: Sarris – He’s a one-dimensional baddy who tortures for the sake of torture and doesn’t even seem to conquer since he only has one ship. This character had no motivations and even though he had a cool insect like design, that does not make a compelling villain.

This is a solidly good comedy outing that pays tribute to science fiction while celebrating some of the best aspects of it and the passion that has come to surround the shows. It also is one of Alan Rickman’s greatest performances and my friends and I watched this show to honor him. This is a show that manages to work both as a comedy, a sci. fi. show and even on some level a drama with the only cons being the villain and how Sigourney Weaver’s character. Suffice to say, I highly recommend this film.