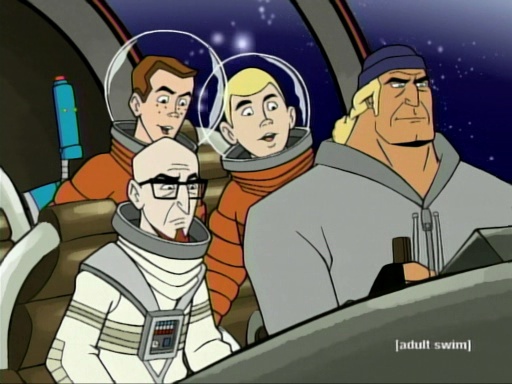 “Careers in Science” gives us Dr. Ventures backstory and his main motivation, which is largely based around his father issues as his father is larger than life and used him largely as a tool as seems the case. This episode was a lot of fun and had some great jokes, keeping up the quality I’ve come to expect.

The episode was directed by Jackson Publick and written by Doc Hammer.

The story involves Dr. Venture and his team being called to Gargantua 1 to fix it his father was the one who built the Space Station which is now one of the Wonders of the World.

The Pros: Gargantua 1 – This space station truly is a marvel and is fun to see the boys and the others explore. The location is part of what makes the episode.

Docking – Brock Samson uses all the sexual innuendo of docking the ship to do phone sex with Anna Baldavitch. The writers change the music and give the whole thing a red glow too so it’s a complete illusion to sex. It’s hilarious.

Hank and Dean – These two have a small part in this and work mostly as innocents misunderstanding everything as they spend a lot of the episode fighting and mistaking characters for dead and thinking the station has a ghost. At one point they watch Anna and Brock have sex and think they are fighting. They work well for comedy.

Dr. Venture – Dr. Venture is dealing with his daddy issues in this, though he doesn’t realize that he is the one causing most of the problems that need to be solved…as the station was having issues from a toy he left as a child that was stuck in the wires…and later his pee filled space suit sets up the ship for destruction.

Brock Samson – Brock hooks up with Anna and beats up Bud when Bud touches his shoulder. His priorities are hilarious as he seems to live simply for fighting and sex.

Okay: Anna Baldavitch and Bud Manstrong – Bud is the person who is overly formal and obsessive where Anna is the reverse. They didn’t feel fully fleshed out is the thing and seemed to mostly exist as jokes.

This was a great episode, though could have been better if Bud and Anna had been fleshed out as characters more rather than being simply the but of jokes. This episode was still a lot of fun and is another great and favorite episode of television. I’m coming to expect high quality from this show.