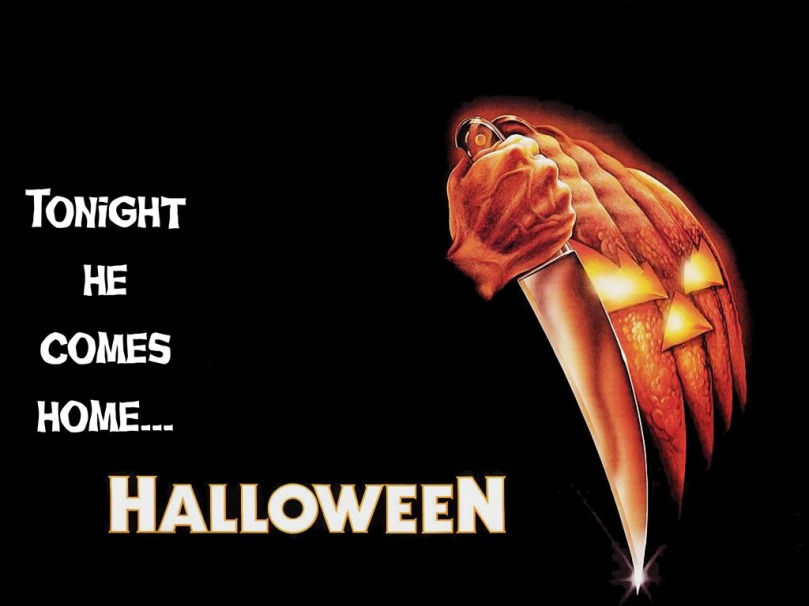 John Carpenter is one of my favorite directors of all times and this is partially due to him not only being a great director but being an amazing writer and composer too. The original “Halloween” that spawned a franchise is living proof of this. I was originally going to do a comparison of the old “Nightmare on Elm Street” with the remake, but I wanted to take a risk and watch a movie I knew would be good versus the almost always crappy quality that comes with most remakes (though the Original “Nightmare” is terrible too so mostly I just wanted to watch something good). Suffice to say, I’m glad I did. This is a movie that is a classic for so many reasons that I look forward to going into more detail on, later in the review.

“Halloween” was directed and co-written by John Carpenter while being co-written and produced by Debra Hill.

The story starts with 6 year old Michael Myers killing off his teenage his sister in 1963. Fifteen years later he escapes his asylum when he takes advantage of a storm and the asylum preparing to bring him to court to go to trial. From here he returns to his original home and begins to kill again, leaving it up to Dr. Sam Loomis (Donald Pleasence) to stop him.

The Pros: The World – The world of “Halloween” is fascinating because it is like ours but also not quite like our world. Myers isn’t all human it is implied and the reaction to him escaping is downplayed from the beginning showing people in authority in this world don’t actually care that much about risks or most people…with the exception of the Dr. We see this in our world and sometimes it is worse or better but it still exists completely in the Universe Carpenter and Hill created.

The Cinematography – The cinematography is gorgeous as the light of fire from pumpkins or the light from a lamp that can quickly go dark, putting our characters into a dark shadowy world where we see enough to get the humanity of the victims or the inhumanity of the monster. The film is gorgeous and captures how open environments are where you are safe from the monster and closed environments when the monster hunts.

The Soundtrack – Carpenter created a beautiful and iconic score that I plan on using for my own writing. The film reminds me most of “Psycho” as there is an overlay of tension that pervades it and feeds into the silence when silence is used.

The Writing – The writing is fantastic! Our characters are real and sympathetic and very much who they are, Loomis is a Dr. who knows Myers and is paranoid because of it, the teenagers are different levels of free within themselves and their relationships or bound by their duties and responsibilities and all of them care about each other even as they do the crappy things teens and people sometimes do to each other. The writing in this is golden and illustrates showing rather than telling.

The Characters – As I said in the writing segment, most of the characters feel fully defined and real and it makes them compelling even as you know they are going to die as they play into the tropes and the types of people that Myers kills (sexually active teens like his older sister when hew as six). The dimension they have, even if it is only a little showing them both as selfish and selfless, gives the story shape.

The Teenagers – The teenagers are selfish and selfless and manage to feel like real teenagers, not adults playing teens, which is a lot to say of any film, but especially horror films that have bland stilted teens who are there to die. Here they exist as characters rather than props.

The Kids – The kids are there to show the mystery and terror of Halloween as it is one of them who notices Myers and calls him the bogey man. They also end up protecting the main teen protagonist Laurie (Jamie Lee Curtis) as she is babysitting and isn’t going over to the party house where Myers is slowly killing off her friends.

Dr. Loomis – Pleasence does a fantastic job as Loomis and isn’t the traditional hero as is unable to save most of the teens and only saves Laurie because she’d fought Myers prior, slowing him down and sent out the kids for help. He’s human through it all and you get why people don’t trust him as he is overly frank and sounds paranoid.

Michael Myers – Myers is one of my favorite monsters in cinema now. From the beginning he is messed up kid with sexual hangups and targets those because of it. It’s established from the beginning he doesn’t have humanity but there are elements of humor to him too, such as when he dresses up as a ghost or reacts to the environment around him. He’s threatening and as far as we know unkillable, but he is still defeatable and he’s better because of it.

The Theme  Music – The theme music is as iconic as “Jaws” and captures the beauty and tension of the this film so well. It is simple and accomplishes so much, which is a great analogy for the script and direction. You don’t need complex or big to scare or tell a great story.

Halloween and the Holiday Theme – The theme of Halloween is huge as that was when the first killing happened and in it the trick or treat theme as one could easily see the ones who are killed after having sex getting the trick after the treat they’d shared. It is those who are already cautious and ready for the trick (Laurie and the kids) who survive. Also the theme of masks and fear are big too as Myers panics when Laurie tries to pull off his mask when he is trying to kill her.

The Art of Tension and the Slow Burn – Myers doesn’t start killing immediately, there is a slow build up as he stalks the teenagers and hunts and gets to know his old home and town again. We have him breathing deeply and him always being far enough away to disappear but close enough to get our protagonists creeped out. This makes when the killings finally happen as we see him always out of site and isolating his quarry all the more suspenseful and scary.

Fear In What Isn’t Seen – Rarely do we see the killings happen, it is always out of sight and quickly and usually done in the dark. This adds mystery and terror and us reading whatever we want into Myers. He is the unstoppable and large threat who we see is capable of anything (as established at the beginning) and may not be human. We fear him because of not only what little we see but because we don’t see so much except only what little we are shown.

The Killer’s View – Tied into fear in what isn’t seen is seeing the world through Myers’s point of view. We get the monster in his heavy breathing and in how he acts like an animal, but we know he is human. He is a monster in the stalking as we know what is coming and from the beginning this is someone who acts and is a threat.

Elements of the Monster – Breathe, size, mask, simple elements (stabbing and strangulation) and obsession. Both the physical and mental aspects of Myers are what make him so terrifying.

Great Use of Horror Tropes – Sexually active folks get killed, responsible and taking care of the kids and fine…why this works in this film though is we see Laurie getting more isolated. She wants to be with her friends and they want to be with her, but she can’t and as Myers picks them off in different ways we see her isolation grow. She’s in a place she’d rather not be having to be responsible as her friends are doing what she wants to do. Ironically it saves her but it also her curse, she hears her friend die over the phone and see how Myers displays the bodies when she finally goes over when the kids are asleep and is greeted by a nightmare she has no control to end.

The Cons: The Sheriff and the Other Doctors – These are the guys who are antagonistic towards the Doctor and useless as characters. They are the only stock characters in the film and the only reason I won’t rate this film as perfect as the very least they could have been was not annoying since they weren’t helping at all.

This is a movie that is not only a great horror film (easily one of the best of all time) but is also an all around great film because it does what every film needs to do but doesn’t…it shows rather than tells and it does it through camera work, editing and dialogue. This seems simple but it is something most horror films and other movies as a whole miss. A monster isn’t scary because it looks undead or is a cannibal, a monster is scary because you don’t know what it will do, except you know it will be something terrible. I wish more movies would remember that as this movie had me on the edge of my seat and was rewarding from beginning to end. Debra Hill and John Carpenter are clearly a dream team and Carpenter is one of my Top 3 favorite directors  and this film captures so many of the reasons why he is. Check this film out if you haven’t, chances are you won’t regret it.