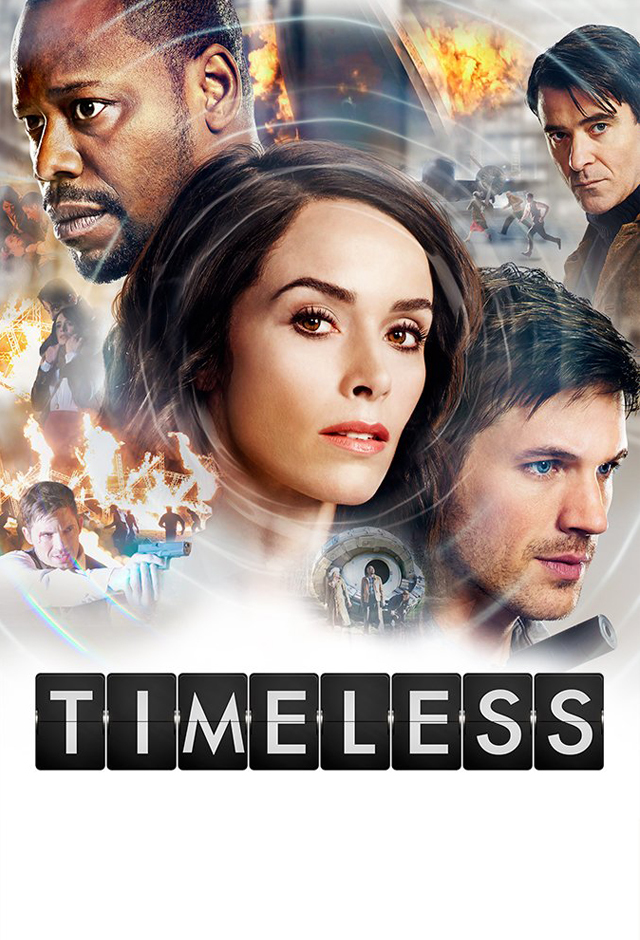 “Timeless” is the best Time Travel show out right now. I feel comfortable saying this because “Legends of Tomorrow” is fun but it is mostly just good and “Doctor Who” has been going through the Moffat death so the less said about that show the better, unless he manages to not make the same mistakes he’s made during his run of Showrunner of the show…this show is counter to both of those.

The narrative is tight, the characters have arcs, the history at least tries to be accurate and the tension is always high and the story is always moving. These are the non-spoiler reasons why you should really check this show out. This is the best show to come out of NBC since “Hannibal” though I have yet to finish “The Good Place” which could possibly beat this show in quality.

The show was created by Eric Krypke and Shawn Ryan.

The premise involves the adventures Lucy (Abigail Spencer) who is brought in by the government to hunt down a terrorist and former government agent named Flynn (Goran Visinjic) who stole their main Time Machine and is seeking to change history. Lucy (a history professor) must work with Wyatt (Matt Lanter) (a soldier) and Rufus (Malcolm Barrett) (one of the inventors and the pilot) to stop Flynn in the prototype Time Machine that still remains.

The Pros: The Premise – The idea of trying to save the past or at least stop the past from changing too much by chasing another through time is fascinating, especially as it gives the writers a chance to interpret large events and what they mean in the context of American History and what might change if they hadn’t happened. It was this core premise that drew me into the show in the first place.

The Locations – We have DC during the Red Scares, the Assassination of Abraham Lincoln, the crashing of the Hindenburg, the Fall of the Alamo and others to name a few.

The Characters – The characters are the strongest part of this show, even the minor characters get some good exploration where their motivations are explored and we see why it is they fight.

Anthony Bruhl – Matt Frewer plays Bruhl, one of the scientists working with Flynn to stop Rittenhouse but who changes when he sees how Flynn’s actions are putting Rufus in danger. His arc is one of redemption as in the end he is helping the team stop Flynn from killing people through time.

Special Agent Denise Christopher- Sakina Jaffrey has been in a lot of shows I like, from “Sleepy Hollow” to “House of Cards” she really owns the roles she is in and in this she is the government agent who learns the truth from the team and helps them fight Rittenhouse. The one way she is used by Rittenhouse is she brings in Flynn at the end.

Connor Mason – Mason is the inventor of the Time Machine and the organization Mason Industries that owns it. He is presented as an antagonist through most of the show because he is being blackmailed by Rittenhouse. Luckily he plays Rittenhouse and reveals their organization and we learn he knows that he is going to die but wants a good future for Rufus. Paterson Joseph is great in the role.

Jiya – Jiya is one of the scientists who is being trained to take Rufus’s place after Rittenhouse kills him. She is a great character who we see resist Rittenhouse when the team isn’t around and workis with Special Agent Christopher to do so. She is in love with Rufus and we see that they are partners at the end as she is not only helping them in enemy territory but she goes with them and pays the price (sees possible futures) when she is the fourth person on the ship. She survives but we don’t know the full consequences yet.

Wyatt -Wyatt is the soldier who learns that personal only causes more problems as his desire to bring his wife back only leads to him having trouble in the present and the war against Rittenhouse becoming all the more difficult. He is an honorable soldier who by the end has been shaped by his losses. Matt Lanter is great.

Rufus – Rufus is great, he brings perspective to history as there really isn’t any time in American History where things were good for African Americans. His cynicism to this helps bring down Lucy’s idealistic view of history and we see that he is great thinking on his feet and solving problems related to the ship, for example when they are stuck with the lifeboat broken he gives the equation through history for Jiya and the others to find them and bring them back. Malcolm Barrett is one of the strongest actors on a show of greats.

Lucy – Lucy is the main character and is tied to everything as we see it is her diary Flynn is using to target Rittenhouse (which makes more sense at the end) and we see her come to agree with Flynn’s aims by the end as in the present Rittenhouse is hurting those around her and upholding the worst parts of history. She also finds that her parents are both high up in Rittenhouse and that all her team did to fight them is for not. Abigail Spencer is amazing.

Flynn – Flynn is the antagonist through the series, who by the end we see was right all along. His sole goal is the destruction of Rittenhouse in all time and places in order to bring back his family they killed. In the end Lucy convinces him of nobility and to trust her grandfather to work from within to bring down the organization, but it fails as even though so many get taken out Rittenhouse no controls the Time Machine and Flynn is arrested by Agent Christopher for terrorism leaving Rittenhouse with no one to stand against them.

Rittenhouse – Rittenhouse is a fascist organization that is bound by blood that seeks to control the past, present and future. They are the primary antagonists

Time as Malleable – Events change when the teams go back in time. At one point Lucy loses her sister and her mom is no longer sick and she is married, the three of them show up in time under the names they gave and historical figures die who did not. Time always changes and can never be put back to how it was.

The Ending – We discover that Rittenhouse has the time machine when Lucy’s mom reveals that she is part of Rittenhouse too, all this after so many from Rittenhouse have been brought in from Lucy’s grandfather and Mason’s actions…The win ends up ringing hollow as Rittenhouse was the one playing them all.

Okay: Lucy’s Parents – Lucy’s parents are the least explored of the characters. We learn that they are both with Rittenhouse, but there reasons for choosing it beyond power aren’t really explored. This was a major missed opportunities, but the actors do a good job with what they are given.

This is a series well worth your time if you have any passion for science fiction or time travel shows. The cast is solid and it does a good job of turning the expectations of the show on it’s head by the end setting up the rest of the season, but also how the show could have started in the first place as now Flynn is shown to be right as Rittenhouse has won. I’m curious to see how they deal with this and how our Team will fight back. The story ends with a dark twist, whether it is Jiya seeing a destroyed San Francisco in a vision, the arrest of Flynn and the reveal that Lucy’s parents are high up in Rittenhouse. Can’t wait to see what they do with this show in Season 2.