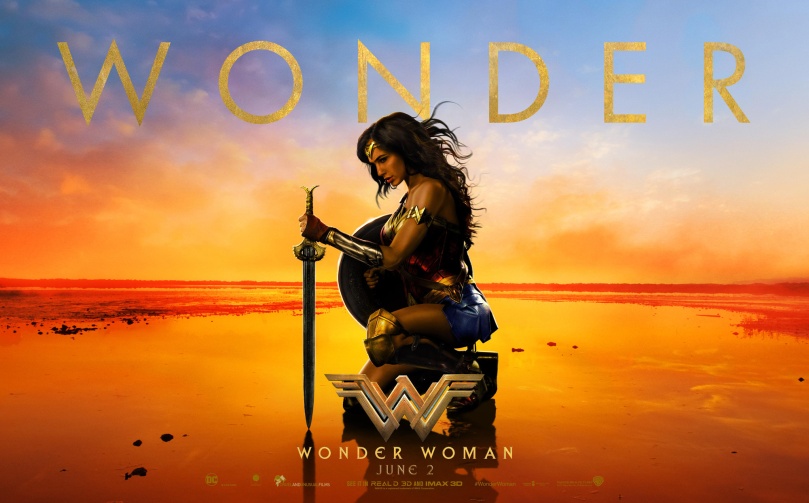 “Wonder Woman,” is a great. I just need to put that out there now before I get into the reasons why because it really is amazing and if you like comic book or super hero films you will enjoy this film. DC has been having a hard time finding heroes, Superman doesn’t really save anyone in the films he’s been in and when he does it is in a somber way, almost like he hates it…and Batman is beating up criminals and leaving them to die in prison so he isn’t exactly what I’d call a hero either as we never have the chance to connect with the people he is supposedly protecting. Wonder Woman changes all of that in her film. DC finally gives us the much needed hero which in turn may save their cinematic universe.

The film was directed by Patty Jenkins, written by Allan Heinberg and produced by Zack Snyder, Richard Suckle, Deborah Snyder and Charles Roven.

The story involves Diana (Gal Gadot) who is pulled into World War 1 when spy Steve Trevor’s (Chris Pine) plane crashes near her home, the Island of Themyscira. Going against the wishes of her mother Queen Hippolyta, she joins him to seek out and destroy Ares, who she believes is responsible for the War and the peace broken on her Island when Steve arrived.

The Pros: The Premise – The premise is wonderful as we get a fish out of water story as Diana and her Island are outside of the world in a magic bubble. This leads to some great moments where Diana has to adapt to a world full of technology where there is patriarchy in all power structures and her very existence upsets them (as she is a princess from a Matriarchal Island). The premise is not only her hunting down of Ares but her own self discovery and finding her purpose and living what it means to be a hero.

The Universe – Themyscira (the Amazon Island) is an amazing place that looks like an ancient Greek isle where women outside of time train and fight and have representatives and well as Queen ruling them…we have World War 1 and see the horrors of trench and chemical warfare and we have Diana in the present, unaged showing that even as he has changed she is still the Amazon who left that Island long ago.

The Characters – The characters are the best part of the film as each of them reveals contradictions about themselves. Diana is confident and driven, but also unsure and can easily despair. Steve is a spy who lies, smuggles and kills but also will risk everything to stop the greater conflict and the other side characters reveal things about themselves too. My favorite character was Queen Hippolyta’s sister Antiope (played by Robin Wright) who is the Amazon General and went against the rules to train Diana and in the end dies preparing Diana for the fight against Ares…and the commandos who go with Steve and Diana are amazing too as each of them is broken and courageous, each in their own way.

The Horrors of War – The horrors of war and despair it can bring are handled really well in this film. One of the characters we follow has PTSD and another lost his dream when the Great War began. Diana also loses her mentor, her Aunt Antiope to a German soldier when Steve’s plane crashes near the Island…and at one point in one of the best parts of the film, Diana breaks the No Man’s Land in the trenches and saves a starving village…only for the Germans to gas the village…There is so much despair and the hope that we see are in the acts of saving others or simply surviving. War is hell, and this film presents it beautifully.

Okay: The Villains – There is Doctor Poison who we never get to know but is a sociopath only wanting to kill and destroy, we have a war obsessed German General who hams it up well enough but is forgettable…and of course Ares who appears first as an ally and reveals that he didn’t have to corrupt humanity much at all, just push their own destructive urges. Ares is the best of the lot but even he could have been explored a lot more. Each of these villains have potential but like Marvel Phase 1 Villains they are disposable and fail to enhance the story.

The Message – The message is one of hope and love (which is alright in presentation, but seems to have been completely forgotten in her exile) and a call for equality (the message that worked) as Diana simply by existing and standing up for herself, changes the circumstances of those around her. In speaking up and taking action she is the hero…whether it is to Ares, her mother or the British and German Generals.

The Cons: Bullet Time – The action overall would be great if not for the bullet time. There are so many scenes were the action is slowed down and it just hurts the film. There is no reason for them to do this and it doesn’t add anything to the story and just distracts from whatever the focus in the scene should be. This is a Snyderism that should be used sparingly, if used at all.

Diana’s Exile – After Diana defeats Ares, she goes into exile. We never find out what she was doing in between World War 1 and “Batman v. Superman” but for a movie that had her say her message is to bring hope and love to the world…we don’t see any of that and her making that her thesis statement should have been shown, rather than her going underground and only becoming Wonder Women at the end of “Batman v. Superman.”

This movie won’t be in my Top 5 of the year, but it doesn’t change the fact that it is still a favorite. This is a movie that remembered what it means to be a hero as the whole point of Diana joining our world was to protect the weak and fight for the innocent. This was something DC forgot when they started their cinematic universe to compete with the MCU. I hope going forward they can remember it. This is a movie I highly recommend and I hope it not only changes the DC universe but gives us more heroes like Diana in future films as we finally see more of the amazing women that populate the world of heroes.