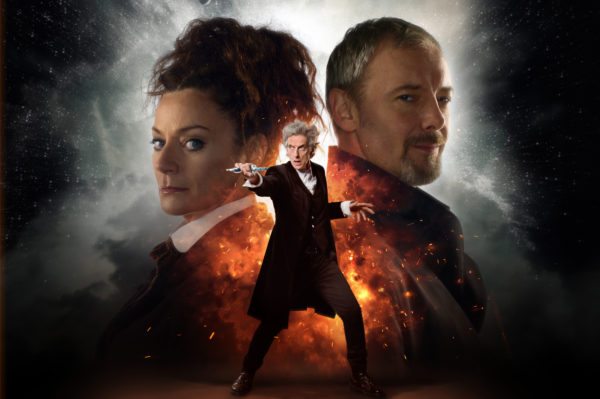 Steven Moffat as a showrunner as usually always been great at Penultimate episodes during his run in regards to two-parters. “Heaven Sent” was a brilliant exploration of the 12th Doctor’s psychology, self and drive and “Dark Water” gave us a great reveal of what the Heaven was during that season as well as the identity of Missy. His Finale’s on the other hand are more of a mixed bag but I’ll get into that when we review the finale for this season. This is an episode, like the others above that gives us that same level of threat, character development and reveals leading to one of my favorite Doctor Who stories.

“World Enough and Time” was directed by Rachel Talaley and written by Steven Moffat.

The story involves the Doctor, Bill, Nardole and Missy answering a distress call of a giant ship that is trapped above a black hole. The Doctor has Missy lead the mission, hoping that she can prove she is good but things soon get out of hand when a mistake from a civilian they are trying to help leads to unintended consequences and a darker plot at hand.

The Pros: The Doctor, the Master and Bill – There is a scene early on where Bill is expressing how she doesn’t trust Missy and the Doctor recounts his memories of the Master being his best friend at the Academy. It is wonderful as we see how close Bill and the Doctor are (the fact that he is sharing his past with the Master) as well as his trusting in the good in people, even with all he knows. It is powerful and I loved how this was explored and kicks off the episode.

Creation of the Mondas Cybermen – In this episode we learn the Master created the Mondas Cybermen when he he used a large colony ship trapped near a black hole to make people wish to live even if it was painful since life was hell and infection already. After a mistake Bill is shot and his Proto-Cybermen capture her as he pretends to be the assistant as he pulls the strings of the colonists. In the end he uses Bill’s trust to trap her and change her into the first of the Mondas Cybermen. The episode works really well as all are trapped at the bottom of the ship, infected by radiation for the ship. It is a living hell where all are sick and dying, which is a prime world for the philosophy of Cybermen (strength over feelings and emotion) rules the day.

The Death of the Good and the Master – The theme of the episode is the fight or trust in the good and the better nature in others. This episode has this end in a few ways, Bill becomes a Cyberman trapped in a living Hell, Missy joins forces with the Master and the triggering of the events in the episode happen when an alien shoots Bill when he panics. Fear and despair rule the episode…from the colonists who want to become Cybermen, Missy missing her past ways and having the chance to be that way again and Bill losing her humanity…for the Doctor all that is left is the good he chooses to do because the episode has killed it everywhere else.

This is an episode where there wasn’t much I could find wrong with it besides brief moments of pacing. It begins with a stinger with the Doctor leaking energy on a ice planet before we jump to the past and set up the themes of mortality, death and choice. This is all handled beautifully and I really enjoyed the reveal of Simm’s Master and the fact that he’d been manipulating Bill the entire time in order to get the Doctor and his future self Missy. The setup is beautiful and the Doctor and Nardole are left in a state where anything bad can happen as the Doctor failed to protect Bill and must face the consequences from that.