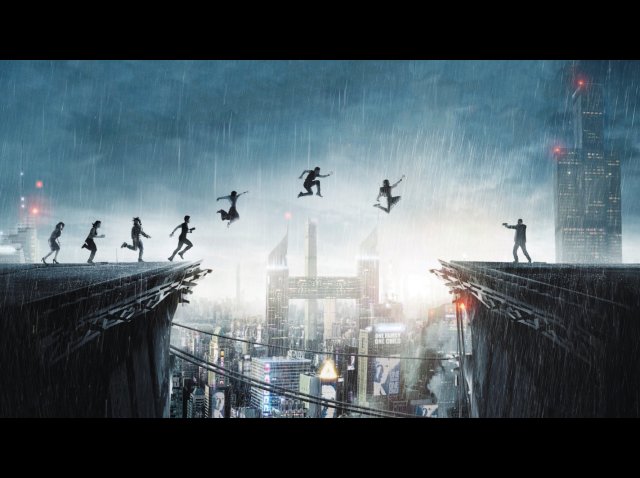 “What Happened to Monday” is the type of dystopian Science Fiction that I love. It feels like a Philip K. Dick novel, which has lead to some of my favorite films adapted from his work…from “Blade Runner,” “Minority Report” and the original “Total Recall.” The films give us future tech. but also a world that is fascist and dehumanizes it’s population in some way, this film is cut from that same cloth and is executed so well it has become one of my favorites.

The film was directed by Tommy Wirkola, written by Max Botkin and Kerry Williamson and produced by Raffaella De Laurentiis, Fabrice Gianfermi and Philippe Rousselot.

The story takes place in a overcrowded, polluted dystopian future where families can only have one child. When Karen Settman (Noomi Rapace who also plays her daughters) has 7 identical twins her Grandfather Terrance (Willem Dafoe) hides their existence by having them adopt their mother’s identity and pretending to be one person. When Monday goes missing years later it is up to her sister’s to solve the mystery and keep their secret safe.

The Pros: Self and Identity – One of the major themes that the film explores is the issue of identity, given that the 7 sisters have each adopted the identity of Karen Settman and can only be themselves when they are trapped in the house. This leads to some of them to fully embrace the idea of the character and believe they are them, forgetting the day of the week they are as each of them deals with it in different ways by either escaping (Tuesday is a druggy) or embracing their roles outside of the identity of Karen as we have the one always in training to protect and the tech. who is tracking all the events that happen in the search for Monday. Each of them express who they are in different ways and in the end we see how that connection to identity shapes the survivors as there are a few name changes at the end tied to the history of the characters.

Individualism, Collectivism and Human Value – The film starts out showing how global warming has been leading to mass destruction and starvation and the steps the government takes to make sure the overall human population can survive. This is most scene in the one child policy and how C.A.B. takes the siblings when that happens so that they are out of the competition for food. At one point Glenn Close’s character debates with one of the sisters on that very question and points out how if more people had been like their mother the world would be dead given the lack of food. This question is never fully answered and the fallout of the finale leaves things open as far as what will happen to humanity. Glenn Close’s character was a villain whose intentions were good but we see how in going collectivist it misses the point of the value of the individual contrasted with the beginning that showed how individualism taken to the extreme with no thought of the world and future lead to the dystopia in the first place. The film comes out on the side of individualism but given the opening, I believe it leaves things open enough as to what the future of this world and ours hold.

Okay: The 7 Sisters and the Danger of Stock Characters – Noomi Rapace is an amazing actress. We see her play 8 characters, each with different levels of depth. Honestly this film would have worked better as a show as a few of the sisters I couldn’t even place in regards to their motivation, they only existed as a stereotype (the tough woman, etc.) She did give a lot of depth to certain characters though, the greatest being Saturday, Friday. Monday and Tuesday. We can see where their conflict comes from too as Dafoe’s performance as their grandfather is amazing given he is willing to go any length to protect them (if one loses a finger, they all have to if they are continue playing the role of Karen Settman so suspicion will not occur) to keep the lie going, even though that leads to harm to them all and shows just how broken this world and he himself is. Each of the sisters carry that damage with them as well as carrying the lie of Karen Settman, the role each must play during their day of the week. The stock types make the reveal a little predictable at the end but it still managed to surprise me in other ways in regards to who lives and dies when the government is hunting them and in regards to what happened to Monday after she goes missing.

This is a film I highly recommend. I’m staying away from spoilers because it is an easy film to catch, as it is on Netflix currently. I was never bored during this film and the action and ideas kept me waiting to see what would happen next. I don’t know whether it will make my Top 5 at the end of the year, but it is certainly one of my favorite films. Dafoe and Rapace owned the roles they played and the ideas of identity and human value are explored so beautifully through the world and the sisters that I can’t help but recommend this film. This is an original and isn’t based off any prior property. I really want to see more sci. fi.’s of this level of quality in the future, that pull from themes and show the different costs of existence, society and identity.