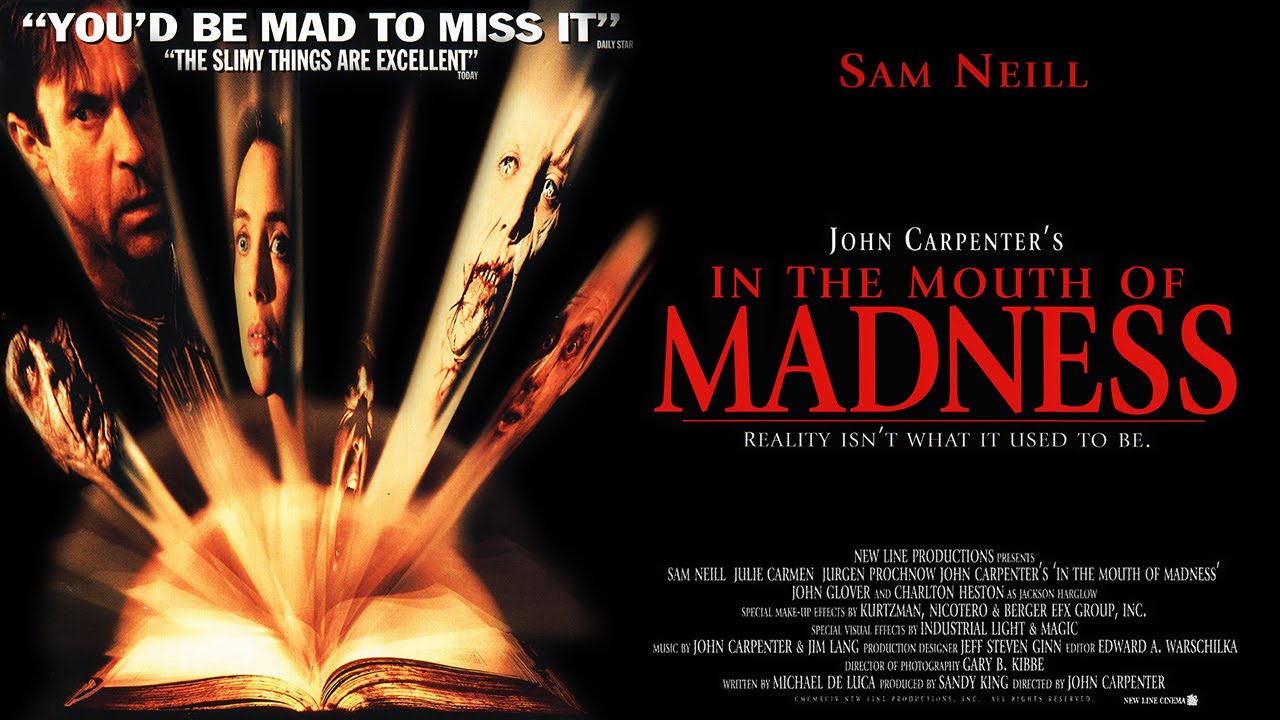 We begin Halloween Horror Week with “In the Mouth of Madness” one of the films in John Carpenter’s Apocalypse Trilogy. John Carpenter is one of my favorite directors with the “Escape” series, “Halloween” and “The Thing” being some of my favorite films. This film joins those as a favorite though it does not reach “Halloween” or “The Thing” level quality. This is really smart film and it was well written, what really only brings it down are how some of the characters are written and some of the cast performances.

The film was directed by John Carpenter, written by Michael De Luca and produced by Sandy King.

The story involves John Trent (Sam Neill) recounting how he ended up in an insane asylum, as his story begins he is an insurance investigator who is investigating the disappearance of a famous horror author named Sutter Cane (Jurgen Prochnow) who has gone missing and whose editors need in order to get his latest book, “In the Mouth of Madness,” released on time.

Pros: The Lovecraft Themes – The main themes that are Lovecraftian that are done really well in this film are people being driven mad from beings from beyond (Sutter Cane’s books are warping reality because of being from beyond) body twisting (the people in Hobb’s End and those who come to Hobb’s end, a character in an insane asylum, people cut off from the world (Hobb’s End) and the pointlessness of man’s fight against the greater universe (John discovers that he is a character in one of Cane’s books so he never had Free Will. These are some of the many Lovecraftian themes in the film and easily what it does best.

What the Storyteller Does to the Characters – As someone who writes fiction as a hobby, authors are cruel to our characters. We create drama for them and have them suffer so that they go through arcs. The sad thing is they are entertainment to us to some degree as stories are entertainment and we may care about our characters but not in the same way we care about real life people. John Trent feels that in full as well as the horror of realizing he is just a character in a story.

The Power of Meta-Narrative – One of the things that works really well in this film is the meta-narrative. You have the narrative of Cane’s past books woven into Hobb’s End as well as “In the Mouth of Madness” weaved through the story as John comes to realize that this film is his story and he is trapped inside of it. These levels of narrative and meta-narrative lend the story power as the different levels of story inform one another and strengthen the themes.

What is Reality? – A major question the film asks is if we are just in a story that someone else is writing. That is John Trent’s arc and from there the question is asked whether his reality really was really warped by Cane or if it’d been warped all along. Is the only reality Sutter Cane’s and John Trent is trapped in a book? Or was reality really warped by being beyond and the world of the film was our world that was transformed? I believe the movie leaves this question open, which strengthens the narrative.

Okay: The Cast – The only great members of the cast is Sam Neill. I believed his terror and he felt fully realized, even though we didn’t necessarily get to know his character as well as we could have. The others are okay but I wouldn’t really consider their performances great. They felt like set pieces that fit within the narrative but not fully realized characters.

The Characters -This was a film with huge ambitions but the writing doesn’t fully realize the characters within. Even John Trent could have been better realized in regards to his motivations and what he was going through. All the characters are guilty of this. They aren’t bad but Cane doesn’t feel threatening, I never felt I was given the chance to care about Linda Styles, Cane’s editor and besides John Trent the rest of the characters feel like parts of a puzzle that work but not unique in and of themselves. Which is a pattern I’ve noticed in the Lovecraftian adaptations I’ve seen thus far.

If you are a fan of Lovecraft, John Carpenter or horror films you should really check this film out. This is a brilliant film and I love how it explores the nature of reality, the power of the storyteller in regards to the characters they create and the use of meta-narrative. It would have been perfect if the characters had been better written and the film had a better cast but for what it is, it is a really good film and one I’d highly recommend. This is a favorite, and I plan to watch it again in the future.