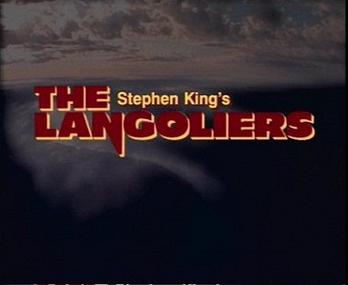 “The Langoliers” is an infamous Stephen King film. The Nolstalgia Critic did an early takedown of some of the more hokey aspects of it. This is not a good film, the acting and writing are awkward and it could have been cut way down in length. The thing is though, I don’t hate this film. The core idea and the tone are actually handled really well and the Stephen King theme of people being our own worst enemies is done beautifully given the other limitations listed above. I’ll get into what I mean deeper into the review.

The mini-series was directed by Tom Holland who co-wrote it with Stephen King. The film is inspired by Stephen King’s short story Four Past Midnight.

The story involves a bunch of passengers who find themselves trapped on a plane in which all the passengers have disappeared. From here they must find out what is going on, where the other passengers are and where they’ve been transported to.

The Pros: The Tone – The tone of this tv show is actually pretty great. There is a sense of foreboding, isolation and paranoia. The characters are trapped and it pervades the piece in how the music and scenes are presented. We get scenes of silence where we are in the head of our characters and the mystery author being a major character leaves the trap as something to be un-weaved, increasing the sense of isolation and paranoia.

Isolation and the Consequences of It – Stephen King loves exploring what fear does to people, especially when people are cut off from society. “The Mist” film did this extremely well and the book “The Stand” and even aspects of the Gunslingers world encapsulate this too. This theme is handled decently in this film. We see how isolation drives our characters insane and causes conflict between them, eventually leading to one of the folks who is already unstable, going off the deep end and breaking down, becoming a threat to everyone else who is still alive.

Unseen Terror – We don’t see the Langoliers (the time monsters) until the end and it is the fact that we don’t see them that really helps increase the foreboding tone and sense of isolation. We see time collapsing on itself at one point and that is terrifying enough as our characters are in a race against time and don’t even know if they have a way out. It is in the fact that we don’t know what these creatures are that keep up the tension, we hear them approaching and see how it makes the characters afraid and that is enough.

Exploring the Nature of Time – At the end of the day this is a time travel story. Our crew passes through an event where they find themselves in the past and learn that time gets destroyed by the Langoliers as it catches up to the present and as they pass into the future they realize they can get ahead of the present as well.

The Cons: The Writing – The writing is not very good, it is actually kind of bad. The characters are all tell and no show and it is a major thing that brings the story down. The best parts of this film are when characters are silent or the moments of implication in a backstory. A character not sharing their backstory is when this film is strong. This was co-wrote by Stephen King, but that couldn’t save the problems in the script.

The Performances – The performances are a bit stilted (this is made for television) but some characters are great in just how hammy they are. Bronson Pinchot is enjoyable in how over the top he is and I did enjoy Stockwell’s mystery author. He was the only one who seemed to know what he was doing. A lot of the others felt like they didn’t really know what they were doing.

The Langoliers – The Langoliers are a joke. Special effects of this era in television weren’t good and these creatures are a shining example of it. They clearly look like bad CGI and they aren’t scary in the slightest. The thing is this could have been easily avoided, we should have never seen these things or not had them at all. Time become erased as it comes to the present is a scary enough concept as is without adding badly done teeth monsters. When they popped up on screen I burst out laughing….that’s how bad they look and how all the tension and build up was immediately canceled out.

This was a film that could have been good if it hadn’t shown the Langoliers (or gotten rid of them all together) and with some better casting and writing decisions could have even been a great mini-series. Sadly this is not the reality we are in and it was the length, performances and finally the Langoliers that made this film merely okay. I’m not ready to write it off as I did enjoy the idea and Bronson’s over the top performance coupled with Stockwell’s exploration of unraveling the premise was enjoyable. So I didn’t hate this film, though there is so much that doesn’t work. If you like Stephen King and his works, this is worth checking out for how he explores time but besides that…you have to really enjoy King to get enjoyment from this work. I understand the infamy of this film, even if I don’t share the hate.