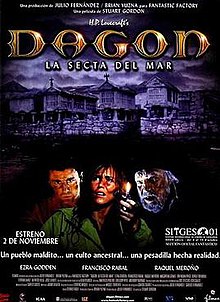 I’m at the point now where I prefer Stephen King to H.P. Lovecraft. With Lovecraft you get a bit of racism, sexism and victimization and nothing that happens has any point, which would make a fun game but not a good story. This film is a shining example of nothing mattering and victimization. This works in the context of a horror film but given all the good Stephen King books I’ve read or films I’ve watched…I like my characters to be empowered, even if they lose they should die fighting and in Lovecraft, that doesn’t happen. This comes out in the adaptations and based off my own bias I have discovered in regards to what I enjoy in a horror film. The one exception I can think of a Lovecraftian horror film that doesn’t fall into this trap fully, is “The Void” which is well worth checking out.

The film was directed by Stuart Gordon and written by Dennis Paoli while being produced by Carlos and Julio Fernandez, Miguel Torrente and Brian Yuzna.

The story involves Paul who is on vacation with his girlfriend Barbara and another couple named Vicki and Howard. When a storm happens Paul and Barbara are forced to go for help at the town of Imboca, but all as not as it appears to be as horror unfolds upon their arrival.

The Pros: The Terror of a Lovecraftian World – Unlike “In the Mouth of Madness” “Dagon” truly captures the terror of what it would be like to have no control and be trapped and isolated. “In the Mouth of Madness” explores the terror of being a character in a story and having no agency, where “Dagon” is having your agency ripped from you. That is one thing that this film does really well and why it works as a horror film.

The Raw Perspective – The film isn’t filmed all that well in regards to the fact that it isn’t stylized and looks raw. This does a good job of contributing to the terror as it gives the film an almost documentary feel, and helps hide the bad CGI making the more practical costumes and effects stand out.

The Town and Setting – The town of Imboca (a translation of Innsmouth like the Lovecraft story of the same name) is terrifying. What would a town be like that was full of people who had been warped by an old one into half-fish people who worship a monster? In this we see that and how they have lost all their humanity and perspective. This adds terror as wherever Paul runs to, he isn’t safe as there are always monsters chasing him and his understanding of what he knows to be true is changed.

The Cons: Paul’s Transformation – We learn that Paul is part fish-person as after Dagon takes Barbara to be his consort he transforms and receives gills. The steps to get here aren’t believable though, it just happens and given how sudden it happens, his human motivations should not change but they do. He should be trying to save Barbara or at least fulfill her last wishes of wanting to die, instead he follows the High Priestess Uxia (his half-sister who wants to be his lover) into the depths where Dagon is.

Dagon’s Motivation – Why does Dagon need a consort? There is no reason for Dagon to take human slaves to have sex with…he is a giant tentacle monster that can warp people without giving birth to them. This I felt was pretty weak and given that Dagon is key to the story we never learn about what motivates it.

The Victimization of the Women – Vicki gets rapes and Barbara is going to be raped by Dagon. This is what happens to the women of the story who aren’t Uxia, whose soul purpose is to victimize women as sacrifices. This is awful and it doesn’t make any sense why an Old One like Dagon would even want this, this is Lovecraft’s warped perspective and honestly a major problem in his writing as this seems to happen to any woman who appears in his stories or stories adapted to film.

The acting isn’t great in this film but I don’t really know if that is a point against the film as it feels raw and real which contributes to the terror aspect of the film, so I can’t really include as a pro or con. This is a film that if you enjoy Lovecraft, you should check out. It captures the worst and best aspects of his writing and the themes within. What I enjoyed most was the terror of the town, which took me back to the town in “Resident Evil 4” where there wasn’t a safe place and you were always on the run. This and the overall tone and foreboding are easily what I enjoyed most, while the characters and events were what had the most to be desired.