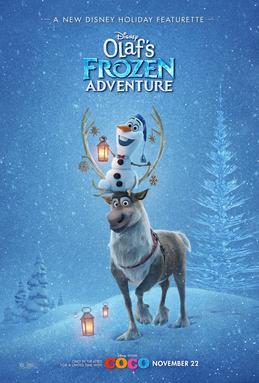 They played this crap before “Coco.” I think one reason I wasn’t prone to like it going in is Pixar has amazing shorts, and this was around 20 minutes. Seriously, the best thing that is happening in regards to this film is Disney pulling it from theaters. This is a thing that should have existed as an extra on “Frozen’s” Blue Ray. I enjoyed “Frozen,” I think it beats “Tangled” and is up there with the rest of the modern greats of this new 3D Disney renaissance…I did not enjoy this though.

When it comes to Christmas or really any holiday specials I am pretty picky. The only one that I could stay is great are the different retelling of “A Christmas Carol,” and that is largely because they are about more than just trees, myths and gifts…they have a larger purpose and it is a man forced to grow and see the world beyond himself. This film has none of that depth, with the exception of only one scene that could have been 2 minute sequence in “Frozen 2,” when it eventually comes out.

That scene is where we see that Elsa and Anna shared pictures of of Olaf as “Do you want a Build a Snowman?” Was the only connection they had growing up since Elsa was under room arrest after those events. It is touching and if the movie had just been that it would have been great, instead we get Marketing^TM! Got to sell those Olaf dolls. Also the cast is all back so their voices sound lovely, even though the lyrics are awful and on the nose. (Holiday Tradition is repeated in every scene in what felt like at least 3 times).

Olaf isn’t bad but what he is used for is. He goes around the village collecting traditions so he can do jokes with Sven and so there will be more Olaf toys to market. Olaf appeals to everyone and the most important thing is stuff! God, I can understand if people hate the holidays after this short…Olaf is in everyone’s business and in the end has to be found because of his own mess up and in the end he was the tradition all along! This is a story with no consequences that is just there to remind you these characters exist and “Frozen 2” is coming!

After that they have a big feast on the lake and you know what, the fruit cake that was given in his search is dropped on him from the hawk who took it. Oh joy, more stupid humor! Buy that “Frozen” gear! They all have new costumes in this! Get Olaf with a bow tie! Look at Elsa and Anna’s new dress! Christmas is coming, better buy those new toys!

This should have been an extra in a DVD, ideally in “Frozen 2” or the “Frozen” re-release. This film crapped all over the beautiful shots Pixar usually makes and even took time away from developing characters in “Coco,” which is the best Pixar film since “Inside Out.” This film purely exists for marketing and my guess is it will sell a lot of Olaf dolls, because of course it will. If your theatre is showing it, skip it if you can and find out when “Coco” actually starts. If this is the new normal for “Pixar” openings Disney is on the way to ruining one of the best artistic companies they own.

Final Score: 5 / 10. 5 only because the voice actors and animation are good even if the writing and story are garbage.