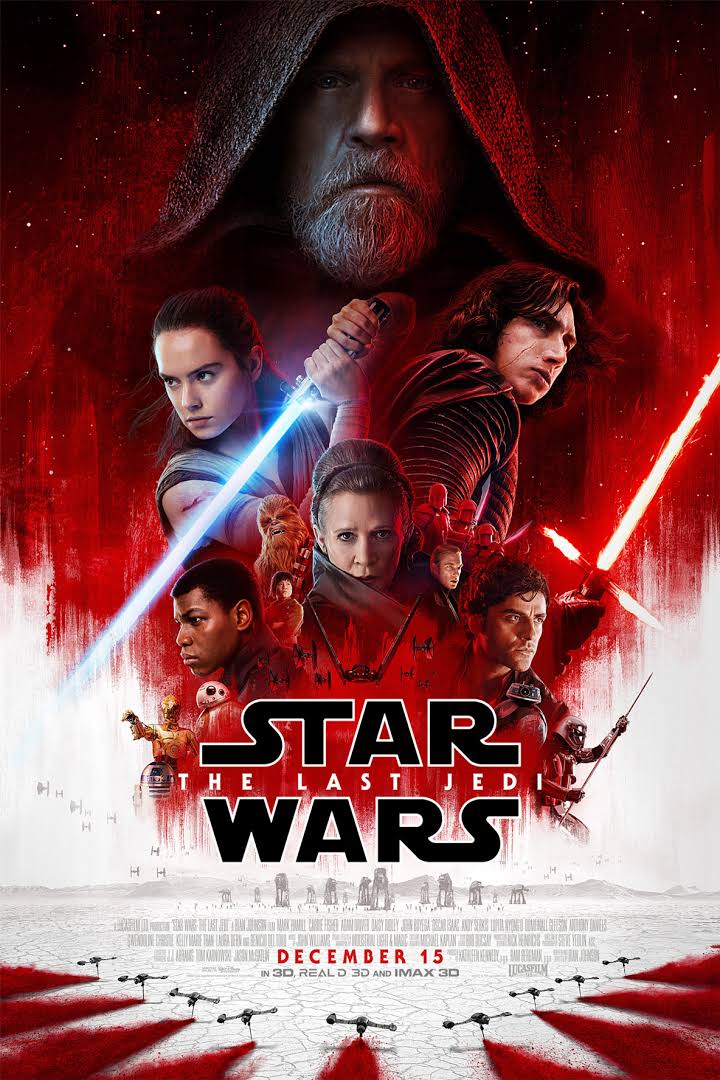 “The Last Jedi” is my second favorite Star Wars film. This is a series that is second only to “The Empire Strikes Back,” and in many ways has greater depth even though the structure of this film is a bit of a mess. What this film does though is upset the status quo, delve into the reasons the First Order and Resistance have for even existing in the first place and also a much deeper analysis of “The Force” that we haven’t really gotten since the Original Trilogy. Before I get into spoilers, this is a film with the best characters and themes thus far, amazing character development and emotional payoff, amazing action and it is easily the most beautiful of all the Star Wars films. Seriously, check it out.

The film was directed and written by Rian Johnson while being produced by Kathleen Kennedy and Ram Bergman.

The Pros: The Cinematography – This is visually the best looking of any film in the Star Wars franchise. Whether it is the filming of fight sequences in space or within a ship…the camera executes the action beautifully and each planet was somewhere I wanted to return back to after it was done.

The Universe – This Star Wars has quite a few different environments and animals. From the adorable porgs, to crystal foxes, to the salt world of Crait, Luke’s Island and Snoke’s Flagship and a Casino World. I was never bored because there was always more to see as each environment was so rich.

The Reason for Resistance – One of the major themes of the film is the reasons to resist. We see this as a class struggle in regards to oppression through the eyes of kids and Rose, a character we are introduced in this film…and also that personal identity is a huge role too and that finding the balance between them is important. Poe is driven by ego and glory for much of what he does but comes to see that it is bigger than each fight, the war is larger than any one person as the individuals and groups define what it means to resist, just as much as if not more than the personal reasons to fight.

The Cost of War – So many people die in this film. There are lots of heroic sacrifices, but also the people who are being oppressed by those profiting from the war, the deaths of so many soldiers on both sides who die. You feel that in this and it does a good job humanizing both the Resistance and the First Order. War is hell and sometimes no one wins, this film captures that theme beautifully.

The Characters – The characters are the best part of this film. This film is all about relationships between characters, be it Leia and Poe, Rose and Finn, Kylo and Rey or Luke and Rey. Each relationship gets developed over the course of the film and reveals layers to the characters that didn’t exist in “The Force Awakens.”

Vice Admiral Holdo – Holdo is a character who has got a lot of crap from the fanbase, but she was one of my favorite characters in the film. She was respected for winning in the past but Poe doesn’t get that. She is presented as an antagonist through a good portion of the film, and the payoff of who she actually is and what she is doing is great.

Rose and Finn – It is through these characters that we get to see another face of the Resistance and why they fight. Finn is originally a part because of his friends and is even willing to leave in order to protect Rey but Rose reminds him of the bigger picture and that at the core they exist to fight oppression. It is handled on the casino world and seeing their friendship bloom was one of the more memorable parts of this film.

Master Luke Skywalker – Luke is done with everything. Like before in the Original Trilogy guilt defines him and it is mistake that helped lead to Kylo Ren’s creation and that guilt is something he carries with him and resists until the end. He is wanting to destroy the Jedi order and die as the last Jedi until Rey helps him realize there is so much more that he’s forgotten and that he can still make a difference and change things. Mark Hamill is fantastic.

General Leia Organa – I miss Carrie Fisher. It was great seeing her in this, her whole drive is survival and protecting the Resistance from the First Order. She is the mentor who is there to remind the young folks there is a time and place for glory but you have to work to keep everyone alive, or there won’t be anyone else left to fight. This was my favorite presentation of her besides “Empire Strikes Back” and I’ll miss her in these films, now that she’s gone.

Rey and Kylo Ren – One of the core relationships is that between Kylo and Rey both of who are alone and seeking more beyond the old order as so much of who they were was tied to the legends of the past. They are connected but still adversaries and it is great relationship to see explored as Ren becomes more confident and much more of a bully and Rey finds an identity outside of her parents and her expectations of Luke and the Jedi.

Subverting Expectations – If you go in expecting “The Empire Strikes Back” or another version of “Return of the Jedi” or “A New Hope” prepare to be surprised. This is a film where most things don’t work out for any characters. Things change, both in the First Order and the Resistance in regards to their identities…but it doesn’t repeat the cycle. We get away from The Ring Cycle a bit here and from that “Star Wars” seems to finally be developing it’s own identity outside of the past. We also see The Force not being tied to bloodlines and the fantasy feel of the past films and midichlorians are implied to no longer be a factor (Rey’s background and the last scene of the film). I loved that, this is no longer the Skywalker show, Star Wars has to be bigger than one family drama and I can’t wait to see where the series goes.

Everybody Loses – Poe finds out he was wrong, Rose and Finn get betrayed, Rey isn’t able to turn Kylo Ren and even the Resistance only barely survives. The First Order isn’t in great shape either after the events that take place and it is going to be transforming further or it will collapse. That is powerful and with it we see the most potential for change both within the Resistance and the First Order. They’ve lost too much to remain static.

Okay: Welcome to the Casino / Side Quest – This first point is related to the second point, there is a side plot on a casino world in order for Rose and Finn to get a code breaker in order to break onto Snokes’s ship so that they shutdown the Empire’s ability to track the Resistance’s fleet. It explores the meaning of the Resistance so I’m not putting it as a total negative but it could have been shorter and achieved the same purpose in the plot, and I would have traded a few Finn and Rose scenes for more scenes with the codebreaker played by Del Toro named DJ. He is fun.

Structure and Clutter – The greatest issue with this film for me was the structure and how cluttered some of the different plots are. It wasn’t bad, I saw this film twice but it does feel long during some of the side tangents. The overall story and themes greatly overwhelm this in quality though and it didn’t take away from my enjoyment of the film.

This is probably going to be in my Top 5 films at the end of the year. This is a film I’ve watched twice and is easily the most fun I’ve had at a film this year since “Baby Driver.” I can’t wait to see where things go after this film as it upsets so much of the status quo. I am a guy who loves the original Extended Universe and I always will, but I’m glad they didn’t repeat it (and I still enjoy it as another timeline of Star Wars). By the time of “The Force Awakens” I was done with the Skywalker drama, predictability will kill this franchise as so many of the problems that plagued the Prequels was the lazy recycling of the Original Trilogy. This film is strange, different, takes chances and changes things and honestly, it is the only way Star Wars can grow beyond the corner it was written in to. Here is to Disney embracing that change and giving us more great stories like this film.