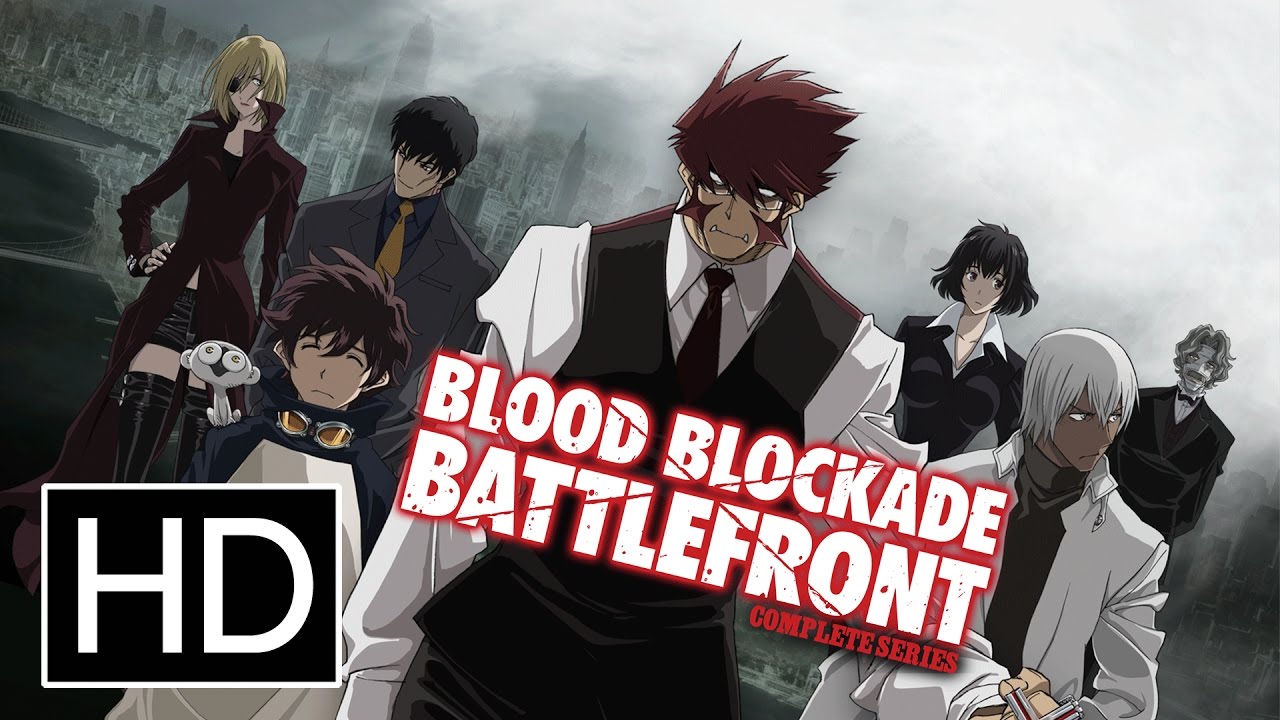 If you like animes with a mystery and an emotional payoff, chances are you will enjoy “Blood Blockade Battlefront.” This is an anime that keeps the stakes up the entire time will still keeping the anime tropes of craziness and super team. I would have watched this anime just for the team, and I’m glad it got a continuation in “Blood Blockade Battlefront and Beyond” which I plan on also reviewing at some point. This is an anime with consequences where there are no easy outs and I loved that the ending had consequences. I’ll get into more of what I mean later on but for non-spoiler thoughts, I definitely recommend this series.

The series was directed by  Rie Matsumoto and written by Kazunao Furuya.

The story involves Leonardo Watch and his interactions with the secret crime fighting organization “Libra,” who work in Hellsalem’s Lot, the place that was once New York City but after a supernatural event, the city and people are changed forever as beings from other worlds now call the city home.

The Pros: Hellsalem’s Lot – The incident that lead to Hellsalem’s Lot nearly destroyed NYC and it was the children of two Enchanters making a deal with higher beings that stopped the fall. This tone never leaves this world. Everything is dangerous and many people have magic now or are facing beings that alien to them. Humans are in fear mode as are many of the other humanoid beings. This gives the reason for Libra’s existence and Leonardo Watch’s ability to see the true name or nature of things with the “Eyes of God” (which he got from the incident) which complicate things further. This is a world of danger, but it never stops being fun.

The Members of Libra – I like all the members who have been explored, outside of Zapp (who continues to remain annoying even after his character arc) and Steven who is the second-in-command but whose motivations we never really get. He’s powerful but through this series is largely an enigma.

K.K. – K.K. is a minor character but she has more personality than a lot of the characters and never stops being fun. She is introduced as a gifted civilian with no special gifts (think Hawkeye in “The Avengers,” but is a lot more fun as she is much more cynical and it adds a lot.

Deldro Brody and Dog Hummer – I like this character out of the situation of their creation. A man connected to another being who is mad is wonderful. They have to work together and I love their dichotomy. It isn’t something you tend to see everyday, even in anime and fantasy as a whole.

Zed – The Blood Battle God drops Zed off after he and Zapp are forced to work together. Zed is great he is Spocklike but also more savvy and I like how he generally cares. This is a character who is noble and doesn’t put up with Zapp’s crap while also being super gifted in what he does. I would watch an episode just about him and his life as a merman.

Klaus – Klaus is the best part of Libre, he is distant but caring and he also shows that he sees the bigger picture. He is the one holding off Black until Leonardo can bring back White and help Black find the humanity he had before…and no longer be The King of Despair who inhabits him. Klaus is another character who I would watch a mini-series on. He is the most compelling member of Libra and the ideal Paladin character type. Also his Wolf-life character design adds a haunting tone to all he does.

The Kind of Despair and Finding a Reason to Live a Story of Black and White -The main arc is balance and finding a a reason to live and not destroy. Leonardo makes friends with White who is only held alive by Black (another friend) making a deal with the devil. It is only his letting go and becoming part of the protective barrier that saves Hellsalem’s Lot.

Complex Chaos, Femt Not Being All Bad – Femt is the first baddy we meet as he loves chaos, but even when he meets the Lord of Despair…he helps Leonardo whose whole point is to save the world. This was brilliant and I enjoyed the complexity. I wonder what he’ll do in “Beyond” but he is still a baddy and I have a feeling he wants existence and that is what brings fun. Regardless, it is great not to see that mindset in someone who isn’t like the Joker fully.

Okay: The Arc of the Show – The Black and White Arc and Black learning to let go and care could have been done better. The characters mentioned above could have helped with that whether I felt they were explored well or not having more people connected to Black or White could have helped the story. It was still enjoyable and worked but I’m not going to discount what took me out of the story, which was the arc.

This is a show that excels because of relationship and character. I can’t recommend overall arc simply because it needed more setup, but the characters make it worth it. This is a show I highly recommend and I can’t wait to watch the sequel series. These are characters I want to learn more about. I appreciate a series that can make the point without becoming overly long…and this one did it. If you are okay putting up with a main character who isn’t the best…stick around for his character payoff by the end of the season. Worth it for how it explores the characters and world.