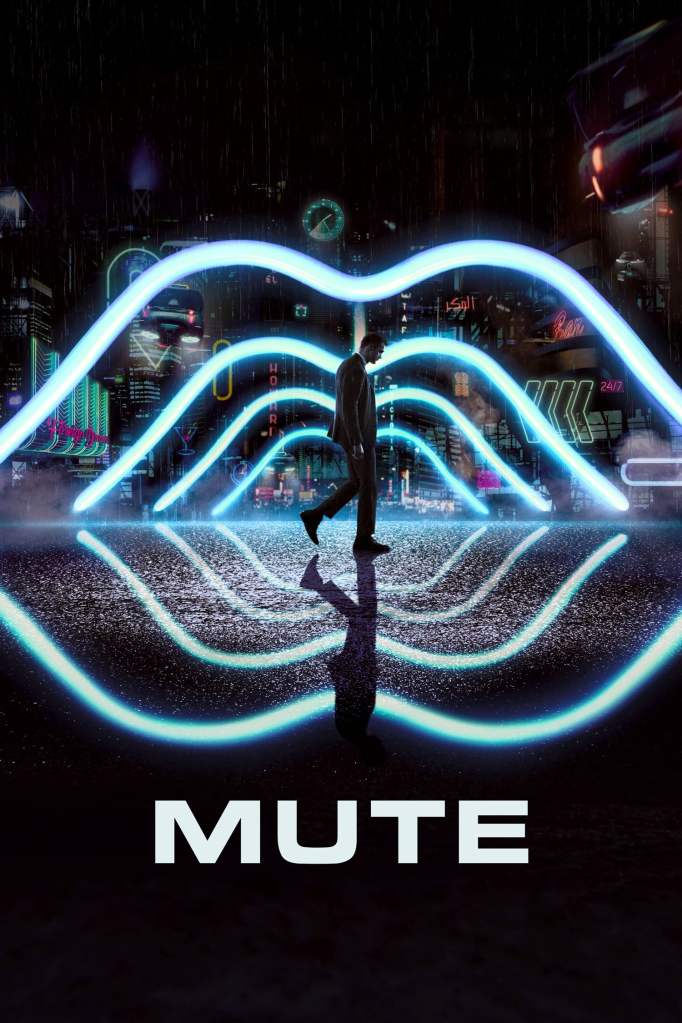 Netflix is the new Blockbuster in more ways than one. Any place where you have a concentration of films you have copycats and crap ripping off much better films. “Mute” is a film that rips from the world of “Blade Runner,” but doesn’t have anything to say on its own. This film was awful, and one of the most disappointing films I’ve seen in a while.

The film was directed and co-written by Duncan Jones (the director behind the “Warcraft” film) and Michael Robert Johnson.

The story follows Leo, an Amish immigrant to Germany, who has lost his vocal cords after an accident. When his girlfriend, Naadirah, goes missing he investigates her hidden life as the dark underbelly of dystopian Berlin is revealed.

The Cinematography – This is a beautiful looking film. The neon colors and the future tech are great. The neon lights bring out the dark mystery of the environment and how shady most of the people in this world are. Gary Shaw, cinematographer, is the only person who truly did well with this film as the film’s cinematography is one of the few things about the film that works.

The Idea of the Story – I am a fan of noirs and mysteries and this is both of those things, as well as Sci-Fi. Like “Blade Runner,” we are learning about this broken world and how each person relates to one another as the mystery of Naadirah’s disappearance is slowly revealed. That is the idea anyway, nothing else works.

The Characters – The characters are all terrible people. Even Leo is shown to be as dark as those around him as he is willing to do anything to others ,and only cares about his girlfriend and that is it. Naadirah is manipulative and using those around her. And the antagonist, Cactus, and his friend, Duck, are creeps who don’t have arcs. They just exist as a threat to Leo, as they are doctors for the mob and Cactus killed Naadirah.

The Story – The story is crap. How Leo discovers each bit of the puzzle and how deep Naadirah was in with the gangs is a muddled mess. What story is here involves Cactus trying to escape with his daughter as he keeps having to do more jobs for the mob, and Leo gets closer to finding out that he is the killer. It sucks and the fact that Leo adopts Cactus’s daughter as his own after killing him has no real lead-up or payoff. However, Cactus and his friend give Leo vocal cords so he can speak, so that is a thing… I guess. It just happens. God I hated this story.

This is the worst film I’ve seen this year, thus far. It is a film that failed to develop characters, and unlike “Blade Runner,” had no deeper point. It took a cool idea of a mute protagonist and wasted it. What made hate this movie more than I usually would was the world is presented beautifully and I am a fan of Sci-Fi Noirs. I was ready to explore this world and find interesting characters. In the end I learned nothing about the world and the characters were some of the worst written in film.

Final Score: 3 / 10 Nothing worked except the cinematography.