“Love, Death & Robots” is an amazing Sci. Fi. Anthology show on Netflix. It is original and the basic concept is original and adapted science fiction short stories are done by different animators and often times adapted from stories from known sci. fi. writers. It is a beautiful anthology and tackles a lot of the popular concepts of time, personhood, self, identity, meaning, etc. that the best sci. fi. stories cover. The series overall is great, with 18 total episodes. There were some okay and good episodes too, which was why I chose this format. The great stories stand out and are the ones I want to talk about. If you are a fan of science fiction and fantasy or great animation, this is a Netflix original show, well worth your time.

The series was created by Tim Miller, with himself, Joshua Doden, David Fincher and Jennifer Miller as producers.

In my episode reviews I will attributing the author who inspired each story if there is one. This is partially because I want to go back and read the stories, especially since I know some of these folks from other works and want to give them credit for inspiring such an amazing show. I also won’t be giving scores this time around. Each of these stories are worlds I’d like to return to, and I feel like I can’t judge a short story in this case, the way I’d judge a movie or a full episode of a show. I also can’t wait to read them.

SPOILERS ahead. I’ll try not to give away too much, but sometimes I will have to mention what makes the story work, which in short stories is often the reveal, which is what these are. 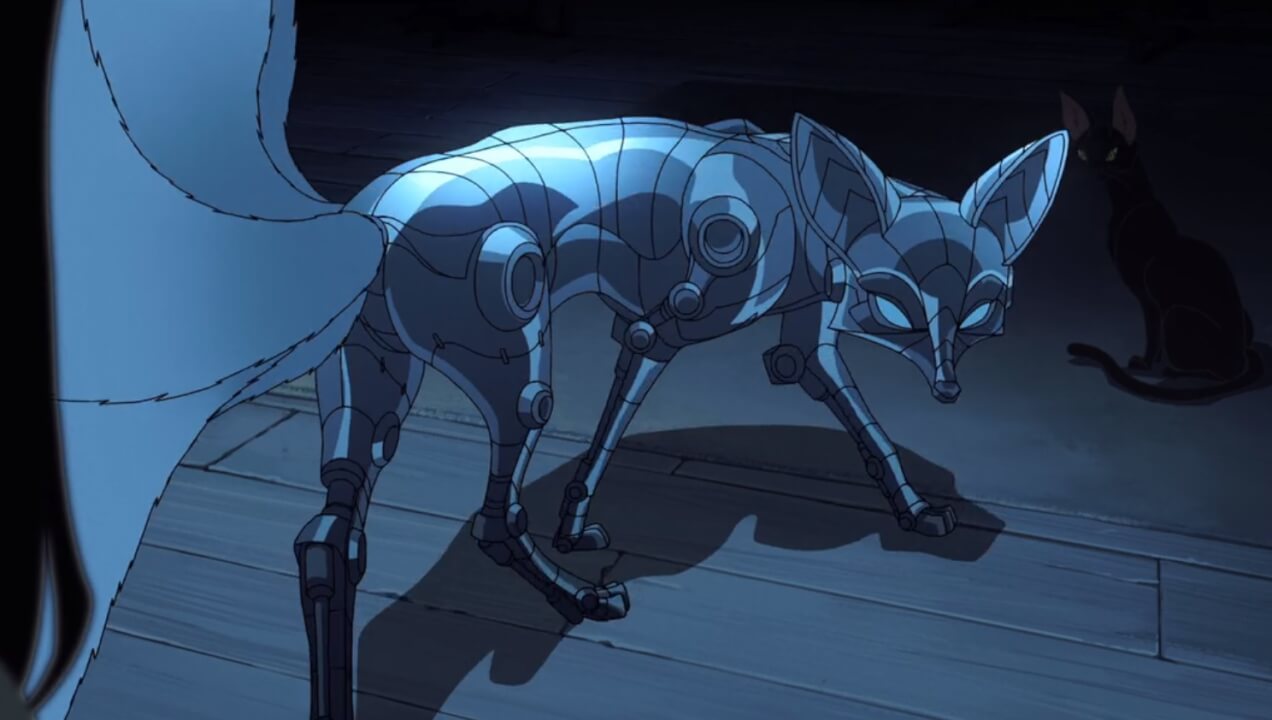 Episode 8, based on story by Ken Liu.

“Good Hunting” is a sad, beautiful and intriguing story that also has a sense of justice in the end. It takes place in an alternate universe where Britain conquers and turns China into a steampunk Colony. The animation is like a painting or a classic anime and I wanted to be more in this world, simply from the animation alone. It really sets the scene of China, really well. Before all this the main story involves a boy who hunts shapeshifters with his father and saves the daughter of the shapeshifter his father is hunting. They become friends and he becomes an engineer and she becomes a prostitute in the conquered China under British Rule. Both of them experience change in who they are and they talk about it together. They weren’t who they were as kids and colonization has changed not just the country but each of them. It has built the son up in regards to his engineering even though he is broken and she is torn apart. Thankfully justice happens, but so much pain happens inbetween. This is a sorrowful story, where the only bright light is the friendship between the son and the shapeshifter’s daughter. I loved it though, this story has things to stay against Imperialism, sexism and the nature of self. I can’t wait to read more of Ken Liu’s work as I loved his translation of the novel “The Three Body Problem,” by Liu Cixin. This story has that same kind of depth, which is why it made my Top 5 of the season, beyond the tragic compelling characters.

“The Witness” was written by it’s director Alberto Mielgo and this was a story that grew on me the more I thought about it. The basic premise is two individuals caught in a time loop. Whenever one kills the other, the cycle starts over again. The dreamlike nature portrayed in the colors in the art contributes to the experience. This feels like the mixture between reality and a dream, which contributes to the point of the story. It is hard to talk about it without spoiling it because the whole premise is what makes it compelling beyond the “Blade Runner” inspired world. I could have easily spent more time here. We never get to know the characters beyond the desperation, but they are characters born out of their environment. The constant rush and tension is illustrated in the events that happen in the loop and it was impossible to pull away. I’d really like to see what else Mielgo is capable of writing. This was a great start and his world is full of untapped potential for future tales. 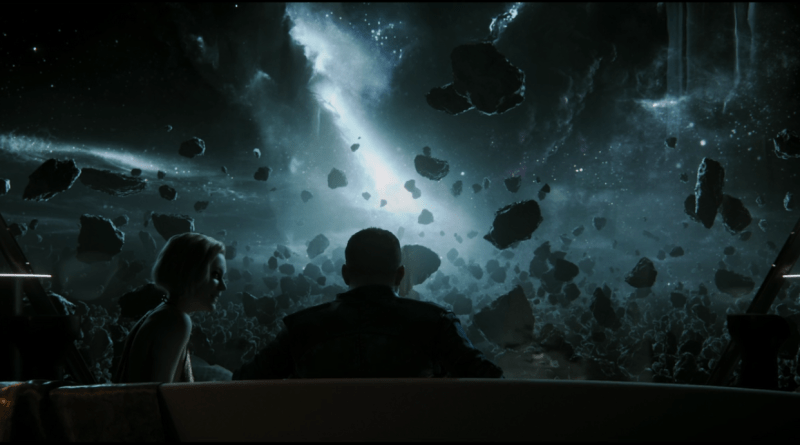 3rd) “Beyond the Aquila Rift”

Episode 7, based on story by Alastair Reynolds.

“Beyond the Aquila Rift” was a story that almost scored lower because it repeats a song it plays in the middle of the episode. This made it feel like a musical to me, but the basic premise won in the end, especially when coupled with the almost real animation. What does it mean for an alien to care for another completely alien to it? This basic premise defines the relationship between our protagonist and the form the alien takes as a past lover to relate to him and to give him happiness, as he is in a place he cannot return from. What sold it for me, beyond this basic premise is how the reality of where he is looks like a hellscape. The tone here completely changes and suddenly the aliens good intentions don’t feel so benign, especially since one of the crew members once awakened sees past the illusion of her form. We never know her or it’s intentions though. That is why this works so well. He could be in bliss as she feeds off him to trap more people (she also looks like a spider in her true form, which adds to this) but they might have really gotten lost and truly can’t back, in which case it is giving empathy and caring in the only way it knows how and it easing suffering. This complexity is truly why this story works in the end. 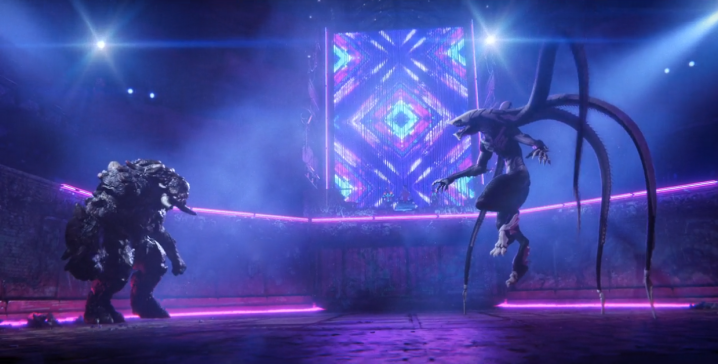 Episode 1, based on story by Peter F. Hamilton.

“Sonnie’s Edge” is a story that is all about the twist, but it is a really good one. This takes place in a world where humans control monsters to fight each other and from it win money and fame. When Sonnie is asked to throw the game, she refuses leading to them targeting her. In the end they succeed when she takes a liking to the lover of the man who wants them to throw the game. What they don’t realize is (and I’m not sure if her crew know it or not, since we are never shown) is that Sonnie is really the monster. She is the beast in the pits always fighting for her life and the human is just her robot avatar. For me the questions that it sparked were the intelligence of the monsters (given she manipulated things to win in the end) and what that means for others like her. A lot could happen in this world, especially since at least her species is capable of controlling A.I. and making friends with humans. All this leads to her getting revenge against the people who wanted to kill her (they kill her robot avatar) and her implied escape. It is beautifully done and the reveal is perfect. The designs of the monsters are also worth commenting on. They look like Kaiju from “Pacific Rim” and it gives them a distinct character and threat. 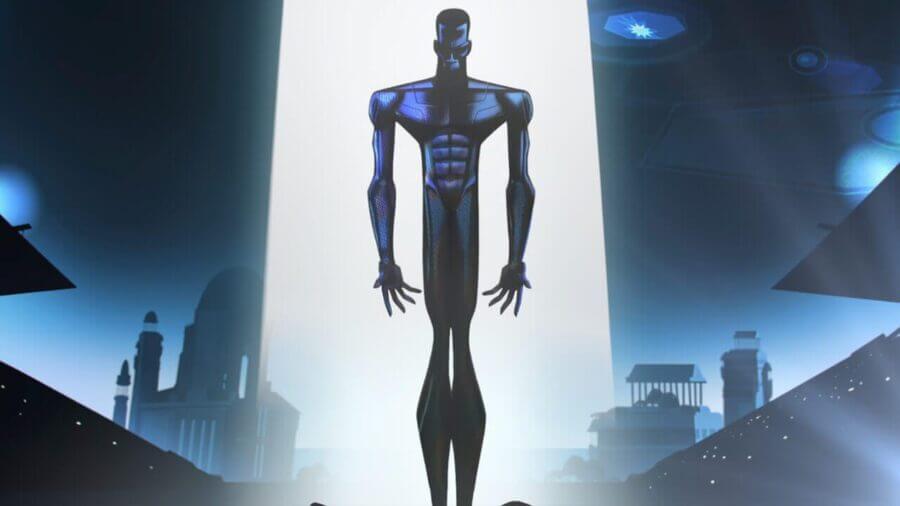 Episode 14, based on story by Alastair Reynolds.

What is the purpose of life? What is meaning? This is the core question that this story asks as we learn about Zima through the eyes of a journalist. It is in this episode he tells his story as we learn he was once an early A.I. who ever countless years developed intelligence leading to him becoming the greatest artist in the world. it is fascinating how the reveal happens as the A.I. is risking everything for purpose and meaning. The final twist is a gut punch in that it wants to return to it’s original purpose in the end. The original robot was made for cleaning a pool and the symbol of the blue that kept popping up in the complex art of the universe was this robot only find peace in the simple desire to clean the pool and tiles to look like that color. As someone who loves philosophy and finds the importance of living to be a prime question, this episode is sci. fi. at it’s best. It takes that question beyond survival, love or horror (which many of the stories have above) and breaking it down to it’s base parts. Which in this instance is an immortal person with so much knowledge, returning to the basic knowledge of cleaning a pool. It is profound and it supposed to make you question. Beyond that the art is like Zima’s paintings and and fits the narrative so well. I’m looking forward to checking out Reynolds’s work. He is on this list twice and this story is truly a magnum opus.

I’m going to say it one last time. If you are a sci. fi. fan, check out “Love, Death & Robots.” It is easily one of the best things on Netflix right now and I really hope it gets renewed, so we can see more stories brought to life.