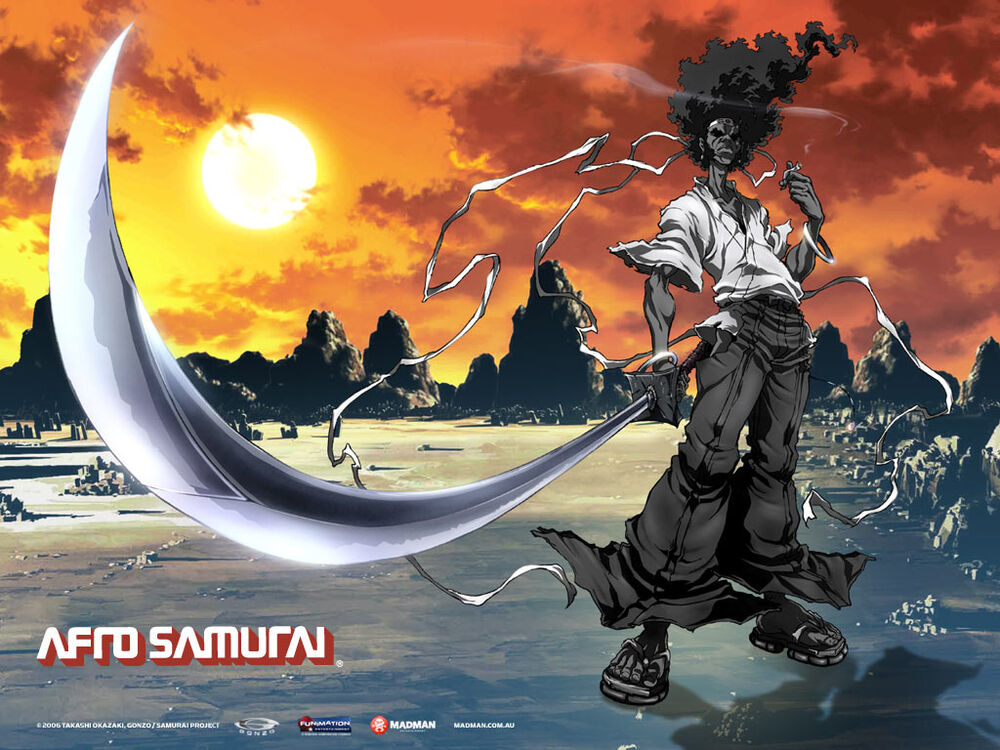 “Afro Samurai” is a glorious revenge drama that shows why revenge dramas are empty. Samuel L. Jackson is wonderful as Afro and Ninja Ninja and this is the kind of show that you need to give yourself time with. For what would be a mini-series, this feels long, which is a con. It also is great for what it is. This is the kind of series that does the deep dive into revenge and Afro is explored fully as a character. For the flaws I’ll explore, this is a film that is truly great but the flaws stuck out.

The anime was born out a collaboration between Samuel L. Jackson, Takashi Okazaki and Gonzo, with a music score by hip hop artist The RZA from the rap group the Wu-Tang Clan.

The story follows Afro, seeking the Number 1 headband after Justice kills his father and challenges him to come and get it as anyone who holds the Headband is like a God. We see the consequences of this quest as we flashback to his life as a child coming into his own as Afro with the Number 2 headband and his reuniting with old friends on his path to get revenge against Justice.

The Animation – The animation is the style I enjoy. We are talking about long and detailed expressions of the weapons and the wielder. This series caught all of that for me. This is also gory, if I were to make a comparison it feels very Tarantino. This is a revenge film and we see the cost of revenge in blood. For me this worked as this is something that hurts the hero, this should cost their soul, and we see that with Afro. The animation captures that as well as the intelligence and survival of Afro as he fights to be Number 1 and the body count he leaves to get there.

The World – The Headband Wars are fascinating especially as we see a mixture of powerful guns, swords and robots all in the same world. I wanted to spend more time in this world as it looks Apocalyptic but Afro’s quest gives us a limited view of it beyond those defending Justice and those tied to Afro. All of these are overall fascinating characters, which I will get into later. This is one reason I really enjoyed this anime. This is a rich world where I wanted more time with the everyday people living in it. Not just the heroes and villains.

The Characters – The characters aren’t perfect, but the ones I mention get explored to the point that I wanted to see more of where they were and this series delivers on this. The order is going to be a little strange but I did it based on who I found most compelling in the end one of the one characters is directly tied to who another character is. Sadly the women in this series aren’t explored well at all, which for me did hurt the overall experience.

Justice – This is a classic anime villain in that he is seeking Godhood at any price. He is also not traditionally human as he has a third arm that is revealed in the finale battle. I liked him as an antagonist as he reminded me of “The Man in Black” from the Dark Tower series. We have this insidious being who is only seeking domination over others and destroys so many good people Afro knew to get there. The final fight is powerful and the Number 1 headband is something I did not expect Afro to get, given the tone of the anime. I was ready for tragedy, and it still is but not in the world ending “Neon Genesis Evangelion” kind of way. It is tragic in that the price of revenge is you lose yourself and all those you knew and this series does that extremely well.

Kuma – Kuma is Afro’s former friend who joins the organization that is trying to kill Afro. Kuma only has his rage at the loss of the Dojo, his Master (when Afro killed him) and his body as he is now nearly more machine than man. He is compelling character and his pain drives him. He is defeated by Kubo but returns once more, somehow surviving his near death to challenge Afro once more. His story is tragic and he has become who Afro was before, a character who can only find peace in death.

Afro – Afro is the stoic warrior. He only exists to bring justice to Justice and his story in this film is him facing the past and losing what connection he has to his emotions and self as he creates a imaginary friend Ninja Ninja who exists as his true feelings and fears. The character he became after his father’s death doesn’t have room for those emotions so keeps them away. Everything is about revenge and revenge is business. Samuel L. Jackson doesn’t speak much in this role but he plays off the expressiveness of Ninja Ninja (also voiced by Samuel L. Jackson).

Ninja Ninja – Ninja Ninja is all of Afro’s passion and fear and he gives so much to what makes Afro interesting. He is the way that Afro is still child-like as Ninja is all about survival and escape but he still sticks around because he cares about Afro and finds the fights interesting. Their dynamic is fascinating and when Ninja Ninja sacrifices himself to save Afro from Kuma it hurts because you know at that point all Afro has now is the fight and revenge.

At Times Overlong Action – The action is beautifully animated but at times it goes on way too long. This was fine but when nearly every fight starts going on a bit longer than it has to be it becomes a con. This was what happened here. I wanted more character moments versus fights. The dialogue that the series has, and they usually comes with flashbacks enriches the narrative. I wanted more of that because there wasn’t enough exploration of some characters. The series was later adapted into a videogame and given Afro fighting mini-bosses on his way to the final fight with Justice it works, and might work better that way.

The Role of Women – Women in this anime exist as victims and it is more the sexism you tend to see in anime. Afro’s old friend and at this point maybe lover who betrays him when she meets him (Okiku / Otsuru) later just to be killed by the ones using her in the first place is the one woman with a name. The most complex woman in the entire film is the bartender since she isn’t being victimized. I wanted to see more with her and Afro as she clearly knows his game and has seen some fights go down.

This is definitely an amazing anime. I wish that the action had been shorter and more time had been spent to develop Afro’s past friend Kokiku because we never get enough development in contrast to Kuma where we get his hatred and why he wants to end Afro. I would have cut all of the fights in half to have develop Okiku further as well as Afro’s past between his time at the Dojo and becoming an adult. It would have fleshed out the world more and developed Afro and his former friends more as characters. Either way, still a favorite anime if you are down for a classic revenge anime. Definitively a favorite.