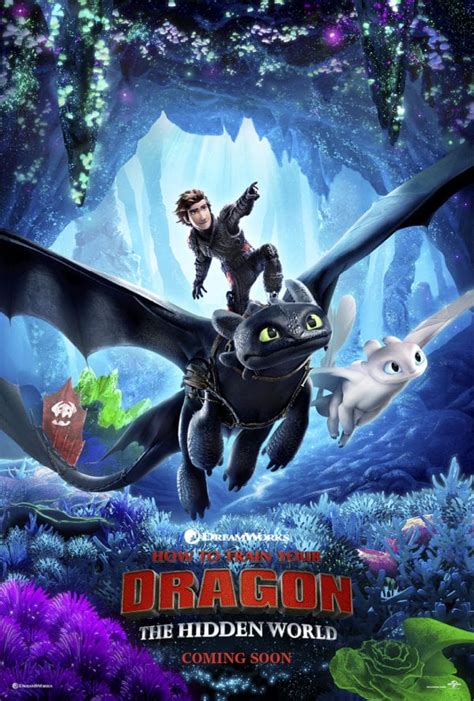 “How to Train Your Dragon: The Hidden World” is a really good film. It isn’t as good as the first 2 films, but this is a solid end to the franchise. If you’ve come this far I’d say it is worth finishing. The ending is one of the most heart touching things you’ll see this year and the animation and action are the best this series has ever been. Also I am biased in that I am glad this is the ending.  A trilogy is a a great way to end any series and when you go beyond that it is easy for studios to mess up.

The film was directed, produced and written by Dean DeBlois, with Brad Lewis being the other producer.

The story involves Hiccup and his dragon-riders continuing to rescue dragons and bringing them to Berk. This leads to overcrowding leading Hiccup to call upon his dad’s dream of finding the “Hidden World” where dragons and humans can live and peace. All doesn’t go according to plan when an old dragon hunter enters the scene. Grimmel who hunted the Night Fury to near extinction. With the warlords at his back he brings war to Hiccup and Berk.

The Action – The action in this film is great. Grimmel (the main baddy) and his Deathgrippers (venom-fire spitting dragons) cause some great action sequences when they are escaping, capturing dragons or fighting against Hiccup. Visually the action sequences are a lot of fun. The fact that Hiccup and his main crew now use dragon armor and Hiccup has a burning swords adds to the visual appeal of it all.

The Animation – The animation is the best it is has ever been. It must have been difficult to animate the Hidden World when they finally reach it. There are such a variety of dragons and mirage of colors that it simply draws you in. Same goes for when Hiccup moves the Vikings to find a new land. The sheer amount of characters and creatures in motion is seamless, as well as the reveal of the new forest island they choose to call home. This is a movie animated on an epic scale and it loves it up to that. Every scene has so much detail to it, while still focusing in on the characters who drive the action.

Astrid and Hiccup – This is the core relationship that drives the series. Astrid and Hiccup are the heroes of the film. Astrid is the one who sees the big picture and sees the people, while everything Hiccup does is to protect the dragons. It is a wonderful dynamic and we see how they compliment one another. Hiccup is the idealist while Astrid is much more down to earth. I do wish Astrid had got more development as so much of her development is tied to Hiccup as chief, but it still shows they are partners. This is really them growing as leaders and in regards to Hiccup, him accepting that the dragons should be free and not domesticated.

The Ending – The ending is a reunion of friends. Astrid and Hiccup take their kids to the Hidden World where the dragons are living and meet the Light Fury and Toothless’s babies. It is really sweet and for any fan of the series you will feel. This gave the series a sense of finality too, which “Kung Fu Panda 3” didn’t give in the same way. This was smart and if the studio does go greedy, they’ll have to be really smart to give this trilogy a worthy epilogue.

Grimmel the Grisley – F. Murray Abraham is good at giving us a threatening feeling character in Grimmel. His introduction is killing a dragon without reacting and escaping Burk, even with it being full of dragons. He also has the Light Fury that he uses to bait Toothless, which is clever. Traps are his game and they could have been used so much more. He has a trap that nearly works that should have killed at least one of the characters (Hiccup’s dad was killed last film, raise the stakes). But in the end it doesn’t work. This doesn’t help as from here on in he never feels like a threat. Our heroes beat him without their dragons after Grimmel takes control of them when he captures Toothless, and though we are given good visuals it is nothing more. He needed to truly hurt our heroes or have a real personal reason we saw to want to end all dragons. We don’t get either, which makes him the weakest enemy in the Trilogy. Still a decent villain but he deserved so much more lore and development.

The Villain Warlords – There are 4 warlords who clearly have different looking armor so should have had differing personalities and goals, but they don’t. Instead we have 4 people who hate Berk, want to kill dragons but not use them in anyway we ever see (resources, etc.) and are all just stupid fighters. The only thing that sets them apart is their armor sets and the fact that 3 are men and 1 is a woman. This isn’t good. They should have been in a more adversarial relationship against Grimmel (or split between them in loyalties) or at least have different expressed goals at what they’d do with the killed dragons. They served no purpose beyond paying Grimmel to take on Berk. David Tennant voiced one of the warlords, and I couldn’t even tell. He’s one of my favorite actors so it was such a horrible use of such great talent.

If you’ve come this far, you deserve to finish. The film itself is solidly good with a great ending and it does give a bit more lore. Where it fails is in the minor characters, which is a shame is that is the only thing keeping the film from greatness. I wanted more time with Hiccup’s mom Valka and his Uncle, or any of the Warlords. They deserved better development. I would still recommend to any who love the series and great animation. This film knows that this is the end and it goes all in on the operatic fights and the core relationships. This is a film that knows how to say good-bye.