“The Dæmons” is an amazing 3rd Doctor story. This a story that goes into the lore that makes up the show, gives us a great standoff against a classic foe and has something important to say about the nature of power. This is a story that has five 24 minute parts but it feels like much less. The flow and tension of the story is beautifully handled and there are fantastic rising action with great antagonists and some wonderful exploration of our heroes. This story is quality “Classic Doctor Who,” and one I definitely recommend.

“The Dæmons” was directed by Christopher Barry and written by “Guy Leopold” the pseudonym for Barry Letts and Robert Sloman.

The story involves the Doctor (Jon Pertwee) and Jo (Katy Manning) attempting to stop a cult that seeks to awaken an ancient power beneath an English Church, while attempting to connect with U.N.I.T. for aid as the Doctor comes to face an old foe.

Tension and Story Structure – “The Dæmons” is a 5 part story that does a great job at establishing the threat, building up the standoff and having stakes and growth throughout the entire episode. This episode is great. The Doctor needs to be saved early on by Jo and U.N.I.T. The Brigadier needs to arrive with reinforcements to help against the Cult and get past the heat wall and the Cult’s actions and infiltration have to be dealt with by our local heroes, Jo and the Doctor. The action builds beautifully and the payoff is fantastic and fits with the theme of power that is weaved through the episode.

The Master and his Cult – The Master and his Cult are such fun villains. The Cult controls the local village and has people in all levels of power. The Master for example is the local leader of the church and we see cult members pop up in local government and around U.N.I.T. This keeps the tension high as the Master is winning through most of the episodes and it isn’t until Brigadier with the full force of U.N.I.T. and Jo’s sacrifice against Azal that he finally finds all his plans turn to ash and himself captured by U.N.I.T.

Azal – Azal is a powerful alien and last of species the Dæmons a powerful alien species who have been experimenting on humanity through history. It is from this that we get a force that doesn’t even care about the Time Lords beyond how he can use them to control or use Earth. He doesn’t show up that often but when he does you get why he is the big bad of the episode.

Brigadier and U.N.I.T. – Brigadier is fantastic and him coming to help against the Cult is a major plot point. For much of the episode we follow soldiers under his control as they seek to get him to the scene of the action. When he finally arrives it is a great show as we see U.N.I.T. in action against a gargoyle and and the Master’s cult. I love how Brigadier hates being under the Doctor’s control but listens anyway. It gives a great dynamic as he is the only one who understands he needs to follow what the Doctor is doing, but doesn’t have to like it.

Jo Grant – Jo is very much the Watson to the Doctor’s Sherlock. He even references this point at one point. This is a relationship where she is learning through the entire episode and her pure goodness is what saves the day in the end. Because she isn’t detached like the Doctor she is able to care about others on a way the Doctor won’t let himself do. We never see the Doctor sacrifice himself through the series in the way Jo does here. Unthinking she jumps against a killing blow that Azal sets against the Doctor, which in turn saves the day.

The Third Doctor – Jon Pertwee is such a great actor, and one of my favorite Doctors. This gave him a story worthy of his talents as we got to see him investigate, be vulnerable and own his role as the protagonist facing an old foe and forces more powerful than him. At one point he references Sherlock Holmes and he is perfect in that role as his Doctor has many aspects of his character. Pertwee’s Doctor is detached from people even as he desires to help them. This episode is powerful because it is an episode where he comes to better understand empathy and love and it is quite beautiful.

True Power – The main drive for many this episode is power. The Master wants it destroy the world, the Doctor doesn’t want it and Azal wants to bestow it to destroy his enemies. In the end the one who saves the day is Jo. She willingly sacrifices herself which reverses the power and saves all of their lives, causing Azal’s destruction and the capture of the Master by U.N.I.T. It is cliche but I still appreciate how love was the true power all along. It was Jo’s love of the Doctor that defeated the last of a powerful alien species set upon destruction.

The Witch – The witch is an okay character. She’s introduced early and she does save a U.N.I.T. Captain from a cultist, but she also doesn’t do much beyond that. She along for the Doctor’s story once she shows up and I wish we’d had more of her facing off against the cult and the church. This was a character full of potential, who was still acted well but got forgotten by the end.

This is a great episode and an episode that shows why Jon Perwee is one of my favorite Doctors. In this we get his detachment, investigative skills, his fighting ability and all his caring. In the end this episode has him grow in his caring and shows just how wonderful Jo is as a companion. She is his Watson to his Sherlock. Seeing Brigadier and the Master using their minds and forces to the fullest also makes for a intriguing face-off that payoffs in a well earned victory for our heroes. For any fan of “Classic Doctor Who,” this is one that I highly recommend. 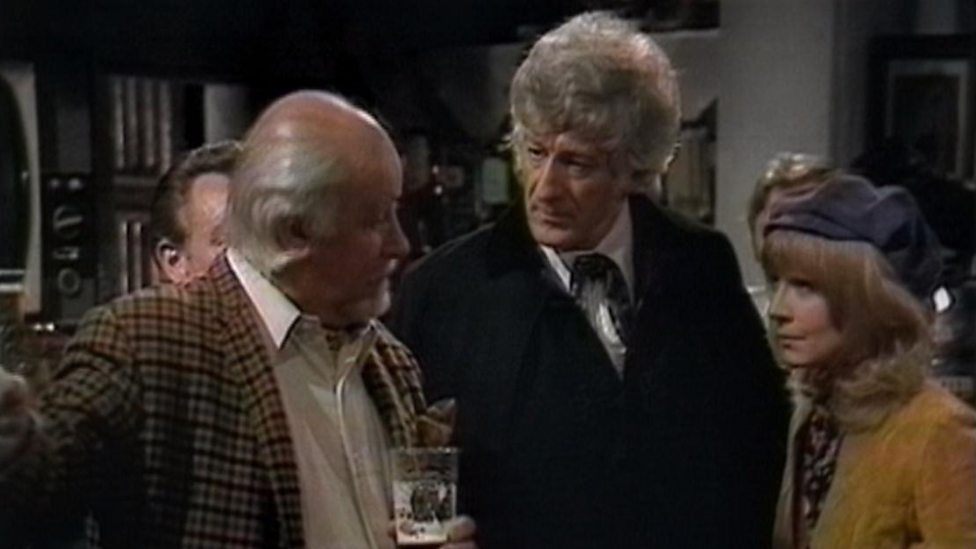