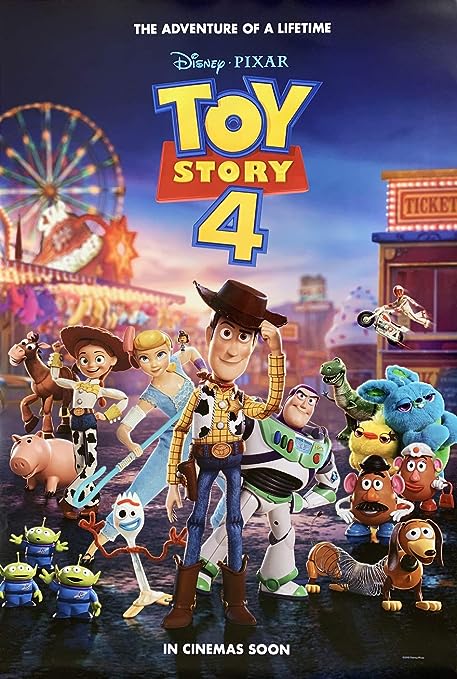 “Toy Story 4” was a great film that I didn’t think was probable. This was a series that had ended pretty definitively at the end of “Toy Story 3” so I wasn’t sure what else they were going to do. I’m happy to say I was surprised. This is a film that is powerful and explores identity, mortality, purpose. The main cast are the heart of the show and at this point it is easily one of my favorite films of the year. If you are a fan of Pixar, definitely check this one out.

The film was directed by Josh Cooley and written by Stephany Folsom and Andrew Stanton.

The story follows Woody and his friends on a road trip after Bonnie has created a new toy name Forky who believes himself to be trash. Woody mentors him but soon finds himself questioning what he’s known when he runs into Bo Peep who is a now a living the life of a “lost toy.”

The Animation – Pixar does such a great job building off each of their latest films. This is simply a stunningly animated movie that has more realistic looking people, the detail of fur on animals and tons of different surfaces that make-up the many toys. I hope Pixar continues to thrive and brings us more of this amazing art. Every few films introduce something new worth exploring. After this my wife and I went to the Pixar exhibit and got to see the science behind it first hand. If it is ever in your area, check it out.

The Characters – The strongest part of most Pixar films are the characters. This film is no exception. The support characters have the least to do so it is hard to call their story good but it is still fun. This film is truly about the new characters, Bo Peep and Woody.

Gabby Gabby – Gabby Gabby is the antagonist of the film. She is a doll who wants to be loved but thinks because her voice box is broken she will never be loved. Because of this she kidnaps Forky to get Woody’s voicebox. They clash through the film with her eventually winning in her aims to get the voice box, only to be tossed aside. She is is a complex antagonist in that you can see where her drive is coming from and that she doesn’t destroy others the way Stinky Pete, Sid or Lotso does in the original Trilogy. She comes around to love and respect Woody because of what he does for her and becomes friends with Forky. Christina Hendricks gives so much depth to this role and she is easily the best antagonist in any “Toy Story” film, and that is because she shows that there is more a broken toy can become. Her final act is leaving Woody and Bo to care for a lost girl at the carnival.

Bo Peep – Bo is a toy who has found independence in the lost toy life and is loving it. She spends her time helping other toys found enjoyement from being played and though she misses her toy family from before she lives what she has become. She has a role beyond being there for a kid and it is in this role that Woody is given the choice for his own future.

Forky – Forky is the toy Bonnie creates when she is alone at Kindergarten. It is a powerful moment and Forky is born with an existential crisis. For much of the film he is trying to return to the trash, since that was what he was made from. Woody is the one who convinces him that he has a purpose to live (as well as Gabby Gabby) and from here he accepts his place as Bonnie’s favorite toy. The process is devastating and his arc is like a newborn learning to think and reason. We’ve never witnessed the birth of sentience in a toy until this film within the “Toy Story Franchise.”

Woody – Woody’s arc this film is learning to find purpose beyond devotion to a kid. The beginning of this is when Bonnie no longer cares to play with him, which kicks things off and ends with the finding of Bo Peep and joining her with the carnival, knowing that there they can help other toys find kids. His arc is a gut punch though as it is after Buzz comes back to rescue him that he says good-bye and passes on his sheriff star to Jessie who had become the Sheriff for Bonnie when she played. It was neat and a great releasing of his ego on Woody’s part. Tom Hanks once again adds so many layers to this wonderful character.

Identity and Purpose – The main theme running through the story is that of identity and purpose. What this is for most toy’s is the devotion of a kid. This is what helps make Forky no longer seek death and is what drives Woody through the story up to this point. It isn’t until he meets Po that he sees that she is bringing joy to those who are lost or don’t have toys. Woody finds purpose in this and in his love for her. It is powerful and over the course of the film is set up really well. We get the flashback of when she leaves, Woody being left in the closet and the birth of Forky who Woody than mentors. This exploration of identity and purpose is really the core of the story and what makes it so great.

The Support Characters – The support characters are alright. Woody’s friends get some good comedy, but we never see them grow. Buzz, who has the most screen time among them is the same character at the beginning as he is at the end. The same goes for Jessie. She is still the same Jessie the film began with as she was always a leader. Key and Peele play a comedic duo Ducky and Bunny. There are others as well who work on a comedic level, but it is hard to call what they have arcs. For this reason the supporting cast is only okay.

This is a film I highly recommend. I can’t wait to go back and watch the original “Toy Story Trilogy” again and see just how far Pixar has come in their animation and really storytelling too. If you are a fan of the other films, chances are you won’t be disappointed by this one. So far it is easily one of my favorite films of the year and I can’t wait to see what else Pixar creates and the future stories they tell.