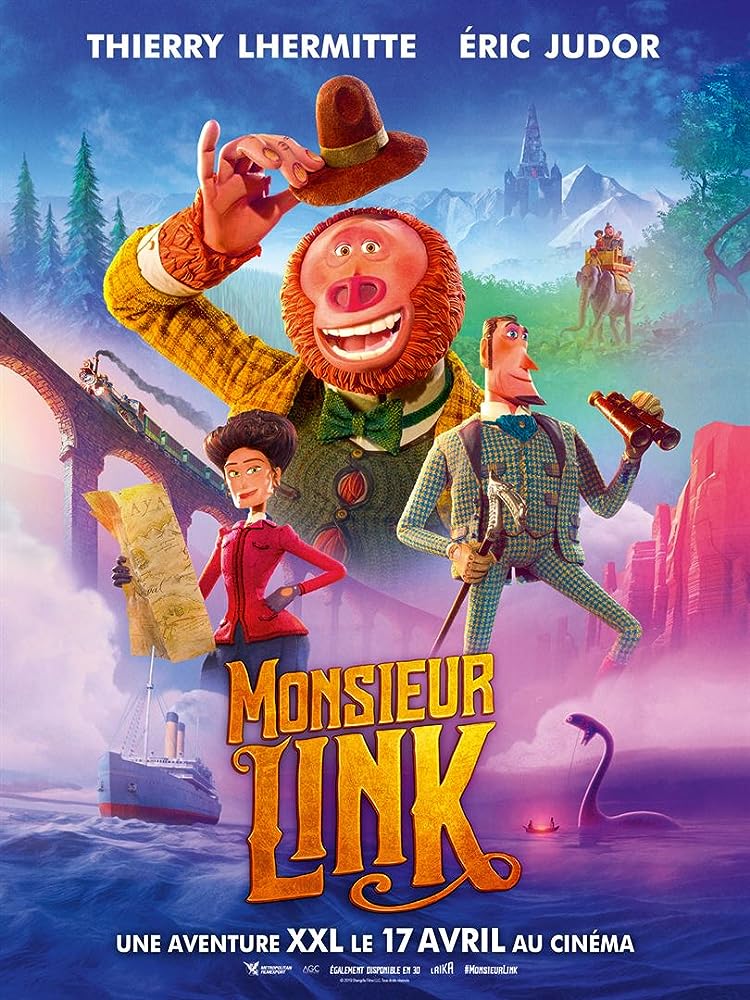 “Missing Link” is a film that could have been so much more. One thing Laika Studios is quite good at doing is taking a novel concept and going deeper with it. We see this with “Kubo and the Two Strings” which takes your basic adventure story and makes it about working through grief and exploring familial bonds. This story is bland. The strongest part of the film are Zoe Saldaña’s performance as Adelina Fortnight and Hugh Jackman as Sir Lionel Frost. The problem is they are fully inhabiting tropes that they never grow beyond. This was sad as this story deserved so much better.

The film was directed and written by Chris Butler.

The film follows Sir Lionel Frost (Hugh Jackman) who wants to join the “Society of Great Men,” who believes he finally has a chance to join the order when he receives a letter from the United States and meets Mr. Link (Zach Galifianakis) the Sasquatch. The leader of the “Society of Great Men” Lord Piggot-Dunceby (Stephen Fry) sends a hunter (Timothy Olaphant) to stop him as Frost must call upon a former friend Adelina (Zoe Saldaña) to get Mr. Link back to his ancestors the Yeti, in the North.

The Animation – Laika is a master of stop-motion animation. “Missing Link” continues that same quality. The levels of detail they put into the forest set, the Yeti Temple and the ship is just spectacular. This is Laika once again showing why they are famous for their animation.

Sir Lionel Frost – Sir Lionel is the only character with a real character arc. He goes from a sociopath who uses people for his own glory, to one who considers his friends family. We see this in how he cares for Adelina and Mr. Link/Susan and though it takes work for him to gain empathy, in the end he finally does. Hugh Jackman does a fantastic job in the role. He plays the stuffy English man stereotype but the film at least lets him grow beyond it. The same can’t be said for the rest of the cast and the boxes they are put into.

Adelina Fortnight – Zoe Saldaña’s character is good in that she grows beyond the death of her husband and becomes her own adventurer. The problem is the stereotype the film has given her. She is still one of the best characters in the film but she is the angry latina which is a problematic trope and I wish Laika had been better. I liked her character but that trope kept her from becoming more three-dimensional because she was playing a problematic trope that hurt what character had been formed.

The Yeti Elder – Emma Thompson does a great job as the leader of the Yeti’s in the Yeti Elder. They are a closed off community who imprison Lionel, Adelina and Mr. Link dubbing him a redneck and not one of them. She does a great job of showing why the warriors follow her and also the closed off nature of what her people have become. They are portrayed as a warrior civilization with her as the head with survival above all else. Which given their isolation, I can see but there was no nuance. The Yeti Elder showed as much. She was just as close minded as the English villain just not a sexist imperialist.

The Villains – Lord Piggot-Dunceby is simply a sexist pig consumed by ego (he has a great design at least as he is the largest human in the film) while the hunter is just a western style cowboy who never feels threatening. The characters are one dimensional and they serve their purpose within the narrative but that is about it. I’m glad Stephen Fry at least hammed up Lord Piggot-Dunceby or he would have been a bore. So much more could have been to critique the British Empire and the era but Butler was really lazy in trying to delve deeply into any of these characters or ideas.

Mr Link/Susan – Zach Galifianakis was the wrong person for this role. Mr. Link needed to be played by more than a comedian as so much of what he says are meant to be jokes said by a comedian. This was a disservice for the literal mindset and childlike nature of Mr. Link. This is a character who doesn’t really grow. He eventually finds family in Adelina and Sir Lionel but that isn’t through his choice, it is through theirs. Throughout the story he is always rejected and a more nuanced actor and script could have made that mean something.

Colonial Tropes – The problematic colonialist tropes that stood out where how native cultures were treated as props. They were just there to get Sir Lionel to his next location and discovery was always seen as new. The power of the British Empire is never questioned even as the film tries to be progressive.

I didn’t like this film but I didn’t hate it either. This film was enjoyable and fine. I would also only recommend for people who are fans of Laika like myself and who want to keep the studio going. I don’t want stop-motion animation to become a thing of the past, and Laika Studios is still one of the best at it. I do wish this film had managed to stand more for something and hadn’t been problematic, but for a forgettable fun film, it was serviceable.