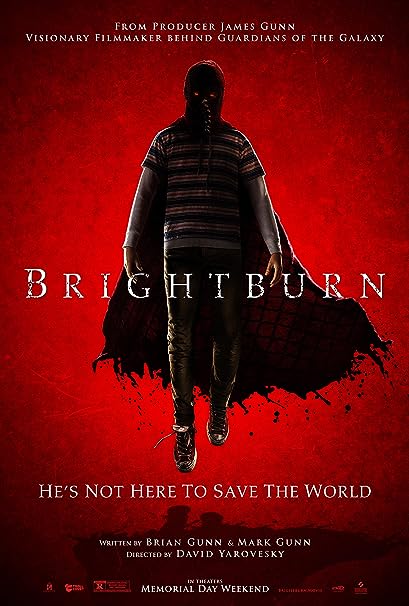 “Brightburn” was a film I enjoyed. It is good but it could have been great if it had been willing to explore the deconstruction of Superman and Smallville further. This is clearly what it takes inspiration from and gives us a horror alien invasion story in the process.

The film was directed by David Yarovesky and written by Brian and Mark Gunn.

The story follows the Breyer family after a mysterious ship crashes near their farm carrying a mysterious child they name Brandon. This dream soon finds itself becoming a nightmare as Brandon begins to discover he has powers.

The Family – The family is the best exploration within this premise. We see a mother who hasn’t been able to have kids now having a son she loves and a dad who wants to be a father too. Elizabeth Banks is great as Tori Breyer and David Denham (Pam’s former fiance from “The Office”) does the distrusting anything new as a threat really well. There isn’t a happy ending for either of htem but the fact that this is a horror movie, I’m not going to spoil it. Watch their relationship with Brandon, which is the best part of the film.

The Horror of Power – We see Brandon go from someone who hurts people for revenge and to cover up things, to killing the ones he loves. This arc for his character made sense given the alien technology telling him to take over. It isn’t good in regards to “Superman” mythos, but I can see where they were taking that mythos when they were making this horror film. I might look more fondly on this film I enjoyed, depending on where they take a potential sequel.

The “Kryptonite” – The one thing that is implied to be able to hurt Brandon Breyer is metal from the ship he came on. We never fully see this though and the reason why this is, isn’t explored. This was a major loss. This was originally going to be a con, but there are enough implications that the parents know it hurts him in how they act around him in relationship to the ship. This isn’t great but it isn’t a total loss of developing Brandon’s “kryptonite.”

The Corruption of Brandon Breyer / Brightburn – Brandon Beyer’s corruption is shown in two ways. The first is when he realizes he can’t get hurt after putting his hand in the blade of the lawnmower after throwing it, and the second are the visions of an alien voice telling him to “Take control.” The idea of him becoming a bully because of his power is far more developed than the alien side of his story. It is in the way he uses his ability to not get hurt to hurt and kill others once he realizes he can. The alien side needed to be developed more. It is clearly something driving him but we never get the purpose behind it. The alien side calling him to take control simply exists, which is why I only rate his corruption as okay.

Developing the World – The small town and characters overall feel underdeveloped. They experience events but we never get their deeper thoughts on things. In this way like “Us” this works almost better as an episode in a show. This is what makes it a con. I had no favorite character in this film but I did find the idea of the film appealing. There is potential in this world but beyond Michael Rooker appearing as a paranoid tv announcer talking about other superhumans who are causing problems elsewhere. I loved that bit of world building, but Brightburn needed to feel more lived in, and it didn’t. Same with the alien species that Brandon Breyer came from. We know nothing about them beyond Brandon’s desire to take control. This was an easy chance at world building that should have been explored more.

This is a film worth checking out, if you were a fan of super hero films or horror films. The film isn’t great but it is enjoyable. Even with the story needing to be longer and more developed it still kept me drawn to the screen through the run. If they make sequels I would most likely see if they keep this quality, though I hope they can be better. This is a premise that deserves to be more and if has sequels, there is the chance to do so. As someone who only got into horror films in the last few years, I saw this as promising.