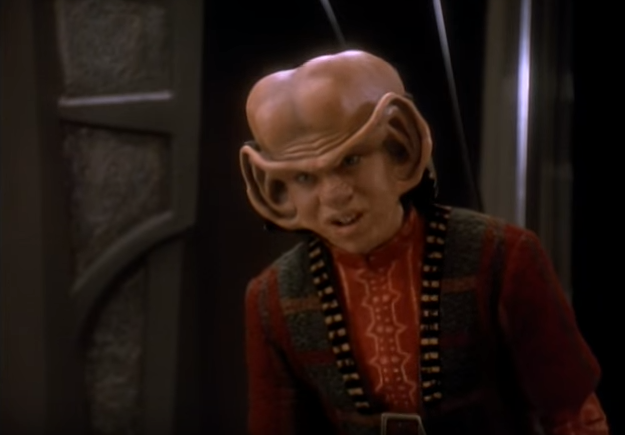 This is a review that was inspired to honor the life of Aron Eisenberg, who died September 21st, 2019 of this year. I know him largely because of his role as Nog, who is easily one of the most well rounded character in “Star Trek” to have one of the most well developed arcs. I’m grateful I got to hear more of his story and the lives he touched in the “What We Left Behind” Documentary. Aron was amazing in this role and his podcast he formed after is amazing too. The world lost an amazingly talented individual this year and my heart goes out to his family. I chose this episode because of how well it captures the arc Nog goes through and the choice he makes as well as the sheer range of Aron Eisenberg had as an actor. Before I get into spoilers, this is a good episode you should watch.

The episode was directed by Alexander Singer and written by Ira Steven Behr and Robert Hewitt Wolfe.

The story follows Odo and Kira as they pursue a Maquis Raider leading to Kira becoming trapped in a collapsing cave, as on “Deep Space Nine” Nog wants join Starfleet and finds himself up against his past and Federation prejudice.

The Odo and Kira Plot – The Odo and Kira plot is really an exploration of Odo and one of the core reasons why he hasn’t rejoined his people in the Gamma Quadrant. It is here we see it is due to his deep friendship and love of Kira. At one point when he believes she will die he stays with her, willing to risk his own life because being with her matters that much. We can see how much their relationship has grown over the years too, as the episode starts out with them bickering like a married couple. It is a well done plot that is only made less by the reveal and us having to wait for the true payoff later.

Nog and Starfleet Prejudice – The B Plot involves Nog and his coming of age. It begins with him in Ferengi custom giving his earnings to in Ferengi society would be his mentor to train him in whatever art of business he is seeking. In this case Nog gives his gold pressed latinum to Commander Sisko. Sikso at first doesn’t believe him and it isn’t just him. Even Jazdia who is one of the more open minded members of the crew even doubts now genuine Nog is and it not being some trick. It is sad given that Federation prejudice is so strong that even a culture that is open minded isn’t trusting someone who is giving everything to be a part of them. For Commander Sisko this is explored deeper as we learn that the reasons behind Nog wanting to join Starfleet is because he wants a future and he knows he “doesn’t have the lobes” for business, like his father Rom. After this confession he is accepted and Nog’s story in Starfleet begins.

Forging a Separate Identity – The theme of this episode is one of forming a separate identity beyond what is forced upon you. The Founders want Odo to join but he constantly rejects them. It is here where the reveal is Kira was never in danger is discovered and it was the Female Founder all along. Odo’s denial of his people’s desire to control and his attachment to solids is the point of his arc, where in the case of Rom it is his rejection of Ferengi business society and him seeking to be appreciated for his talents for the greater good are there. He forges a separate path, but unlike the Founders who reject Odo’s path…Rom is proud of Nog for the path he chooses.

Nog and Rom – The best arc in this episode is Nog’s arc as we see someone already judged for the mistakes he made as a child and for being a Ferengi opening up and forging his own future. He is the first Ferengi to join Starfleet and this is the episode where it happens. All of this is driven by his father. Rom is abused by his brother Quark and though he is a genius when it comes to tech. Quark doesn’t admit or see it at this point. Nog, is the only one who does and in turn Rom sees the potential that exists in Starfleet for Nog so supports his choice. It is a small scene but the scene Nog and Rom have together when Rom supports his choice is just as powerful as when Commander Sisko does after Nog tells him why he wants to join in the first place. This is the heart of the episode and what makes it so great.

The Reveal – The Founders do so much manipulation and this felt like another base Founder Plot. It wasn’t bad but they must have known that Odo cared for the crew as his family too. Making the love for Kira makes sense given what we saw in prior episodes but I fail to see how that is useful to the Founders unless they are going to use Kira to bring Odo back to them. During the “Occupation of Deep Space Nine,” I didn’t see that level of thinking things through. Kira was used but it seems like Odo staying played a bigger factor in them influencing him than Kira. That is why this reveal is fine, but it isn’t great. I would have preferred Kira saying she loved Odo being real. Once you have that confession it just gets weaker when it is the real thing. Don’t do fake outs in shows unless it means you’ll do it in a better way.

If you are a fan of “Star Trek: Deep Space Nine,” you probably loved this episode. This is a great ensemble piece that develops Odo and Nog as well showing that the Federation has prejudice that this episode never really addresses. Why can’t a Ferengi join Starfleet? It makes me think that Worf probably experienced similar prejudice because of the Klingon and Federation Wars. I enjoy episodes that critique the Federation and show that it still needs to grow. This is true to human nature and part of what made “Deep Space Nine” work is because of how it did call out xenophobia, racism, sexism and other forms of bigotry, even as the show itself was still maturing in that growth and did vary by writer. The progressive future of “Star Trek” is one of hope and where I hope someday humanity can be, even if won’t be within my lifetime. “Star Trek” is about the goal of the better future and within the show we see that in the individual fights our characters face, such as what Nog faced in joining Starfleet.

R.I.P. Aron Eisenberg. You touched so many lives and this review is to honor you and the amazing life you lived.