2019 was an interesting year for film. There were quite a few types of film I didn’t see. I didn’t see any of the live-action Disney remakes as I had no desire too. I skipped quite a few remakes such as the “Men in Black,” “Hellboy” and “Charlie’s Angels” remakes. I didn’t see any of the Stephen King books adapted to film. I will probably review them at some point but I had no desire to watch them in the theatre. I was much more picky about films I saw this year and it certainly lead to a better viewing experience. I list some of the films I saw this year below and for a few there are reviews upcoming, but they didn’t make my Top 5.

Now for what I did see. For the films I saw this year that were bad were “The Dead Don’t Die,” “Velvet Buzzsaw” and “Glass.” These trashfires all looked great but had stories that were crap. Either there was no bigger point, the characters were unlikable or the story was simply crap.

Most of the films that I thought were good or enjoyable but didn’t make my Top 5 were the MCU films that came out this year, “How to Train Your Dragon 3,” “Rise of Skywalker,” “The Irishman,” and “Joker.” These were films I may or may not see again in the future and were good for the outings they were but left me with no lasting investment. Some were fine ends or complete stories, while others were good experiences that didn’t stay with me after or whose deeper point just wasn’t there or didn’t stick.

For great films that were in competition for making the list so will get honorary mentions here are “Once Upon a Time in Hollywood,” “El Camino,” “John Wick 3,” “Shazam!” “The Man Who Killed Don Quixote” and “Toy Story 4.” Each of these captured an element of what I love in films and if they didn’t have a deeper point at least were beautifully crafted films that brought more than the sum of their parts. 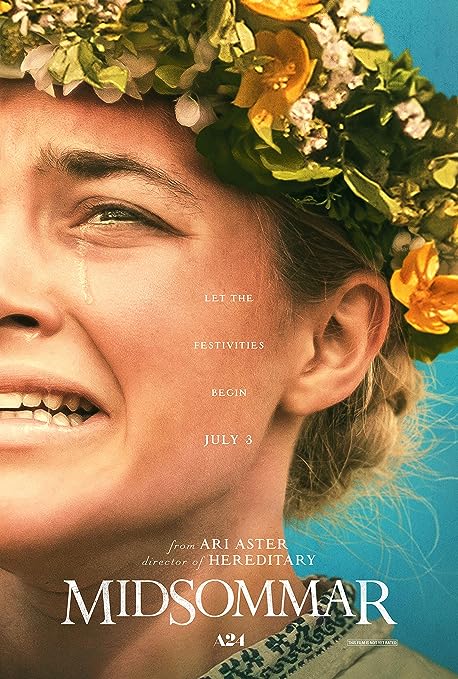 Last year Ari Aster’s “Hereditary” made my Top 5 films of the year, and he once again pulls it off this year. “Midsommar” is a haunting horror film that explores the themes of trauma and isolation while managing to make daylight and summer creepy. The one thing that keeps this film being higher on the list is the fact that besides the main character, none of her friends are likable. For the purpose of the narrative, them being unlikable works as it plays into Dani’s isolation that she is going through after the death of her parents and sister and the events that take place in the small Swedish cult village celebrating midsummer. If you are a fan of horror films or enjoyed “Hereditary” I highly recommend this film. There are layers of storytelling in this beautifully told horror story and I can’t wait to see what Ari Aster does in the future.

4) What We Left Behind – Looking Back on Star Trek: Deep Space Nine

I’m a Trekkie and this has been a rough year in regards to that, especially as it relates to “Star Trek: Deep Space Nine.” Aron Eisenberg (Nog) and René Auberjonois (Odo) both died during 2019. In this documentary they feature prominently and we even get to see a hypothetical Season 8 with Captain Nog at the helm. This is a documentary made for the fans and it explores so many amazing aspects of the show and what makes it one of my favorite shows of all time. Whether it is social justice that is explored through sci. fi. lens, the cost of war or countless other ideas these are presented to us by the showrunner Ira Steven Behr as he explores the show he created. Documentaries have never made my Top 5 Films at the end of the year, until 2019. If you are a fan of “Star Trek” and especially of “Deep Space Nine,” you really should see this film. This last year it became even more personal, because of all those left behind, but remembered.

“Jojo Rabbit” is a genius satire and drama that feels like the best of Wes Anderson meets the best of Mel Brooks. The story follows Johannes (Jojo) as he discovers his mom (played by Scarlett Johansson) is sheltering a Jewish girl from the Nazis. From here is his unlearning of how toxic and evil fascism and Nazism is, while dealing with his imaginary friend Adolf Hitler (played by Taika Waititi). The film is brilliant, powerful, intelligent and full of so much heart. In the era we live now, with the rise of facism around the world and the targeting of the most vulnerable in refugees, immigrants and so many others. This film is extremely relevant to modern day problems facing so many communities around the world and here in the United States. This film is definitely worth your time.

“Parasite” is above “Jojo Rabbit” just barely and that is largely due to character nuance. This is a film that explores class and privilege in South Korea while giving us some great character studies in the process. The story follows two families. One family is a bunch of cons called the Kims who con their way into fulfilling roles of help that the Park family needs. During the con we see the nuance and complexity to both families as well as how class, whether it is upper or lower class carries on through generations. This is a film where the nuance of the characters grew on me, you see their flaws but they are also not all they appear to be either. Both members of the families have moments of compassion or cruelty which leads to the ending being so powerful and tragic. I won’t give away anymore than that, but I highly recommend you check this one out.

“The Lighthouse” is a beautiful, amazing and disturbing film. This is a film that explores isolation and madness as well as the human desire for connection even in the worst places in the mind. The story follows Ephraim (Robert Pattinson) as he fulfills a contract as a wickie at a Lighhouse of the coast of New England. It is here his only company is the boss of the Lighthouse, the half-mad Thomas Wake (Willem Dafoe). Over the course of the film we see what isolation does to both of them as we are given symbolic visions of what may have brought Ephraim here to the contract in the first place and Wake’s obsession with “The Light” that has an almost religious power for him. I won’t give anywhere than that as you should see it yourself. This is a brilliant phsychological horror film and easily the best performance I’ve seen from Pattinson and Dafoe. I saw a lot of great films this year, but none of them reached the perfection that was this film.