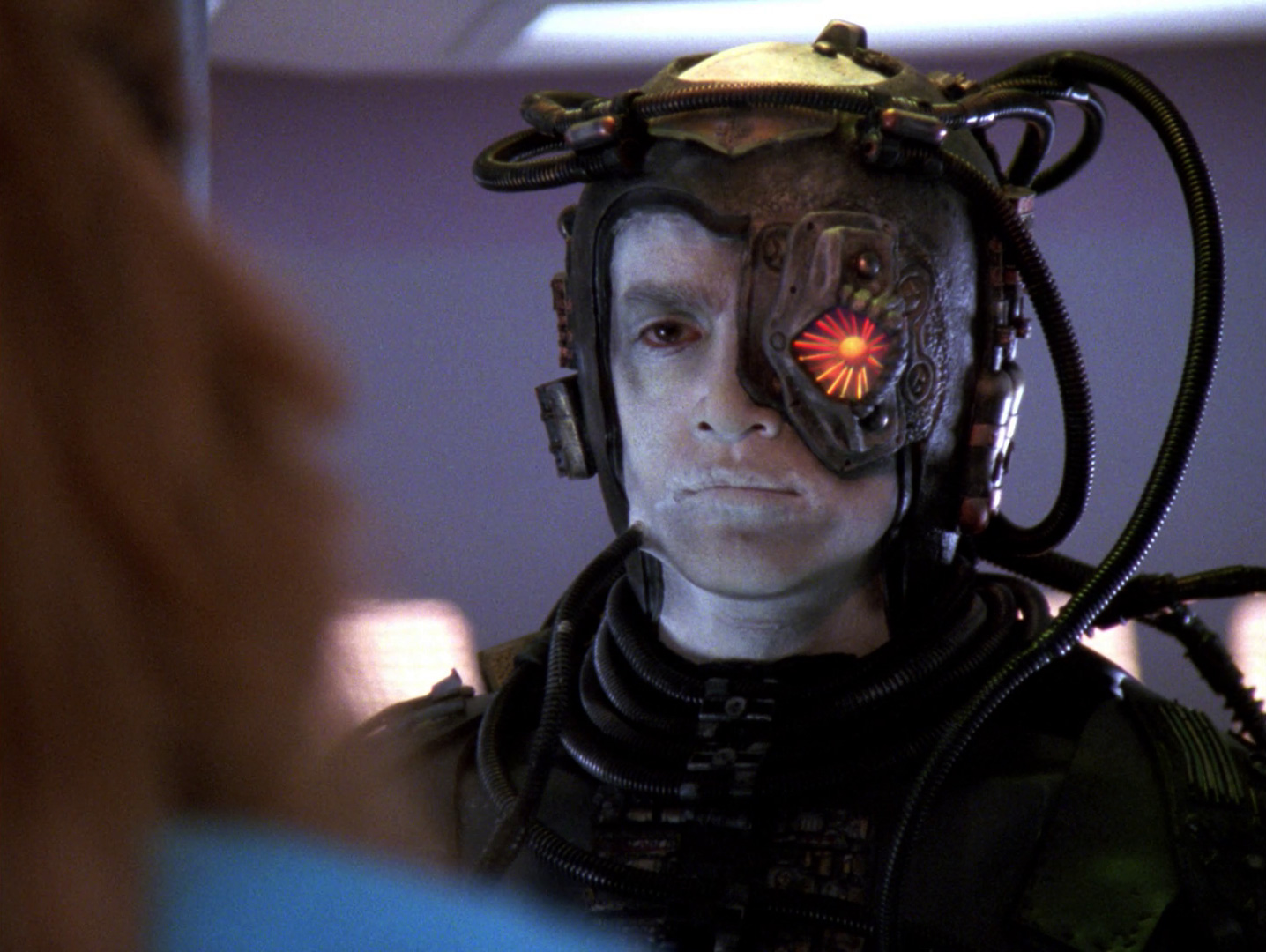 “I, Borg” is such an amazing episode. We see a return of the Borg with Hugh and an exploration of the consequences of the Borg on members of the crew. This is also an episode that provides a moral conundrum too. What should be the ethics of war? This and the theme of PTSD are explored in the episode beautifully. This is easily one of my favorite episodes of “Star Trek” and I’m glad Hugh will be back in “Picard.” Suffice to say, I highly recommend this episode.

“I, Borg” was written by René Echevarria and directed by Robert Lederman.

When a Borg Drone is rescued, Picard must wrestle with what will become of it as he and other members of the crew face what the Borg Collective has done to them.

Dr. Crusher – This is a surprisingly good Beverly Crusher episode. She is the first to advocate for saving the Borg drone. She demonstrates her oath of the sacredness of all life beautifully and her empathy is what made La Forge and Hugh’s friendship possible and Guinan and Picard’s eventually coming around to seeing Hugh’s humanity. I wish she got more episodes like this. She is the moral center of the episode and the episode is stronger for it.

Geordi La Forge – As Geordi is the one studying Hugh in order to weaponize him against the Borg he becomes friends with him. It is Geordi who gives Hugh his name and teaches him about consent and individuality. This friendship goes so far that Geordi advocates directly to Guinan and Picard that he thinks the plan is a mistake. In the end his advocacy for Hugh’s humanity wins out and Geordi is the one who says good-bye to his friend before the Borg take him back.

Guinan – Guinan’s people were destroyed by the Borg and she confronts Hugh about this. She is the one who is at first against Picard’s growing empathy, given the destruction of her people…but Geordi changes her mind. After talking to Hugh and hearing him speak of his loneliness and empathy for her she realizes Hugh is not her enemy. Hugh is just a scared lonely kid. After this she advocates for Picard to not use Hugh as biological weapon against the Borg.

Hugh – Hugh is the I in “I, Borg” as this episode is about him developing a sense of self. As far as we know he has always been a drone within the Collective and because of this never had the chance to learn empathy or self and this episode is where he learns all of this. In the end he sacrafices himself so the Borg won’t target the Enterprise and to protect his friend Geordi. Jonathan Del Arco does such an amazing job in this role. He is the drone becoming an individual and it is his performance and relationships Hugh builds in the episode that make it so great.

Captain Picard’s PTSD – Picard’s PTSD is a major theme of the episode. The Borg mutilated his body and mind and because of this he understandably does not see any humanity within them. We see how deep this is as he pretends to be Locutus to test Hugh and it is in this test when Hugh denies to assimilate the crew and the Geordi is his friend that he sees the plan to weaponize Hugh is immoral and wrong.

An Exploration of War and Morality – The main moral issue being wrestled with in the episode is whether to use Hugh as a biological weapon against the Borg. He would be used a virus to shut them down. When the show starts out Dr. Crusher is the only one against this but slowly as Geordi becomes friends with Hugh and Picard talks to Hugh they see the humanity of the drones and that in committing genocide they would be acting like the Borg. It is handled really well and they take time to explore this over the course of the entire episode.

Borg Indifference – Geordi is able to go down to the planet where Hugh was found to say good-bye to him as the Borg pick him up. The thing that bothered me with this is the Borg not recognizing his role in their destruction prior. The Borg are a threat to the episode but they have no tactical sensibilities it felt like. The reason that is given is that they don’t notice individuals (as seen by them being able to free Picard in “Best of Both Worlds”) but shouldn’t they have adapted to that by now? It was one of the reasons for their defeat.

This is one of my favorite episodes in “Star Trek: The Next Generation” and shows just how strong the show could be when it focused on character and themes. This isn’t the last time we see Hugh and what is done in this episode has consequences for the Borg we see later. This episode is a great a example of structure working really well too. Dr. Crusher’s empathy leads to Geordi and Hugh becoming friends, which leads to Guinan getting to know Hugh and finally Picard giving Hugh a chance after Guinan admits her hate and rage against Hugh was wrong. This is powerfully done and creates an unforgettable story.

9.8 / 10 The strengths of this episode outweigh the flaws.