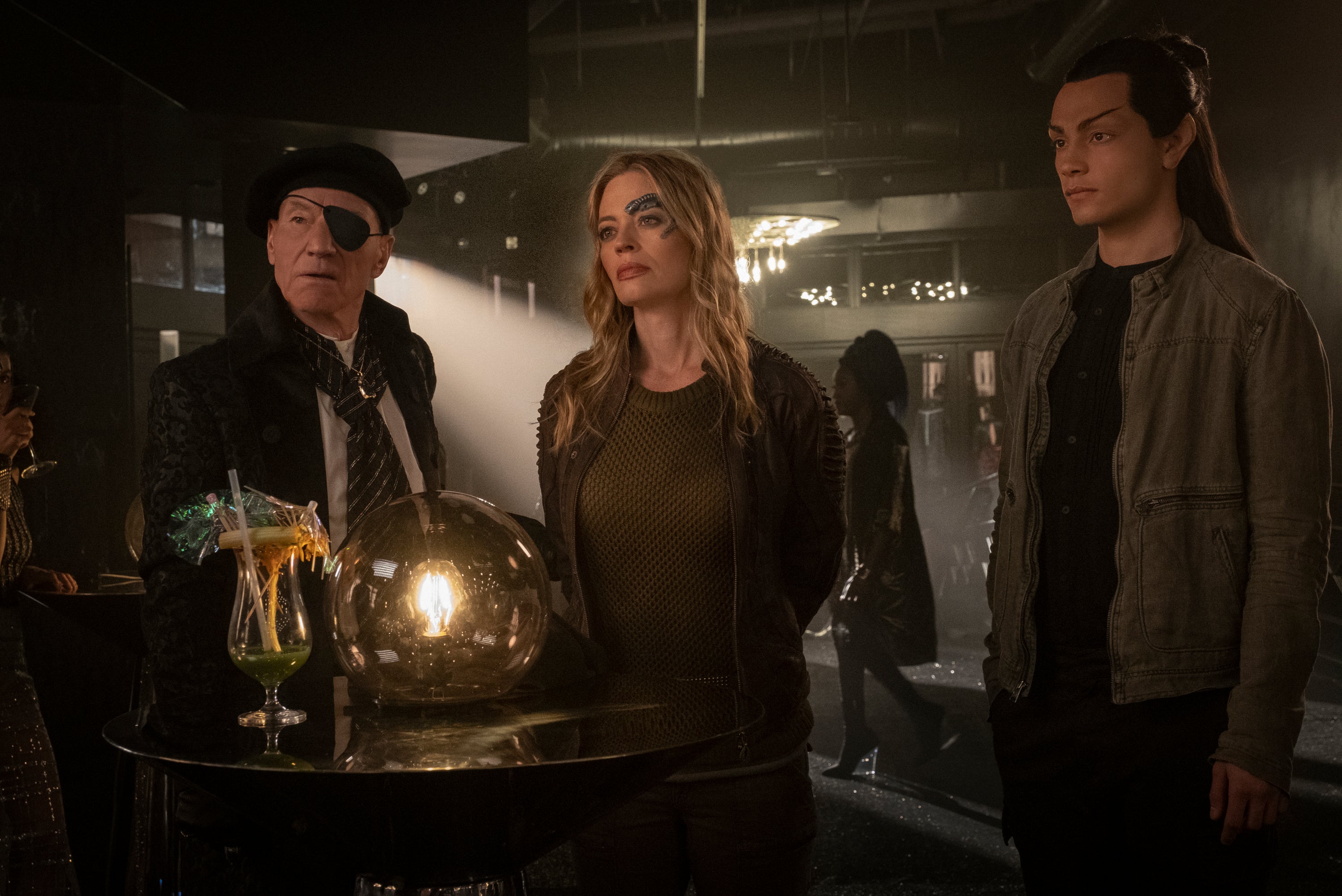 This is an episode that has me completely conflicted, and my end score reflects as much. I appreciate that Seven is back, besides the Doctor she is the best part of “Star Trek: Voyager” but there is so much whiplash. This episode gives you emotional moments with so much ham that as much as the episode is still enjoyable, I would not call it good. There is a fine line between ham and drama and finding that balance can create great. Hell, I love so many comics and films based off comics that found that line. This film, doesn’t and it is the performances that elevate it to something worth watching.

“Stardust City Rag” was directed by Jonathan Franks and written by Kristen Breyer.

The story follows Seven’s joining of Picard and the quest for Maddox on Freecloud.

Freecloud – Freecloud is the first rouge planet that we have been a part of on Trek in a while. I like how it fully takes advantage of tech. to read the interests of the crew and that it isn’t safe in any way. This helps raise the stakes as Seven is used as bait against the crime lord of the planet to trade for Maddox.

Bjayzl – The villain of Freecloud is Byjazl. She disects Ex-Borg for their parts and sells those on the black market. She is the very much Marina Sirtis in looks from early “Star Trek: The Next Generation.” For all intents and purposes she is a a corrupt human who outsmarted Seven of Nine. This was brilliant and as a one of villain I greatly enjoyed the tension she added to this episode. If “Star Trek: Picard” is developed further, and we have more Seven cameos than her intro. in this episode could mean more.

Seven of Nine – Seven was often times the rogue batting against Captain Janeway in “Star Trek: Voyager.” Whether it was the Omega Particle or other issues she took a personal investment in, Seven was not starfleet. From this, her becoming a Frenris Ranger made sense to me. It has also been years since Voyager  returned home. Just as Picard has changed since “All Good Things” I could see it Seven too. They grew from the world they were given. In this her motivation for revenge against Bjayzl make sense as it was Bjayzl infiltrating the Rangers where she learned about Icheb and in turn created a trap for him, leading to his death. The rage Seven feels makes sense and fits given how much she cared for Icheb.

Picard – The greatest moment from Picard is his talk with Seven before she leaves at the end of the episode. They are both PTSD victims of the Borg and them both admitting the ongoing journey of finding their humanity is powerful. Patrick Stewart once again doing a fantastic job in the role.

Raffi and Rios – Both of them are explored more. We see Raffi and her failed relationship with her son from her conspiracies and drugs and we also get Raffi as the one to pull everyone in. He’s grown on me the most for all the main crew. His scenes develop him and for a mercenary he’s very respectful.

Tonal Whiplash – Icheb looses his eye before his adopted mother kills him and after we get fun playful infiltration of Freecloud Banter…How does that make any sense? Also after we get wondefrul ham from Patrick Stewart Maddox joins Icheb in the deadpool, so we get less people to root for.

Maddox’s End – Maddox being killed by his lover was sadly predictable. Her joining Picard opened too many questions (the gun she had, etc.) and she shared a lot with Picard when they first talked. I’m rooting for her getting a rewarding end, but her killing Maddox out of fear of Soji and the synths didn’t do it for me.

I think this episode could have been a great spy thriller and in turn matched up with Seven’s revenge or been a very good joke Freecloud episode where we see how well the cast can play off one another in an alien environment. They wanted both so the tonal whiplash hurt this episode a lot. Icheb’s death did not to be so graphic and I wanted more time to develop character. Frakes did a good job presenting it all, but this needed a better script. Enjoyed the outing but it was hardly good or great. The theme of the episode is the death of hope as Picard seems to be the only person we’ve met so far, still holding onto it.