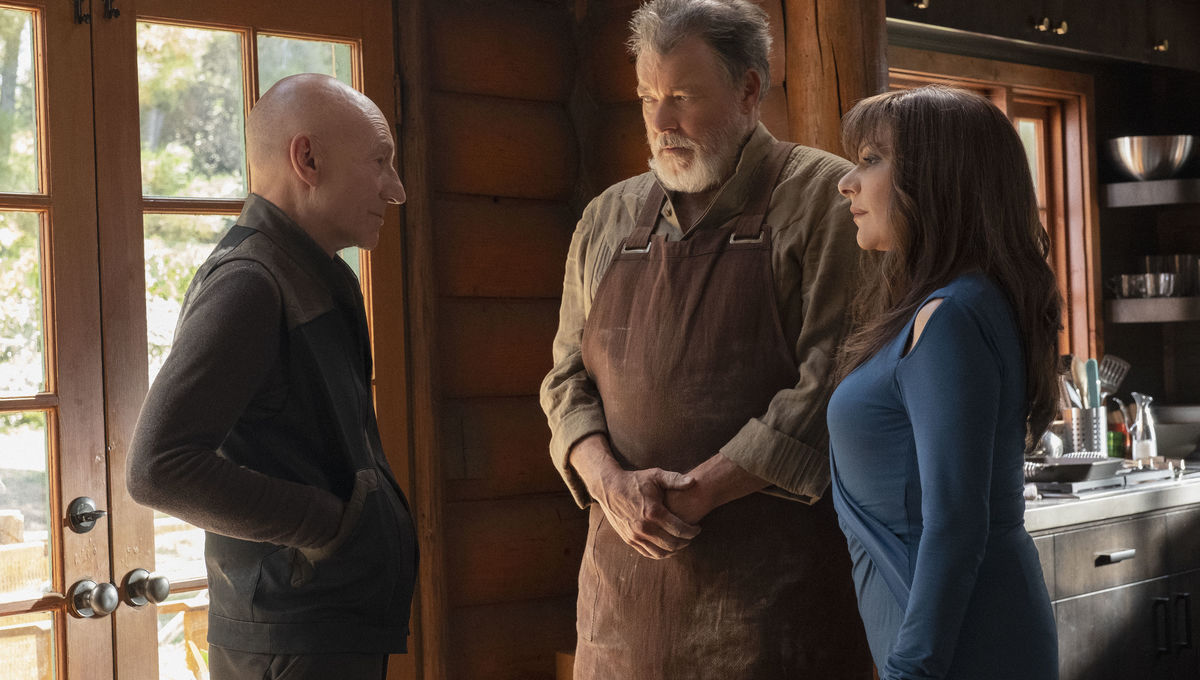 “Nepenthe” is an episode that feels organic. This could have easily turned into fanservice with the reunion between Picard, Riker and Troi and I felt like it didn’t. The characters have all changed and grown from the people they were before, while still remaining true to their core selves. In lesser hands they could have easily been caricatures of the people they were before. This isn’t a favorite episode though due to two things that happen, that I’ll get into below.

The episode was directed by Douglas Aarniokoski and written by Michael Chabon and Samantha Humphrey.

The story picks up with Picard and Soji meeting up with Kestra, daughter of Riker and Troi. As they go to them for safety Elnor attempts to escape with Hugh from the Cube and Agnes Jurati begins to face what she did to Bruce Maddox.

Soji and Kestra – One of the relationships that shows us more of who Soji is, is her relationship with Kestra, the daughter of Riker and Troi. Kestra invents langauges and hunts and is very open. This openness and honesty puts Soji at ease and helps her sort through all she’s been through. Kestra is also Soji’s ally. Soji ends up being an older sister of sorts and I really enjoyed how their friendship grew.

Riker and Troi – Riker and Troi are awesome in this. They are supportive of Picard, while still holding him accountable. When Picard mocks Soji’s doubting of all she knows to be true Troi reminds Picard that as Captain he was better, while Riker said he just could have invited her to dinner. We see more of the people who they are as Troi is the glue of the family, we learn they lost a child and because of it she can’t go back into Starfleet again, while Riker is still on reserve within Starfleet. They are a contrast to Picard and help him only to grow. It was wonderful seeing them again.

Events on the La Sirena – On the ship Agnes is having mental breakdown as she accepts she killed Bruce Maddox and as the Narek tracks them with the tracking device Commodore Oh had given to her. It is very well done as her being treated as innocent is too much to take and she attempts to kill herself to get Narek off their trail. The episode handles this arc really well.

The Theme of Home – Home is a major theme of the episode. Soji realizes that was what the Romulans were using her for, and we see how home is safety for Riker, Troi and Kestra and in that adopted home is also a safe haven for Soji and Picard. This theme was beautifully handled.

Attribute Marina Sirtis as Guest Star – I don’t know why she wasn’t given guest credit, but it annoyed me. She is just as central to the episode as Jonathan Frakes and the producers should have known better.

Death of Hugh – Hugh is killed when he decides he is going to help Elnor get to the Queen’s Chamber. I wish he’d been leading the xB’s in revolt against the romulans who were controlling them at least. There is always the chance he could be brought back, Seven has resurrected the dead with nano-probes in the past and she is set to show up next episode. We’ll see what happens. Hugh is my favorite character on the show besides Laris and deserved a better death at the very least.

This was a good episode. Things finally come to a head with Dr. Jurati and what she did, we get some more time with Hugh and the reunion with Picard, Riker and Trio was beautifully written. This episode has a lot happen but doesn’t feel rushed and it is this pacing that helped it remain as strong as it did. I’m curious to see what will happen and if Riker will come to Picard’s rescue in the end.

Final Score: 8.5 / 10 My issues with the episode where elevated by the solid writing going on everywhere else but “The Artifact.”