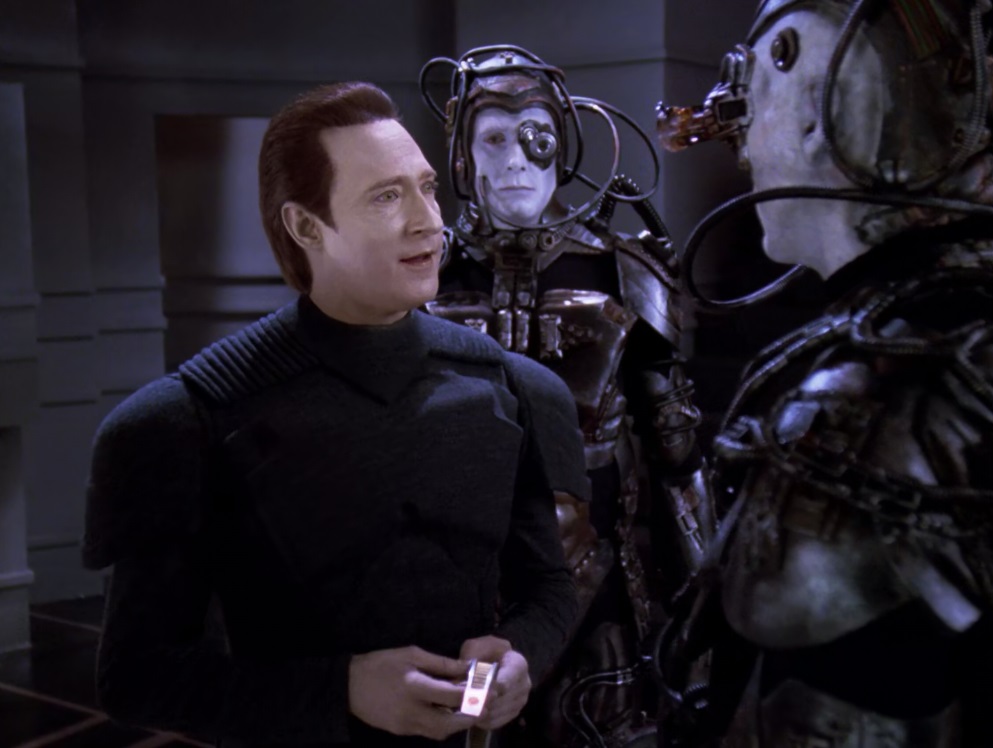 “Descent, Part 2” has many of the same problems as Part 1. There are many good ideas here that really aren’t explored to their full potential. The whole motivation beyond Lore and the Borg is base and isn’t well thought out. What it means to be Data isn’t even really fully explored either or the Borg concept of individuality. There are enough decent plots present though, that I did enjoy this as well as Part 1. I wouldn’t call either good, but there are enough interesting plots present to keep things enjoyable once more.

The episode was directed by Alexander Singer and written by René Echevarria.

The story picks up where we left off with the reveal of Lore leading this new Borg Faction. Dr. Crusher must face the Borg Ship above the planet as Riker and Worf seek Picard and the others. Picard, Geordi and Troi seek an escape as well as possible solutions to free Data from the control of Lore.

Captain Crusher – Dr. Crusher is in charge of the ship and successfully defeats Lore’s Borg ship after using shields from a prior episode that protect from radiation from the star and ends up destroying the ship. I really liked seeing her train up the recruits and get a working up dynamic going on between them, given Picard stupidly left her with a skeleton crew with so much at stake. I really liked her as Captain and wish she’d gotten more leadership opportunities like this in the series.

Escape from Lore – It was great seeing Picard and Troi work with an injured Geordi to free themselves and Data. I can’t think of a time we’ve had this specific team-up, but I liked their dynamic…even if they failed in the end. Geordi is always fighting on, Troi is trying to be supportive and Picard is always in problem solving mode. You can see how in many ways he is like Data. His problem solving place is where he is most comfortable.

Hugh’s Borg – Hugh’s Borg are refugees from Lore who leave after they see that his experiments are destroying them. The empathetic Hugh from “I, Borg” is still very much present and I appreciate that at the end of this episode he is leading the free Borg. That should have been more explored, he was with Riker and Worf who have both lead people and that leadership role was not discussed or explored at all.

Data’s Choice – Data gets back his morality core after Geordi, Troi and Picard tech some Borg tech causing Lore’s hack to stop working. After this it is only a matter of time before he switches sides. Given I was invested in Data and he drives both plots this was a plus. I wish it had been more of his free will, but I also get the writers were working with him still as a programmed machine. No matter how great his technology is, it can still be hacked.

Riker and Worf Wander – We have two interesting characters who wander until Hugh’s Borg capture them. After that they go to end up in the final battle and take part. There was no reason they couldn’t have been a more active part of the story. They do nothing to convince Hugh to join them. Did the writers just forget they had two awesome characters with Hugh to work with?

Why is Geordi Always Tortured? – Why is Geordi always being tortured? This time it is his friend Data too. I get Data apologizes after, but given how many times this has happened to Geordi it exists as a trope. The writers should have stopped this. They do their best to show Data has an understanding of guilt after the fact and Data still says he should keep the emotion chip, but it would have meant more if this hadn’t been a go to trope on how to use Geordi in the plot so many times prior.

This episode was better than “Part 1.” I think this is largely due to Hugh’s faction and the B Plot with Dr. Crusher. Those had more inventiveness and weren’t dependent on Data plot device. This was also enjoyable but did not rise to good. I wish the writers of both episodes had got together to write a fully coherent story. You have Lore, you have the Borg, you have Hugh…how could you not make this great? If you want to see how these stories end in “The Next Generation” you should still watch both these episodes though.

“Descent Part 1 and 2” Final Score: 7.2 / 10 Weighing it more against because it never reached good and missed so many opportunities to explore Soong’s sons and the Borg.