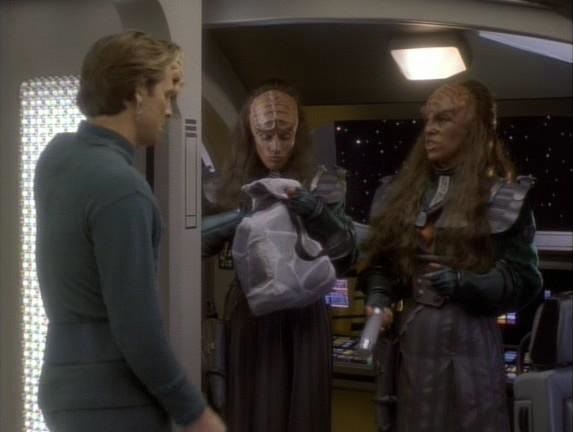 “Past Prologue” is a good example of the themes that “Deep Space Nine” loved to explore. This is an episode full of politics and character development that really make it an enjoyable outing. This is also the episode that introduces my favorite character on “Star Trek.” That character is Garak. He is such a fantastic character and this episode does a beautiful job of illustrating so many of the reasons why.

The episode was directed by Winrich Kolbe and written by Katharyn Powers.

The story follows the arrival of Tahna Los on the station after he is being pursued by Cardassians. He is part of a fanatical group that never gave up the fight against Cardassians called the Kohn-Ma. Kira and Sisko are left with a choice as Tahna Los’s story unfolds.

The Premise – The premise is really neat as it shows the politics that surround the Station and the wormhole. You have Bajoran fanatic groups like the Kohn-Ma who will have to be integrated back into society again. You have the shady dealings with Tahna Los and Kira’s torn loyalties. It is a really neat premise.

Commander Sisko – Commander Sisko is a character walking the line between keeping peace with Bajor and also representing the Federation. It is handled really well here as he is at first sympathetic to Tahna Los’s talk of reforming himself and giving up violence. He is sympathetic while still using all the crew at his disposal to see if Los is lying or not. After he finds out the truth he plans and springs the trap. It is really well done. I love how he and Kira clash but respect one another. It is a nice dynamic.

Tahna Los – Tahna Los is a nationalist fanatic but it is something that is slowly revealed over the course of the episode. He starts out sympathetic as a man who wants to give up violence, but we soon see it is all a lie given how he manipulates Kira and his dealings with the Duras Sisters. I found him compelling as an antagonist though as he truly wanted a Bajor that had no one connected to it. He was a nationalist and blinded by his hate for anyone not Bajoran.

The Duras Sisters – The Duras Sisters show up trying to get money to fund their family. They are handled well as we see them walk the line of diplomacy while never losing sight of their desire for financial power. It is a shame we never see them again after this until “Generations.” They had a lot of potential as they were the remaining power behind their house. The most I can think of is that even after this they were never able to rebuild Duras back to it’s former might.

Garak – Garak is introduced in this episode and he is wonderful. He uses Bashir to get information to Sisko to reveal the plots of the Duras Sisters and Tahna Los and I love his use of metaphor. Him being a spy is pretty on the nose in this episode, but I enjoyed it so much. Bashir is in over his head and this is played up well as Garak’s experience helps him get Bashir in the right place at the right time. God, this simple tailor is simply brilliant.

Major Kira and Uniting a People – This is a Kira episode and I like the conflict that she is left with. She is Liaison to the Federation and was also a freedom fighter during the occupation. In her eyes Tahna Los is a man who never gave up that fight. In this we see how she wants to unite all Bajorans and help Bajor make it’s own path but Los uses that until she catches him lying. In the end she is essential to his defeat and her relationship with Sisko is back to some level of normalcy. It is very well done and I got her aims with trying to help all of Bajor heal.

Pacing – For an episode about a secret plot, this episode is real slow. It really only picks up in the final act. This is a shame as there were so many political factions in play it could have done for more of that tension and less of Bashir going to Sisko on what he should do.

Odo’s View of Justice at this Point – Odo bashes Federation justice and compliments the simpleness of the Occupation. Not a good look Odo. When he said that to Sisko I was glad he grew out of that mentality to a degree. We do see the Founder in him come out in that mindset though. The Dominion functions in simple brutality.

This was a good episode that could have been great. The politics should have lead to a lot more tension but I love how involved most of the crew is with the main plot. This is a Kira story that uses “Deep Space Nine” as an ensemble show really well. I can see how the philosophy of the Kohn-Ma will play a part later in the story as well. Season 1 is all about the Federation and specifically Sisko and Kira’s relationship to Bashir and this episode is a shining of example of that.

Final Score: 8 / 10 Could have been great with better tension in the writing.