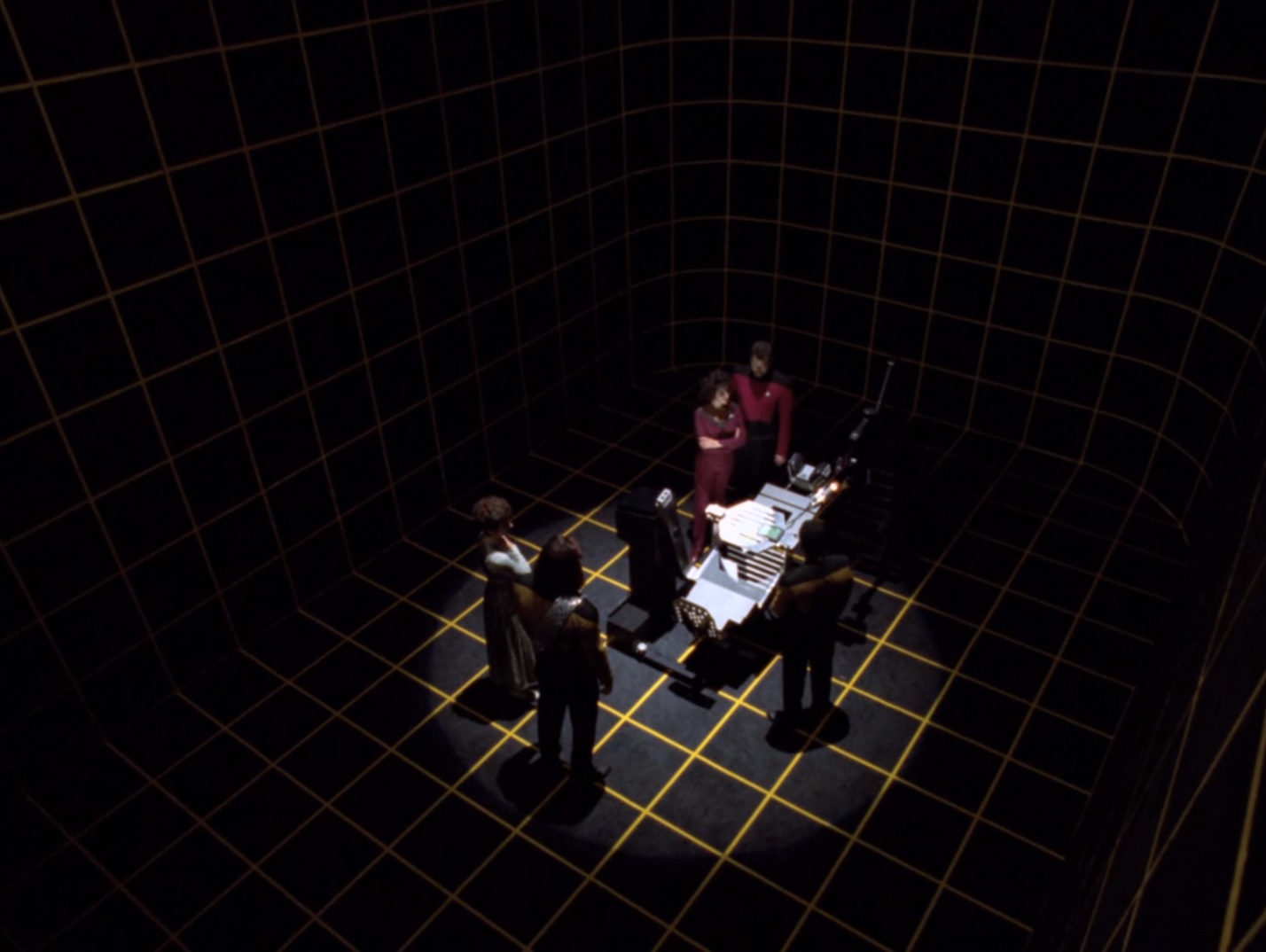 “Schisms” is an episode that is good at building tension and stakes. We get to see the day in the life of the crew as mysterious things keep happening, and get a ticking clock of the consequence of what the abductions are having upon the crew and ship. I appreciate how this mystery is handled as we see the daily life of the crew who are affected as things continue to feel off and the stakes grow.

The teleplay was written by Brannon Braga and directed by Robert Wiemer.

The crew of the Enterprise experiences losses in time as a subspace anomaly forms inside the Cargo Bay.

The Premise – The premise of the crew losing time, going missing and in the end being abducted is fascinating. This is a crew that is seeking out new life and new civilizations and now it is being done to them on an inhumane level.

The Crew Come Together – This is a good ensemble episode as at one point all the people who have been experimented on by the aliens meet with Troi in the holodeck to recreate the experiment. We have La Forge, Riker, Worf and Kaminer. Seeing them realize that the cold table they were feeling was a lab table is haunting. To go with this we discover from their recounting that the aliens communicate in clicks add an even greater disconnect of what they must be feeling. After we have the meeting room and using a pulse to track a crewmember when they are taken as we have one member of the crew still missing, and another returned who dies shortly after from the experimentation. The stakes are high so the crew has to act fast.

Commander Riker – This is an ensemble story overall but Riker still manages to remain one of the main focuses. The episode starts with him and he is the one the aliens are taking the most often. The crew uses this as he is given a sedative by Dr. Crusher to remain awake and saves the Ensign from the aliens who were experimenting on the two of them. It is a good Riker episode as we see how driven he is by his job and also his care for the crew.

The Threat – The treat is fantastic. We have a mysterious alien species that is causing an anomoly through their experiments that will eventually destroy the ship. Beyond this ticking clock of the anomaly they are experimenting on the crew and it understandably causing trauma. Them being unknown serves to elevate things too as the crew doesn’t know the intentions of these enemies only that they need to stop them.

Pacing – The episode starts out really slow and in turn we only get to see the enemy threat briefly. I wish they could have cut Data’s poetry session out and given us more time with this new threat or more time with the crew problem solving. It is Data’s poetry session that sets the stage of the slow burn and it takes time for the episode to really pick up, which is a shame given the stakes of the episode.

Developing the Aliens Further – This episode has another of the one-off aliens that we never see again. We know they are experimenting on people, but we never learn why or how they function beyond mad scientists. This is the biggest con against the episode as they have a really cool design, looking like reptilian birds and they feel like a threat through the entire episode. I wanted more lore on them and that is a common criticism you’ll find from me in most of the episodes that include one off species.

This is a solid episode that gives a fascinating problem to be solved and an interesting threat. This isn’t a favorite episode but so much about this episode works that I can’t help but recommend it. Creating tension and horror is hard in the best of circumstances but “Schisms” pulls it off once the pace picks up. We have stakes and consequences and in the end are given a quality mystery story.