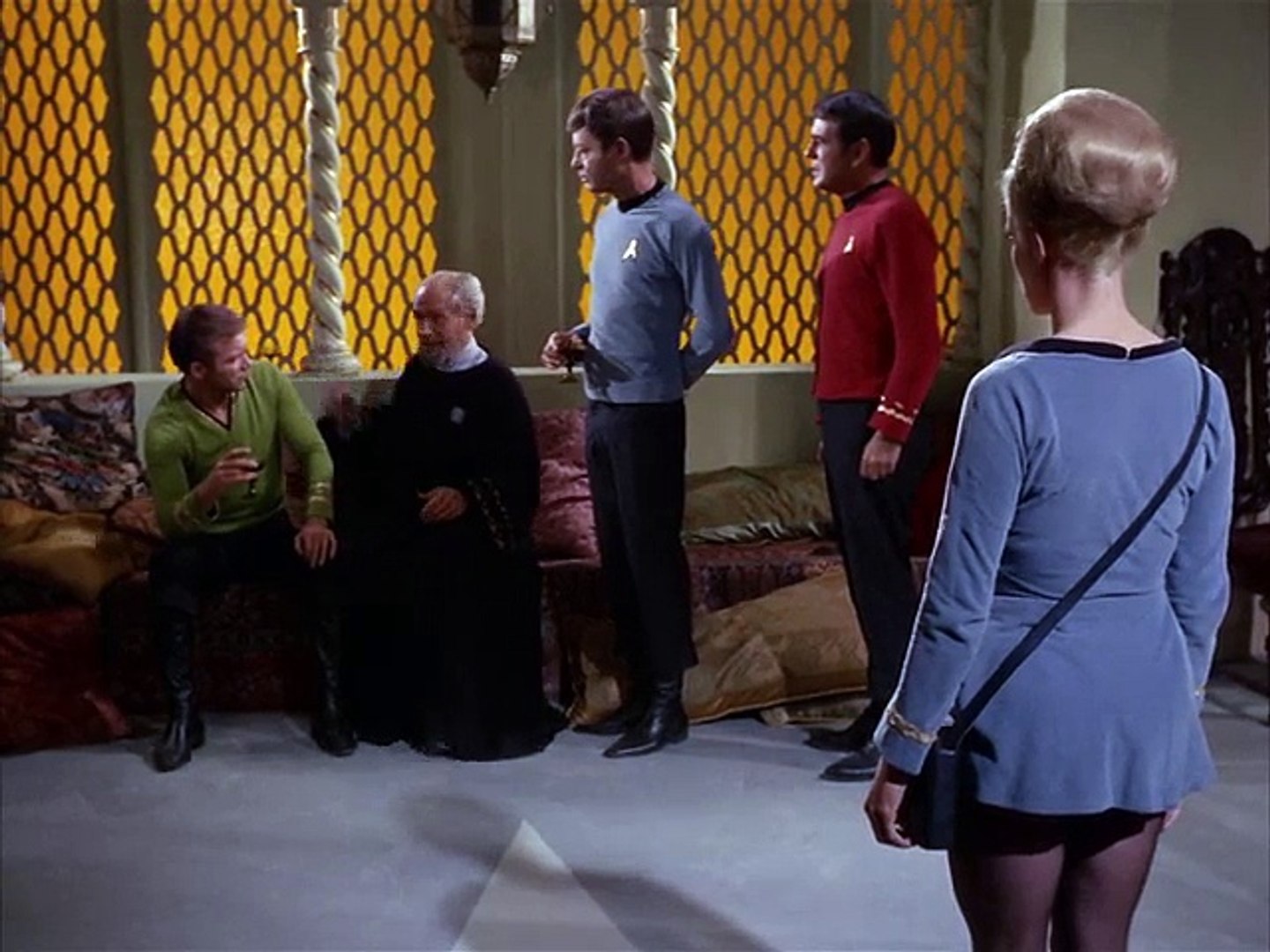 “Wolf in the Fold” provides an interesting premise and even has some good moments of tension before it fails as a story. This is an episode that focuses on Scotty, but we learn almost nothing about him, and even the main threat ends up not feeling like a threat. This is all besides the misogyny that runs through the episode. The premise had a lot of promise but absolutely fails and I’ll get into why below.

The episode was directed by Joseph Pevney and written by Robert Bloch.

The story involves Scotty being blamed for a murder when the crew visits Argelius II.

The Politics – In this story we see the politics between Argelius and Starfleet. Argelius is a free love society that hasn’t experienced a murder until the one that kicks off the episode. This gives an interesting dynamic as Kirk wants to do it by their laws but ends up offering up the computer as an answer when the Prefect is willing to try it after his wife is murdered during a seance to find the truth. From this, I wish he’d pushed back against more. He is the final judge on Scotty’s fate but he is very agreeable with Starfleet, even after his wife is murdered.

The Computer – The idea of using the computer to find the truth is really neat. It has all the information and can track if a person is lying or not. It is from the computer they found out the spirit of Jack the Ripper is the one responsible. This part of the episode is slow but I liked the computer being used the solve the mystery. It fit the theme of tech. solutions over supernatural which has always been a theme of “Star Trek.”

The Premise – The idea of a member of the crew being framed for murder on an alien world is fascinating. This base premise alone would have been enough if the politics between Argelius II and the Federation had been played up. Sadly the idea of the premise is not paid off.

Misogyny – Everyone woman we meet in this story is either being ogled by the crew (the belly dancer who gets killed) or is responsible for a problem. Scotty is on shoreleave because a female crewman caused a problem that lead to him hitting his head. This is so weak and isn’t helped by the text of the episode as all the other woman who we meet end up needing rescuing from Jack the Ripper or are killed by him.

The Enemy – Jack the Ripper is the enemy and his main host ends up being Mr. Hengist, an Argelian who is played by John Fiedler who voices Piglet in “Winnie the Pooh.” This does not work. Piglet’s voice is not ever threatening and the spirit taking control of the ship is for such a short time we don’t even see what the enemy is capable of. The moment the killings end on Argelius II all tension is gone and that is largely through how Jack the Ripper is presented. He just isn’t scary.

The Ending – The crew ends up fighting Jack the Ripper and him existing through fear by being pumped full of drugs that induce happiness by McCoy. This causes such whiplash that I don’t know why it was even included in the episode and focused on. Everyone is laughing, which takes away what tension there was by Jack the Ripper taking control of the ship.

This was an episode full of interesting ideas that it can’t execute. No ideas are delved into deeper and the supernatural threat just isn’t threatening. I appreciate that the episode is about someone outside of Kirk, McCoy or Spock but Scotty just doesn’t get enough exploration. This episode is reactive when it could have been so much more. There are the seeds of good ideas here, but failure to explore any of those ideas deeply leads to a bad episode.