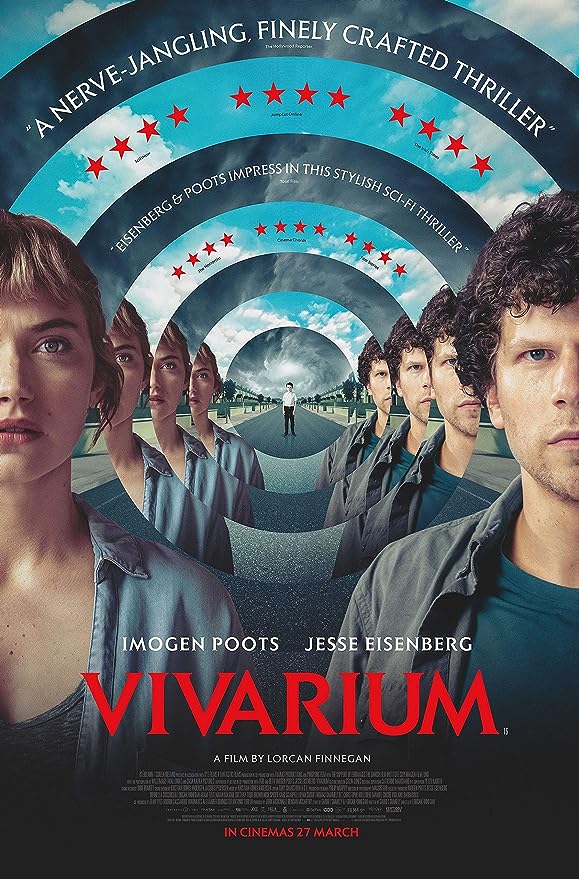 “Vivarium” feels like an episode of “The Twilight Zone” or “Black Mirror.” The film is just over an hour and a half, so it is comparably short while providing an interesting premise worth checking out.  It could have been more if it had developed the premise and antagonists further but I would recommend this to anyone looking for a good sci. fi. thriller.

The film was directed Lorcan Finnegan and screenplay by Garret Shanley. Shanley also co-wrote the original story with Finnegan.

The story follows couple Gemma (Imogen Poots) and Tom (Jesse Eisenberg) who find themselves trapped in a strange suburb called Yonder when their real estate agent mysteriously disappears after introducing them to their new home.

The Premise – The premise of a couple being trapped in the suburbs and physically unable to leave as it is an infinite loop is fascinating. This turns into their only out being offered an out when a mysterious child is dropped in a box for them to raise. The mystery of why they were brought here continues and is explored through the length of the film. This is illustrated by the Cuckoo chick tossing the original young out of a nest as the new mother raises it in the opening credits.

Cinematography – The cinematography in this film is beautiful. It does a good job of showing how trapped the characters are with the use of shadow and is used amazingly in scenes of intensity where the color pallet goes red or green depending on the situation. MacGregor captures the alienness of the couple’s situation and it lended strength to the narrative.

Gemma and Tom – Poots and Eisenberg do a great job together. They clearly have chemistry with Tom being a blue collar guy who enjoys solving problems with his hands, while Gemma is a teacher and clearly has empathy for those around her. This leads to them clashing when the mysterious baby is deposited for them to raise and in how they have no way to escape the suburb. We see moments of joy with them, such as when they turn on the car and dance in the light and moments of connection in the hell. They also fight and you can see that the reason they are still together is there ability to work through things. Imogen Poots’s Gemma is manages to survive to the end as chases after their “son” and even gives a final act of protest before she dies, repeating her refrain that she isn’t “his” mother. This entire story is how Gemma and Tom resist the situation they are in while trying to deal and it could have easily failed as it is their performances that have to carry the piece.

The Parasite – The aliens who created the suburbs function like the Cuckoo bird. They deposit their young to humans they entrap looking for a home and force them to raise the children. It is a messed up system and the threat of these aliens is constant as they are the only hope the couples who enter the world are offered as an escape. I do have an issue tied to this though that is a con. Beyond them being Cuckoos we don’t have a deeper motivation or an understanding of how they tick beyond this.

The Motivation of the Aliens – As mentioned above these aliens have advanced technology that we never see beyond what they present us with. I wanted to see how they run the illusion that raises their children to bring in more humans to raise their young. We don’t know how long this has been going on and even in the final reveal doesn’t quite delve deep enough into how what they do works. We see the basic of the illusion and motivations but given how short the film is, we should have got more.

This is a film that had the potential to be great with just a bit more development. I could see the theme of life in the suburbs being critiqued but it never felt more than surface so wasn’t worth commenting on. The potential was there, just like the motivation of the aliens beyond using humans to raise their young. This film is still worth your time if you are looking for a good thriller sci. fi. I’m curious to see what this writer and director do next.

Final Score: 8.5 / 10 I would have rated it higher if the motivation of the Parasite Aliens had been explored further. We get hints but not enough on how they work beyond them using humans to raise their young.