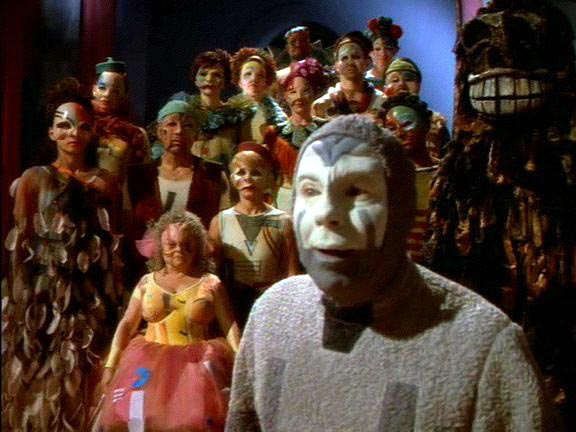 “The Thaw” is an example of quality early “Voyager.” This episode does a lot with less and manages to be both creepy and unsettling. For any person who is afraid of clowns, this is not an episode I’d recommend. As far as vibes, quite a bit of this episode feels like “Twin Peaks” and that only strengthens the overall narrative and stakes. This is an episode where a fantastic antagonist, drives the action of the story. Before I get into spoilers, I definitely recommend this episode to any “Voyager” fans.

The episode was directed by Marvin V. Rush and teleplay by Joe Menosky and story by Richard Gadas.

The story involves the crew following a distress signal and attempting to rescue 3 aliens caught in Stasis. They soon find themselves trapped with them as they face off against the A.I. created by the minds of the aliens and feeds off their fears.

The Premise – The premise is really neat as the idea of alien minds running a computer and from creating the threat that must be faced immediately has stakes. All the Clown that is fear needs is one mind and he can continue living forever and he is far more willing to kill than Voyager. The presentation of fear as being an ongoing carnival run by a clown and his minions is also sufficiently spooky.

The Aliens – The aliens we meet don’t have a name but they are the last of their race as their planet is desolate. All signs point to them being the last of their species making their plight all the more sad. For years all they’ve known is the terror of the clown and I enjoyed their interactions with one another. The biggest issue I have is also tied to them too. This species wasn’t even given a name.

Harry Kim – Harry Kim is active in this episode and is hostile to the clown. He gets punished for it having to relive his fear of being old and sick but he forever fights on. He is willing to die to defeat the clown and we get see just how brave the ensign is as he is the one who has to stay with the Clown when Torres is left out. I enjoyed learning about his past as it was visiting the sick with his mom as a child that made him fearful of it in the first place.

The Doctor – Robert Picardo is masterful in this episode. As a hologram the Clown can’t read his mind and this is used to a fantastic degree. The Doctor shuts down the Clown’s to control the situation and at one point serves as a distraction when Janeway tries to shut down the system. It doesn’t work but he continues to be the negotiator and remains the only being unphased by the Clown and his antics.

Captain Janeway – Captain Janeway is the one who outsmarts the Clown in the end as she comes up with the plan to connect her brain to the A.I. but send in a hologram in her place. It is here that it is revealed she has no fear and that her philosophy as relates to fear is revealed. She tells him he wanted to be defeated as in the end fear is there to be stopped and go away. It was well done and I love how she knows the embodiment of fear is afraid to die as the episode goes back. Kate Mulgrew gives such a fantastic heir of cold confidence, that works really well against the Clown.

The Clown – Michael McKean is brilliant as the A.I. created by the minds in stasis connected to the computer. He is fun, threatening and creepy. Creepy Clowns are popular in horror and his Clown is a great example of why this works. He has a guillotine he uses to execute people and by the time the crew discovers the survivors he had already killed 2 of 5 aliens who had died from fright. His final defeat is rewarding too as he trades the hostages for a chance to gain control over Captain Janeway. It is really well handled and how he negotiates for his survival makes him a great threat.

This is an episode that I’d highly recommend to any “Voyager” fan. The use of tension, horror and the strange work wonders here and McKean’s performance is compelling enough that he can play off any character from the crew. The only con I can really see against it is the fact that the aliens don’t have a name. If they’d been fleshed out a bit more we’d have a better idea of how the tech. came around in the first place, which in turn could give more elements to the Clown. Regardless, this is an episode I highly recommend.